What next for Cambodia's oil dream after KrisEnergy collapse? 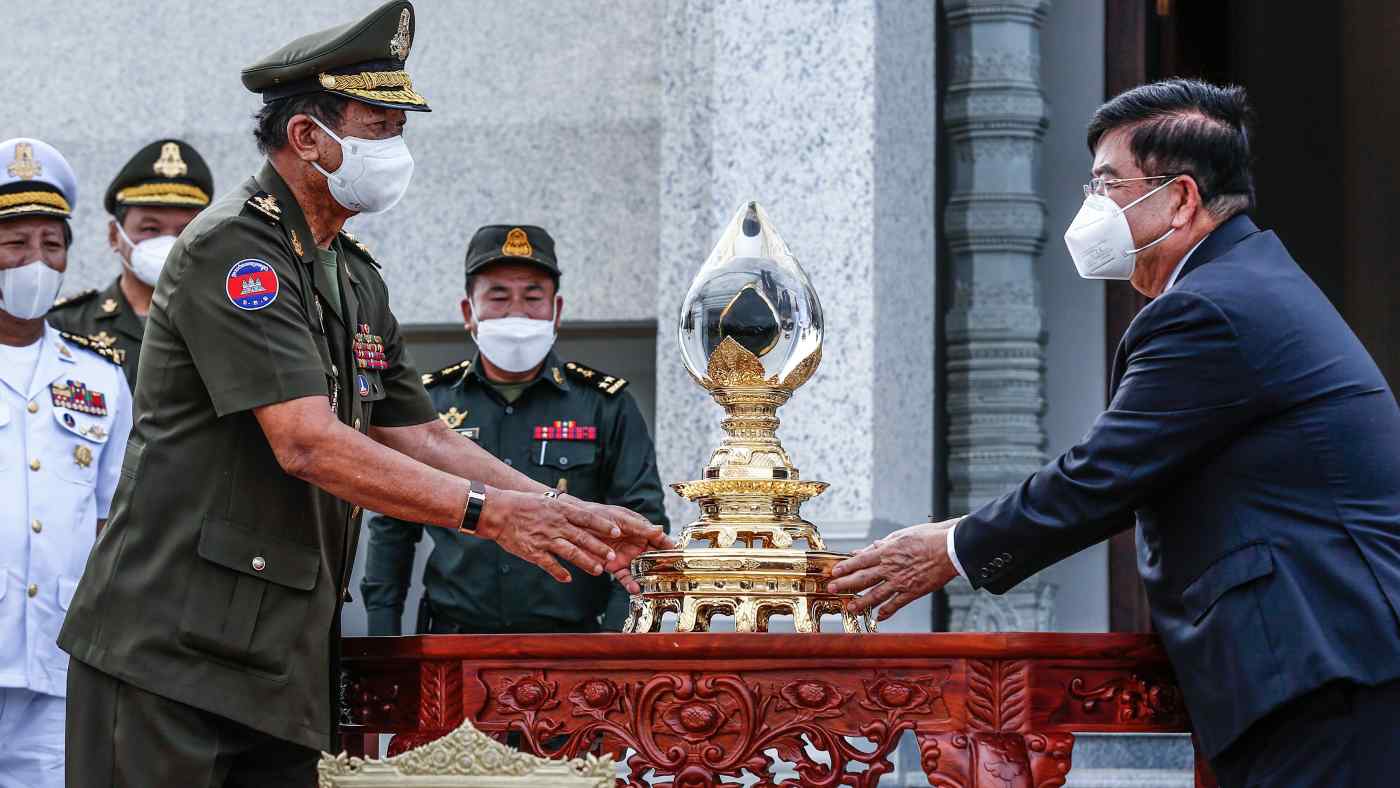 PHNOM PENH -- Encased in a teardrop of glass fixed to an elaborately decorated gold-colored pedestal, Cambodia's first drops of oil were memorialized at a ceremony on Wednesday, six months after being extracted from beneath the Gulf of Thailand.

Presided over by Cambodia's ministers for energy and defense, the long-planned event praised Prime Minister Hun Sen, to whom ultimate credit was given for realizing the country's decadeslong ambitions to pump petroleum.

The timing could hardly have been worse. Less than a week earlier, KrisEnergy, the company operating Cambodia's first and only active oil field, announced it could not pay its debts and would be liquidated.

Tactfully omitted from speeches by ministers on Wednesday, the Singapore-based company's collapse leaves Cambodia facing an uphill battle to make its oil dreams a reality. The major challenge will be finding another operator willing to step in, according to Andrew Harwood, research director at energy consultancy Wood Mackenzie, especially given the uncertain price outlook for oil and the "nascent nature" of the country's regulatory environment.

"Cambodia still holds potential to become an oil producer, but will need to attract new explorers and investment at a time when international oil companies are streamlining portfolios and reallocating capital to renewables and other low-carbon opportunities," Harwood said.

Cambodia's Ministry of Mines and Energy says it is "too early" to discuss the government's next steps. For now, authorities will "follow the terms and conditions" of its production agreement with KrisEnergy, ministry spokesman Cheap Sour told Nikkei Asia, without elaborating. A secretary of state from the same ministry, Meng Saktheara, said on Facebook that KrisEnergy's operations in Cambodia will likely be suspended until the liquidation process is completed and a settlement reached. At that stage, any operator that acquires KrisEnergy's assets and concessions will have to enter discussions with the government to proceed with production, Saktheara wrote.

The company, whose biggest shareholder is Singapore's Keppel, an infrastructure manager, has been struggling to stay afloat for years. Although it has interests in several gas and oil licenses in Southeast Asia, only three are producing assets: the Cambodian Block A concession, also known as the Apsara field; an oil and gas field in Thailand; and an onshore gas field in Bangladesh.

And all three have run into trouble. Production at its Thai oil concession was suspended last year, while in Bangladesh last year, the government ordered cuts to gas supplies to the grid. Then, in April, it was revealed that output from the Cambodia project will fall significantly short of predevelopment forecasts.

The latter development proved the final straw. KrisEnergy had been under court protection from creditors since 2019 as it attempted to restructure debt of more than $500 million, a process that hinged on expected revenue from Cambodia. When it became clear that this money would not materialize, the restructuring fell apart and KrisEnergy lost its protection from creditors.

This month the company filed a winding-up petition with the Grand Court of the Cayman Islands, and three members of Borrelli Walsh, a restructuring, insolvency and forensic accounting services company, have been appointed as receivers of the company's shares and assets. Keppel said last week that it would bear a loss of 318 million Singapore dollars from its exposure to the company.

KrisEnergy directed Nikkei Asia's queries about its assets to the appointed receiver. Patrick Bance, one of the receivers from Borrelli Walsh, declined to comment.

The company had been Cambodia's main hope of pumping oil since 2014, when it bought a controlling stake in the Block A concession from Chevron for $65 million. The U.S. energy giant had held the rights since 2002 but exited after setbacks, including disagreements with authorities on tax and revenue sharing.

Industry expert Mick McWalter, who worked as a consultant for Chevron in Cambodia in the 2000s and later led efforts to reform the country's regulators, said the government had set a "high bar" for fiscal and commercial terms in petroleum development. KrisEnergy's fate could prompt a rethink, he said. "It might be an opportunity for the royal government to consider marginally changing its terms of development, and starting off with a new contractor, so at least some value can be obtained for the people of the nation," he said.

Reserves in the Block A concession, initially estimated at 400 million to 500 million barrels, were once seen potentially generating billions of dollars in revenue. But reassessments over the years have seen their value downgraded significantly, due to low recoverability and the high cost of extraction.

This trend has continued. An independent study commissioned by KrisEnergy and released in April, found that ultimate recovery was likely to be a "small fraction" of forecasts, mainly because there was a significantly lower volume of oil within the wells' reach. The study also cited the area's "geological complexity," which had resulted in smaller oil accumulations.

Jay Cohen, partner and Cambodian director for regional law company Tilleke & Gibbins, said the findings did not bode well for reviving production. They would also reduce the selling price of KrisEnergy's Cambodia assets when it came to liquidation, he said. "It wasn't an enormous find, but they have some oil," Cohen said. "What's more concerning when you look at Cambodia's energy ambitions is KrisEnergy has declared that there doesn't seem to be as much as they thought. Then it goes to: how commercial is this particular find?"

McWalter said any new operator would need "deep pockets and access to [the] latest technologies" to exploit Cambodia's offshore oil reserves, which he said are "abundant [but] quite difficult and expensive to recover."

"For Cambodia, they still have the oil, and one day it might be worth a lot more as crude prices get squeezed during the energy transition," he said, referring to a shift from carbon-based to renewable forms of energy, such as solar and wind.

That window would not stay open forever, he said. "A long-term fear might be that oil production goes out of fashion as we get deeper and deeper into energy transition. The petroleum accumulations of the Khmer Trough may no longer have resource value."

Both McWalter and Harwood, of Wood Mackenzie, said the best chance of attracting operators is the Overlapping Claims Area, a 27,000-sq.-km swath of waters claimed by Thailand and Cambodia believed to be rich in oil and gas.

A 2008 U.S. diplomatic cable released by WikiLeaks indicated that while Chevron doubted the profitability of Block A, it was keen to secure a deal in the OCA should the dispute be resolved. However, progress on that front has been stalled since 2009, when Thailand suspended an agreement to jointly explore the area.

Speaking to Nikkei in 2019, Sour, the energy ministry spokesman, said the two countries' energy ministers had talked and wanted to move forward on the issue. Asked last week whether there had been any progress, he said: "Not yet."