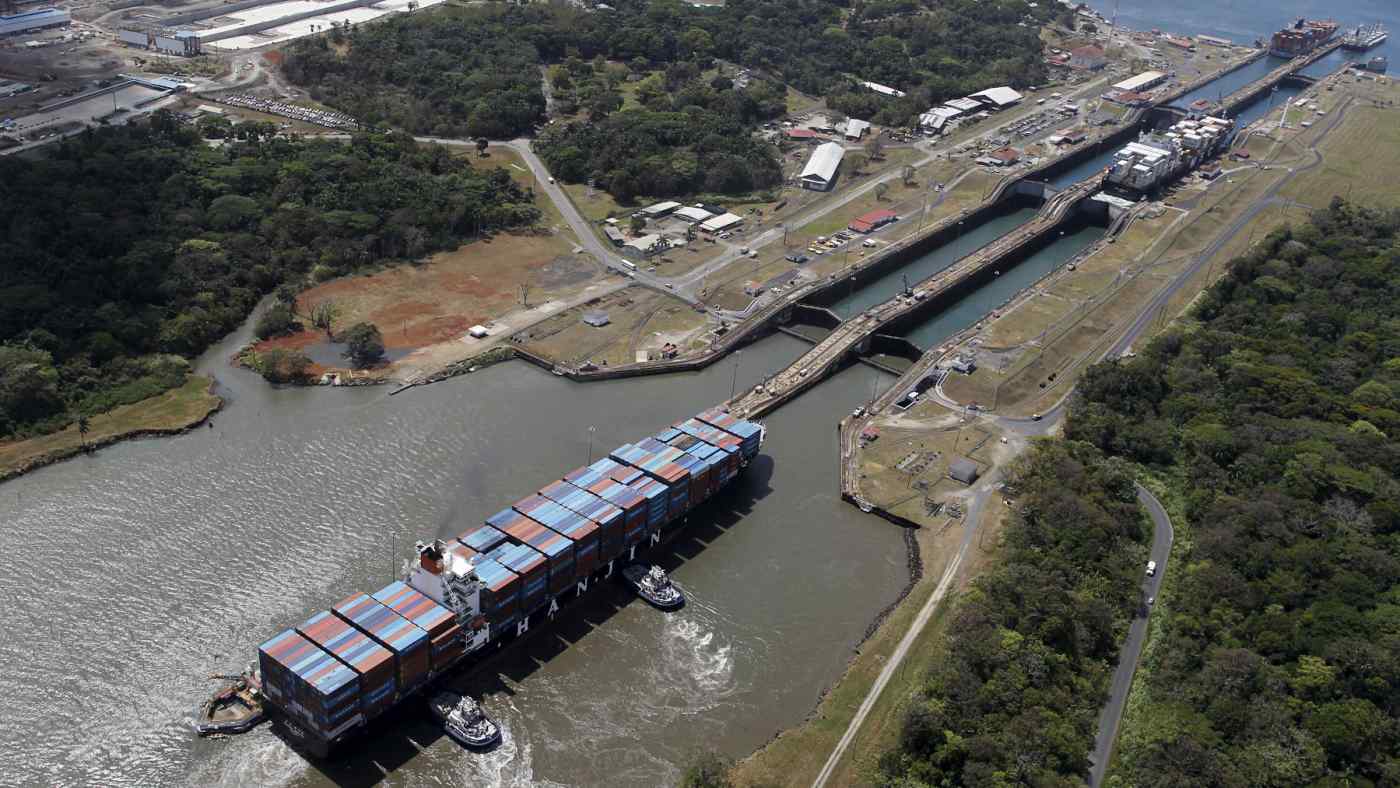 An aerial view of a ship passing the Gatun locks on the Atlantic side of the Panama Canal.   © Reuters
KEIGO YOSHIDA and SHUJI NAKAYAMA, Nikkei staff writersNovember 8, 2019 04:31 JST | North America
CopyCopied

TOKYO/NEW YORK -- U.S. natural gas companies are gearing up to bolster exports to Asia, taking advantage of new transit slots at the Panama Canal to deliver the fuel cheaply and quickly to the other side of the globe.

U.S. exports of liquefied natural gas increased 60% to about 22 million tons for the first eight months of the year, much of it going to Asia. Shipments to Japan jumped 60% as the country seeks to diversify its supply. Exports to Singapore, Thailand and South Korea surged as well, helping make up for a 90% plunge in American shipments to China caused by the trade war.

The canal was widened and deepened under a project completed in 2016. Since then, the Panama Canal Authority has transited up to four LNG carriers in one day, and if necessary it will increase the number of daily transit slots to accommodate strong demand, top administrator Ricaurte Vasquez told Nikkei in Tokyo.

Most American LNG hubs are located on the east coast and along the Gulf of Mexico, meaning the Panama Canal is the shortest and cheapest route for shipments to Asia even with tolls. It takes roughly 32 days to reach Japan from the Gulf of Mexico through the canal, compared with 40 days along the Cape of Good Hope in South Africa.

A total of 399 LNG carriers passed through the canal for the year ended September, compared to just 163 two years before, according to the canal authority. Though some slots remain unclaimed, it expects shipments to Asia to increase further. An aerial view of the 2016 Panama Canal expansion project.   © Reuters

Overall, the canal currently grants eight transit slots a day for large vessels, but it has the capacity for more thanks to the expansion. The new LNG slots will not eat into the passage of other types of vessels, Vasquez said.

Demand for LNG for electric power generation is growing in emerging economies as well since it does not emit as much greenhouse gases as other fossil fuels and can be sourced from a wider range of countries than crude oil.

A number of new LNG export hub projects have launched to serve this demand. The Cameron LNG project, which counts Sempra LNG, Mitsui & Co. and Mitsubishi Corp. among its partners, began liquefying gas near the Gulf of Mexico in May. Freeport LNG in Texas began production on a trial basis in August, with full-fledged operations to start by the end of the year. The two projects together aim to eventually ship over 10 million tons of LNG to Asia annually.

Global LNG demand will increase by 166 million tons versus 2017, to 450 million tons in 2030, according to researcher Bloomberg New Energy Finance. About 86% of the increase is expected to come from Asia.

Increased exports will also help the U.S. tighten the supply-demand balance at home. American natural gas output increased 12% in 2018, according to the Energy Information Administration, and is on track for a double-digit jump again this year. Most of the jump comes from shale gas, a field filled with smaller companies desperate for market share.