Railway car and facility providers from Europe, which have strong historical ties with the Middle East, are leading the race to capitalize on the boom. Chinese makers are also gradually gaining ground in the region. Japanese companies continue to lag.

At stake are contracts related to mammoth railway projects in the Middle East and North Africa estimated to total $300 billion.

Qatar, which is to host the 2022 FIFA World Cup, will soon select contractors for the Doha Metro project. Consisting of four lines, the metro will cover the Greater Doha area and play a central role in efforts to develop an urban transport network ahead of the sporting event. A consortium of Japanese companies that includes trading giant Mitsubishi Corp. is competing for related contracts. 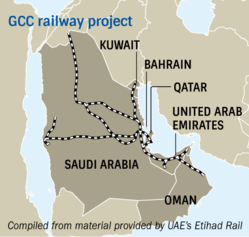 In Saudi Arabia, urban railway projects are underway in Riyadh, the capital, and Mecca. Intercity railways are also being built, including a line between Riyadh and Dammam, a city along Saudi Arabia's Persian Gulf coast, and another running from Qatar's capital to its border with Saudi Arabia.

The region's market for railway equipment has been dominated by leading European producers of railway cars and facilities. These include Alstom of France and Siemens of Germany, each of which is leading a consortium that won contracts for separate lines of the Riyadh Metro.

But Chinese players are starting to catch up, as their expanded operations have made their prices increasingly competitive. CSR has bagged a contract to supply cars for the United Arab Emirates' Etihad Rail, and a major Chinese construction company has clinched a deal to build a monorail in Mecca.

Despite their advanced railway technology, Japanese companies have not done so well. A consortium that includes Mitsubishi Corp., Mitsubishi Heavy Industries, Obayashi and Kajima won a contract for the Dubai Metro; the deal is one of Japan Inc.'s only high-profile victories in the region. Some analysts say this is because Japanese rail companies tend to prioritize closer-to-home Asian markets.

Ed James, a researcher for MEED, a Middle Eastern economic magazine, said countries in the region along with those in North Africa are keen to develop railway networks as their economies continue growing.

The UAE has already started building a railway that will traverse the country, and there is a plan to connect the long-distance railways of the six Gulf Cooperation Council countries.

The GCC railway project calls for the construction of a rail network with a total length of 2,000km at a cost of more than $100 billion.