TOKYO -- David Atkinson wants Japan to make better use of its charms and turn itself into a world-class tourist destination. He discussed his ideas during a recent interview with The Nikkei. Atkinson was born in the U.K. and majored in Japanese studies at Oxford University. In 2009, he joined Konishi Decorative Arts and Crafts in Tokyo, which specializes in restoring cultural assets and national treasures.

He now serves as chairman and president of the company. Before he joined Konishi, Atkinson worked as an analyst at Goldman Sachs for about 15 years. He recently published "Shin-Kanko Rikkoku Ron" (New Strategies for a Tourism-Oriented Country), a book that spells out how Japan can bring in more foreign visitors and in the process build a brighter economic future for itself.

The interview was conducted in Japanese, and the translation was edited for clarity and brevity.

Q: How do you see the Japanese economy?

A: Japan's economy began rapidly expanding in the late 19th century, largely thanks to its technical strength and the hard work of its citizens. But more than that, the growth of its population had the biggest impact on the economy, eventually making Japan one of the largest economies in the world.

However, in terms of per-capita gross domestic product, Japan ranks near the bottom among developed nations, largely due to the inefficiency with which it operates its businesses. In reality, the Japanese economy has remained behind Western developed nations.

Some may argue that Japan is a leading economy in terms of efficiency, considering the Japanese term kaizen, meaning constant improvement, has become recognized worldwide. But this can be applied only to some blue-chip companies, like Toyota Motor. Other businesses, particularly in agriculture, construction, and distribution -- including wholesalers and retailers -- are operated inefficiently. Amid this situation, the country's population has begun to shrink.

Therefore, Japan now should promote tourism, an industry that has been expanding worldwide, and make it a core part of its economy.

Q: The number of foreign arrivals to Japan is on a rapid ascent and is even reaching record highs. Still, the country has failed to become tourism-focused. What do you think Japan's tourism strengths are?

A: Japan is the rare country that fully satisfies all the essential criteria of being a tourism-focused country -- nature, food, culture and climate. But not many efforts have been made to promote these assets.

It's good news that the number of inbound visitors to Japan has nearly reached 18 million, but those involved in tourism rather have to look behind the numbers. For example, no Japanese listed companies are reliant on tourism. Also, contributions from tourism have little impact on the calculation of GDP growth.

Domestic travel businesses tend to focus on handling flocks of [Japanese] tourists during long holiday periods, say, Golden Week, in May. Probably they feel they can do well without catering to foreign visitors. 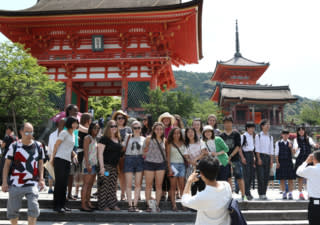 Foreign tourists pose in front of a historical building in Kyoto. The number of visitors staying overnight in the city in 2014 soared thanks to the rapidly growing number of foreign visitors to Japan.

Q: Many Japanese say omotenashi, or hospitality, as well as public safety and punctual public transportation are important tourist draws. Do you agree?

Let me give you some examples. In Japan, it is difficult to find trash bins and enough space for seating at sightseeing spots. Benches are often placed near bus stops and public toilets. I once asked why and got an answer that benches could encourage homeless people to lounge around. If Japan really wants to promote tourism, it has to spend more money to improve the situation.

As for public safety, I don't think it is a must. ... Iceland is said to be the safest country in the world, but it is not so popular among foreign holidaymakers.

Q: Media often apply the word bakugai, which literally means explosive buying, to Chinese tourists in Japan. Their spending sprees now play a certain role in Japan's domestic consumption. Do you see this as a good sign for Japanese tourism?

A: Chinese tourists come to Japan mainly for shopping, not for sightseeing. Some of them buy things [to flip once they get home]. No one would buy 20 to 30 rice cookers just for themselves.

People call it explosive, but their average spending in Japan is about 230,000 yen ($1,897). Chinese tourists tend to spend three times that in the U.S.

Boosting revenue from tourists from neighboring countries may have only a limited impact. Australian travelers are the largest spenders in the world. They typically stay for long periods of time because their country is located away from most travel destinations. Not only the number of visitors, but the length of stay should be taken into account. Also, it is important to attract visitors from developed nations who spend more while traveling.

Q: Japanese are generally good at making things but not at selling them. You have suggested a marketing strategy based on analyses of countries of origin and visitor ages. You have also mentioned how Japan could make its cultural assets more profitable. Could you please give some details?

A: The U.K., for example, promoted the redevelopment of rural areas in the 1980s by restoring cultural properties and opening new hotels.

I think Japanese people should pay more attention to locations such as Atami (a seaside town known for its hot springs that used be a popular holiday destination). Major developers should spend their money on remote islands and in rural areas that are rich in tourism resources, not on office buildings in central Tokyo. Japan has many beaches, but does not have many good beach resorts.

Operators of temples and shrines in Japan have to be more business-minded. They typically hesitate to receive money; I don't think that's a good idea. Probably they are not familiar with the principle that they receive money and offer services in return.

You can get into Nijojo Castle, in Kyoto, which dates back to the 17th century, for only 600 yen. But once inside, visitors have no foreign language signs or pamphlets pointing out interesting features or historical significance. Hase-dera Temple, in Kamakura (another hot spring resort town, not far from Tokyo), charges 300 yen. What can you do with such a small amount?

The time is over for a yes-or-no debate about whether Japan should be a tourism nation. The country just has to do everything it can to make it so.