TOKYO -- Technology companies are increasingly tapping hydrogen to create new energy infrastructure, one example of the resource being put to use is Toyota Motor's recent release of a hydrogen-fueled vehicle. 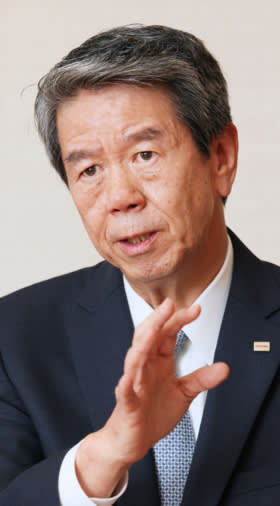 Hisao Tanaka, president of Japanese electronics maker Toshiba, said in a recent interview with The Nikkei that hydrogen is an ideal energy and Japan has a leg up over the rest of the world in developing the field.

Q: Hydrogen, which can fuel cars and generate electricity, is rapidly attracting attention as an alternative clean source of power. What kind of new business is Toshiba planning for the gas?

A: Toshiba has been involved in hydrogen-use research for roughly half a century, starting in the 1960s. As for fuel cells, we started research back in 1978. Our efforts are now finally starting to pay off. For example, we supply more than a half of roughly 110,000 sets of Ene-Farm (household power generation system using fuel-cell technology) in Japan.

Recently, we also succeeded in development of a new independent energy supply system that stores and uses hydrogen generated from electricity produced from solar power. We are now starting a demonstration experiment in Kawasaki City in Kanagawa Prefecture. We intend to launch the system on a bigger scale by the 2020s.

Q: Why did you pursue possibilities in hydrogen?

A: We kept working on hydrogen, because it is possible to transform electricity into the substance for easy storage and transportation, while it does not emit carbon dioxide [in the process]. Hydrogen is in a manner an ideal energy for people. Given the problem of global warming, we need to use energy with as little environmental burden on the planet as possible.

In terms of energy security, use of hydrogen will be particularly useful for countries such as Japan without fossil fuel resources and which are unable to produce enough energy for themselves.

I also expect that hydrogen use will result in new business opportunities. Although it is yet to take off, I feel that the market will grow dramatically in the 2020s, following the Tokyo Olympic Games.

Q: What do we need to become a hydrogen society?

A: We need to do three things. First, we must enhance the energy efficiency of hydrogen at each stage of its use -- including production of the substance, its storage and transportation and then using it to generate electricity. Secondly, we need to reduce the cost of hydrogen and related infrastructure. Thirdly, we must relax regulations.

Private businesses need to work toward the first two points, but the government also needs to play an important role, such as establishing a subsidy program to reduce the cost of using hydrogen.

Also, there are many things that we should do to make regulations more appropriate. The independent hydrogen energy supply system developed by Toshiba, for example, keeps hydrogen gas at very low pressure of around 0.8 megapascal. This is because the law requires us to install a resident controller if a facility uses pressure of 1MPa or higher.

If we could compress the gas to 70MPa like Toyota does with its hydrogen tanks used in its fuel cell vehicle, we would be able to store roughly 9900% more hydrogen in a tank of the same size as the current one.

Q: What is your image of a future hydrogen society? Will hydrogen replace most other sources of energy?

A: I don't think that hydrogen will replace most other energy sources. I expect that hydrogen will be just one of many sources including thermal, hydraulic and nuclear power as well as large-scale photovoltaic generation systems.

Hydrogen is not suitable for use as a large-scale centralized power source like thermal and nuclear power plants. It is better suited for use in relatively small communities. It will be appropriate for use on remote islands where fuel procurement costs are expensive or for distributed power supply in a community. At least, I expect that early hydrogen businesses will start in these areas.

Q: Does that mean that large-scale hydrogen power generation is not feasible?

A: I prefer to use hydrogen generated using methods which stress the environment the least. It would be better to generate hydrogen from renewable energies such as solar and wind power. However, our country [Japan] is not suitable for mass-producing hydrogen from these resources.

To achieve large-scale power generation from hydrogen fuels, it may be good to import and use cheap hydrogen mass produced abroad where photovoltaic generation is much better because of the sunlight available in different climates.

Q: Some say that Japan efforts to develop a hydrogen society may alienate the country and its technologies from the global energy mainstream. What do you think?

A: This view is not correct. Some European countries including Germany and more recently, South Korea, as well as the U.S. state of California have realized the importance of hydrogen technology and have started to work on it.

Japan is a world leader in hydrogen-related technology and already has a leg up on others. Should we stop making efforts in the field, we would lag behind our overseas rivals.

Q: When talking about the energy industry, people seem to associate Toshiba with nuclear power rather than hydrogen. How are you going to balance your nuclear power and hydrogen fuel businesses?

A: Not only do we produce nuclear power plants, but also thermal and hydraulic power plants, as energy needs vary from country to country.

We operate businesses in markets around the world. Our basic approach is to provide a variety of energy alternatives in accordance with customer needs. However, I am convinced that hydrogen energy will play an important role in our strategy.