The rich get richer despite sluggish economy 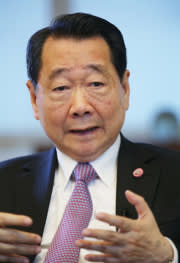 Thanks to a surge in the share prices of Ping An Insurance in China, in which CP Group invested in 2013, the net worth of Dhanin and his three brothers increased to $14.4 billion, up $2.9 billion on the previous year. In January 2015, CP bought roughly 20% of Citic, the Chinese conglomerate's listed subsidiary, in a joint investment with Itochu, the Japanese trading house.

Although Thailand has suffered an economic slowdown over the past 18 months, the total net worth of the 50 richest people listed by Forbes topped a record $100 billion. Expectations of the economy getting back on track pushed up Thai stock prices, boosting the worth of existing billionaires. The group is worth roughly one fourth of the country's gross domestic product.

Sluggish domestic consumption and a drastic drop in foreign tourist arrivals have hurt some billionaires, however. The Chirathivat family, which runs Central Group retail and hotel chains, slipped to third place in the 2015 ranking from top spot the previous year. The family's net worth fell to $12.3 billion from $12.7.

Thai Beverage Chairman Charoen Sirivadhanabhakdi rose to second from third place in 2014. Despite weak domestic consumption, the maker of Chang beer and other beverages has seen strong earnings with net profit growing more than 10% in the first quarter of 2015. With the Thai government tightening alcohol regulations, the company is promoting its non-alcohol and international business interests.

Fugitive former Prime Minister Thaksin Shinawatra was ranked in 10th place again this year. Although his sister, former Prime Minister Yingluck Shinawatra, was banned from politics in January as the military government moved to curb her family's political influence, it retains a strong business foothold. Forbes says the family has interests in at least 25 companies.