Hong Kong property tycoon Thomas Kwok, left, is embraced by his son Adam after being granted bail by the Court of Final Appeal in Hong Kong on July 12.   © AFP-JIJI
Business

HONG KONG -- When Thomas Kwok Ping-kwong walked free on bail of 10 million Hong Kong dollars ($1.3 million) on July 12, emotions ran high. The disgraced property tycoon was greeted by his son Adam Kwok Kai-fai with open arms, and the two spent the next few minutes hugging in front of a sea of cameras and jostling journalists.

"When you have lost something in life like freedom, you know how precious it is," said Thomas, 64, former co-chairman of Hong Kong's flagship developer Sun Hung Kai Properties, who is making a final appeal against his conviction in the territory's highest-profile corruption scandal. The hearing is scheduled for next year.

The mood outside the courtroom was jubilant. The upbeat Kwok, in a brown suit and red tie, gave a thumbs-up and waved to relatives and supporters. But he showed signs of weariness. His trademark black hair had turned pale gray during the roughly 18 months he has served of a five-year sentence.

Kwok's life behind bars was a far cry from his decades of privilege. Raised in one of Hong Kong's most powerful families, he once led Asia's most valuable property empire, whose business also embraces telecommunications and public transport. A running joke among locals is that there is no escape from developers like Sun Hung Kai and its services if you live in Hong Kong.

Sun Hung Kai has long been the bellwether for Hong Kong's property sector. However, the protracted graft scandal has rekindled fears that the group's reputation might be fading as weak corporate and family governance erodes investors' confidence in the decades-old business.

Thomas stepped down as co-chairman and co-managing director after he was sentenced to jail in 2014 for paying HK$8.5 million to Rafael Hui, former chief secretary -- the territory's second-highest official -- to be the group's "eyes and ears" in government. Thomas' brother Raymond Kwok Ping-luen, who shared the top leadership position, was also arrested but later acquitted of all charges. He has since been running the group as chairman.

Thomas' resignation did little to restore the company's image. He publicly stated that he would rather learn to ride a bike and study theology than return to office while on bail. But critics suspect he can still influence the group -- be it through acting as a consultant or appointing close relatives to the board. 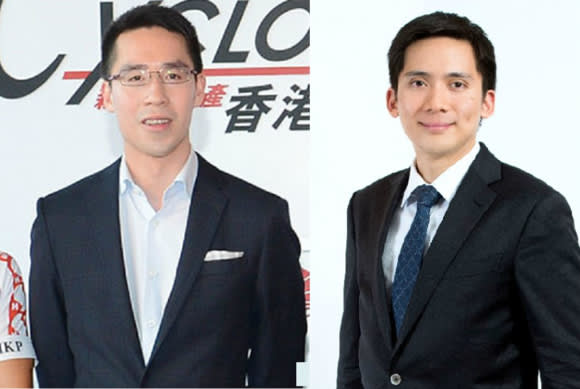 His son Adam became an executive director in 2014, when Thomas was arrested.

This past April, a cousin, Edward, the current chairman's elder son, became an alternative director to the chairman, and another cousin, Christopher, was named executive director.

"Thomas does not need to have an official position to be influential," said Joseph Fan, a professor who researches family businesses at the Chinese University of Hong Kong. "If his family members do not hate him and he still has enough wisdom, he can play an important role behind the curtain."

Sun Hung Kai has distanced itself from Thomas and the scandal. A spokesperson told the Nikkei Asian Review that Thomas would not play any role in the group's business operations.

"It has been made very clear all the time that Sun Hung Kai Properties had never been party to the litigation, which only involved certain individual directors of the group in their personal capacities," said the spokesperson. "To that extent, it will have no impact on the group's corporate governance." Nonetheless, family governance issues have spilled over into Sun Hung Kai's boardroom. Local listing regulations require companies to disclose information that might impact shareholder value, but it is not uncommon for family disputes in listed companies to surface much later.

Tensions at Sun Hung Kai surfaced in 2008 when the eldest brother, Walter Kwok Ping-sheung, was ousted as chairman. It was said to be for a "personal reason." According to various reports, however, the relationship between Walter and his two brothers soured over the years as Walter's behavior grew erratic after he was kidnapped in 1997 and as his decision-making as chairman became influenced by his mistress. Matriarch Kwong Siu-hing, the now 88-year-old mother of the three brothers, took charge of the company before handing over the chairmanship to the younger Thomas and Raymond three years later.

"Family governance in the [Kwok] family is weak, [as it is in] many Chinese business families," said Fan. "Together with a poorly designed trust, they become a deadly formula."

Company co-founder Kwok Tak-seng chose to pass on his effective controlling stake in the company, over 40%, to his wife and three sons in the form of a trust. His intention most likely was to coax his family members into expanding the business by closely cooperating with one another, even after he had left. However, observers like Fan see this form of family ownership as problematic. One reason is that there is not an option for share buybacks among family members in conflict, as the trust is set up as a perpetual entity and its underlying assets are indissoluble. As all beneficiaries are locked in to act in concert, if infighting erupts, it can act as a drag on the trust. That is what happened here.

It seems like rivals learned a lesson from Sun Hung Kai. Li Ka-shing, the octogenarian tycoon who runs the conglomerate CK Hutchison Holdings and its real estate arm Cheung Kong Property Holdings has openly declared that he will bequeath his whole business empire to his elder son Victor Li Tzar-kuoi when he steps down. Lee Shau-kee, another octogenarian founder, of real estate conglomerate Henderson Land Development, has been preparing to divide his empire geographically, with Hong Kong operations going to one son and mainland China operations to the other.

Were an unprepared younger generation to take the reins of Sun Hung Kai, that would be "risky" for the business, Fan said, not to mention the unsettling impact on investors. Even though Raymond turned out to be innocent in the graft case, he was arrested at one point in 2014, leaving both co-chairmen under custody.

On top of that, "if the mother passes away prematurely, it will make a resolution more difficult," Fan added. The mother carries significant sway over her three sons and, subsequently, over the group as a whole. Her early departure would add to the risk factors.

But Sun Hung Kai's business seems barely affected by its boardroom dramas. It is one of Asia's largest developers by market capitalization, which surged to $40 billion as of July 19, nearly double that of Henderson Land. Its value dwarfs the $21 billion market cap of Cheung Kong Property Holdings. 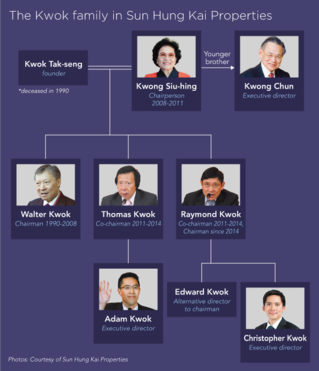 The developer's business outperforms many of its peers, despite reporting a 6.2% dip in earnings to HK$14.7 billion for the six months ended in December, following a property downturn last year.

Rival Hang Lung Properties saw its full-year net profit dive 56% on a sharper sales decline, while New World Development posted a 44% fall in first-half earnings due to its greater exposure to a slowing economy in mainland China.

Home prices in Hong Kong have edged up since April after falling nearly 10% from last September's peak, according to official statistics. In the first six months of this year, overall property sales volume tumbled 40% from a year ago on weaker market sentiment.

Analysts say Sun Hung Kai's balanced portfolio -- with recurring rental revenue from commercial properties accounting for 50% of earnings -- has helped cushion market volatility. It is the owner and builder of several landmark assets on Hong Kong's skyline, including the two tallest skyscrapers, the 118-story International Commerce Center and the 88-story International Finance Center.

"Cheung Kong Property has more piecemeal assets scattered around the city, but Sun Hung Kai is more concentrated in developing something recognizable that will create synergies among its different pieces of assets," said Phillip Zhong, a senior equity analyst at U.S.-based Morningstar.

In mainland China, Sun Hung Kai says it has a selective strategy of investing in prime commercial properties in top-tier cities. While its China operation currently contributes to about 10% of operating profit, most expect the developer to accelerate its expansion there.

Following its successful transfer of the ICC and IFC model from Hong Kong to China, the developer will complete by the end of this year a massive commercial project in Xujiahui, a prime downtown district of central Shanghai that is getting a facelift thanks to a government redevelopment plan.

The developer has also been among the most aggressive in project launches in Hong Kong this year. It is rolling out eight projects, including several mass residential projects in suburban areas bordering mainland China. These complement its regional malls, which are popular with day-trippers from the mainland. 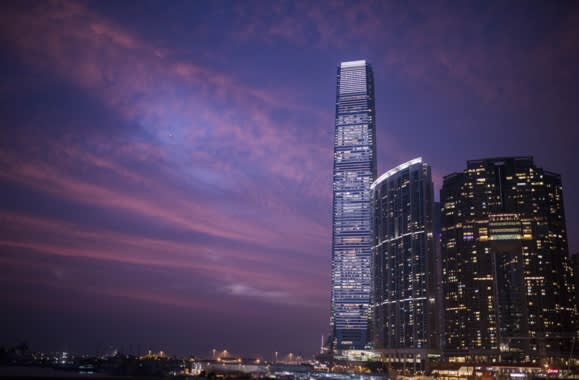 To drum up sales, Sun Hung Kai has offered home loans of up to 120% of a property's value to lure buyers into one of its projects. Those who own a flat as collateral will qualify for the mortgage discount, which is widely seen as a means to bypass the government's market-cooling measures that limit standard bank mortgages to 60% or less of a property's value.

Others have described Sun Hung Kai's tactics as a desperate move to meet sales targets and shed inventory ahead of economic uncertainties. But Deputy Managing Director Victor Lui justified the group's approach, saying its property sales already exceeded HK$15 billion, slightly less than half of its full-year target.

"Brexit has spurred Hong Kong's property market as investors will try to hedge against risks by buying into bricks and mortar," Lui told reporters on July 19. "We can expect quite a lively property market in the second half of the year." Sun Hung Kai's shares have gained more than 20% since the U.K. voted in late June to leave the European Union, while losing 12% over the last 12 months, slightly outperforming the benchmark Hang Seng Index. Its share performance beat most of its property rivals in the last six months, although it is trading at a historic low price-to-earnings ratio of around 10, against the industry average of 12 to 15.

"The company's prospects are being discounted too much [given] that there is so much negative news coming out of the residential market," said Morningstar's Zhong. Even so, some institutional investors might shy away from Sun Hung Kai because of its governance issues, he suggested.

The research and investment firm maintains Sun Hung Kai and Cheung Kong Property as its favorite property stocks in Hong Kong, but prefers the latter, calling it a pure play with a relatively clean image.

"The corruption charges didn't really affect the company's performance," said Zhong. "Yet it's more an issue of confidence and how investors may ... perceive it as having more risks versus some of the other names."

Strolling out of the courtroom the other day, Thomas said that first he wanted to dine with his aged mother and tell her, "I have returned, mom." Then he would like to have his hair dyed. By putting his family first, perhaps Thomas, upon his return, can keep any feuds from cropping up.