TAIPEI -- The shares of Taiwanese airline Eva Airways fell over 2.5% on Monday as the family of Chang Yung-fa fought for control of his transportation empire following his death on Jan. 20. 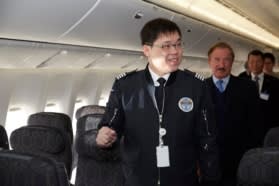 Chang Kuo-wei was piloting a company aircraft to Singapore when he was ousted as chairman of Eva Airways on March 11 by his older siblings.

Evergreen Group, the family conglomerate that includes the airline and Evergreen Marine, has seen serious conflict between the children of Chang's two wives. Chang had a daughter and three sons by his first wife, and a son by his second wife. His first wife and daughter have both passed away.

Chang Kuo-wei, a qualified pilot and the youngest son, was ousted as chairman of the airline by his older siblings, and was piloting a flight to Singapore when they held an unscheduled board meeting last Friday. His siblings together own more than 30% of the shares compared to his 11%, but he retains his seat on the board.

Following his ouster, Chang Kuo-wei told reporters that his father had left all his fortune to him in a written well. Forbes magazine in 2015 estimated Chang Yung-fa's personal wealth at $1.6 billion. Daniel Song, Chang Kuo-wei's lawyer, told the Nikkei Asian Review on Monday that he could not confirm this figure as he has not seen a detailed record of assets.

Song added that his client is very depressed and considering resigning from the airline's board. The 45-year-old is widely viewed as the airline's public face. In November, he announced plans to purchase 26 new Boeing aircraft in a deal worth 260 billion New Taiwan dollars ($8 billion), the largest order ever in Taiwanese commercial aviation.

Chang Kuo-wei's removal is seen as a maneuver by his half brother Chang Kuo-hua, 60, to take control of Eva Airways and Evergreen Marine, Evergreen Group's flagship listed companies.

The two companies booked revenue totaling NT$271 billion in 2015, and have a combined market capitalization of around NT$112.8 billion.

The family feud broke out on Feb. 18 when Chang Kuo-wei publicized his father's written will, which he said made him Evergreen Group's new chairman and sole successor. His siblings immediately struck back by shutting the Evergreen Group headquarters.

Since Chang Kuo-wei only controls a minor stake in Eva Airways, it will be hard for him to recover his position there, said Venson Tsai, an analyst at Cathay Securities in Taipei.