Internet of things changing how entire plants are operated TOKYO -- Industrial robot maker Fanuc's one drive to integrate internet-of-things technology into its products has been spearheaded by its U.S. unit.

Late last year, Fanuc America released a new painting robot for cars and components with the distinctive feature of being able to monitor its own operation -- gathering data on factors such as wear and tear on the joint gears.

The company has released the new robot to tie in with the growing popularity of its "Zero Down Time" robot management service. Through Cisco Systems' communications equipment, ZDT collects data on robots in operation every 90 seconds to detect changes that could lead to problems or time being spent idle. It monitors the movement of motors and welding guns and notifies customers of any issues or wasted electricity.

As of the end of February, more than 10,000 ZDT units were in operation, triple the number from a year ago. Customers include well-known U.S. automakers such as General Motors as well as various tech companies. 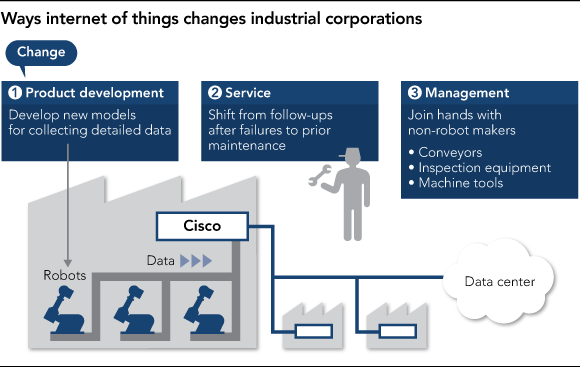 A growing number of companies are adopting ZDT, and the service is being used to make decisions on issues such as product development, Fanuc America President and CEO Mike Cicco said.

The system has been taken up far more in the U.S. than in Japan or Europe, largely because it was developed by the Michigan-based local unit.

The company started measuring down time with a customer in 2013 by collecting data manually, said Jason Tsai, one of the developers of the service. With greater amounts of data needing to be collected, the partnership with Cisco was set up in mid-2014, creating a system which extracts and analyzes data automatically.

Back then, U.S. hedge fund Third Point acquired a stake in Fanuc and urged the robot maker to make better use of its cash reserves, such as stock buybacks. Despite opposition in Japan, the company went ahead with measures in the U.S. to better cope with the coming age of the internet of things.

ZDT has had a profound effect. Last year, GM the system's largest customer, noticed a behavior change in six robots which helped detect uncoated areas and parts coming off.

Marty Linn, manager of advanced technology and principal engineer for robotics at GM, said it is important to detect down time as taking a single robot out of the chain means no cars can be produced.

The system accumulates analysis methods as it operates. In theory, the more experienced ZDT becomes, the less likely it is to break down. For the service department, which is dispatched to customers upon receipt of a problem notification, it is becoming increasingly important to decide on the best time for repair based on the data collected.

Fanuc, however, is also facing new challenges. Many customers have said it is often not the robots that need attention, Cicco said.

If other equipment, such as conveyor belts, machine tools and inspection devices break down and cause work at whole plants to be suspended, the benefits of ZDT do not amount to much.

For this reason, Fanuc is calling for cooperation with more than 200 Japanese industrial equipment makers and is reportedly also in talks with 30 to 40 companies in the U.S.