Fanuc boss says robots are here to help us, not replace us

TOKYO -- Industrial robots are getting smarter, thanks to the rise of artificial intelligence. They are also getting better at collaborating with humans. But is it only a matter of time until they nudge us out of the workplace picture entirely? 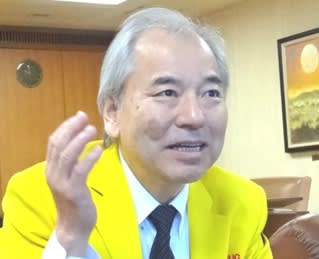 The Nikkei spoke with Yoshiharu Inaba, president and chief executive of Japanese industrial robot maker Fanuc, about how robotics will change manufacturing.

Q: Industrial robots proliferated in Japan in the 1970s. Sony's Aibo and other consumer-oriented robots created a buzz in the 2000s. Now the country seems to be in the midst of another robotics boom. What's different this time around?

A: Prime Minister Shinzo Abe is strongly supporting robotics as a key pillar of his growth strategy. I think this is drawing more attention to the industry. Customers are increasingly interested in introducing robots to the workplace.

Meanwhile, the public will continue to grow more familiar with robots, thanks to SoftBank Group's Pepper and other service-focused humanoids.

Q: What are the hottest trends in industrial robotics?

A: I see two main trends. One concerns human-friendly robots -- for example, machines covered with soft materials and equipped with sensors to stop them when they touch a person.

For safety reasons, robots in the workplace are usually isolated with fences. But human-friendly robots can work together with people in the same area, collaborating on tasks. This gives factories more flexibility in planning their production lines.

We are also seeing significant advances in artificial intelligence. This allows robots to watch and learn, improving their capabilities. Put another way, it brings robots one step closer to humans.

In addition, we are working on a system in which networked robots distribute duties among themselves.

Q: What is your next goal?

A: We want to achieve a wider range of precise movements. Robots can move with great accuracy, but they are not very flexible. For example, they are not sophisticated enough to hold a soft cable and screw it into a particular spot.

We are also working with Cisco Systems of the U.S. on defect prediction. We actively bring in external skills and technologies that can help our development. This includes promoting collaborations between industry and academia.

Q: Are robots about to spark major changes in manufacturing?

A: I think so. Production sites will dramatically change over the next several years. Last year, we launched a human-friendly robot that can carry loads up to 35kg. This will help to reduce the workload of women and the elderly.

Applying AI technology will also help to cut down on time-consuming programming of robot behavior, or teaching. This will further promote the use of robots not only for manufacturing but also logistics and food production.

Q: Do you think robots will eventually replace humans in the workplace?

A: Robots are tools to make our lives better and easier. They reduce the time we must spend on routine tasks, giving us more time to focus on process control and other managerial duties. Robots will not replace us completely.