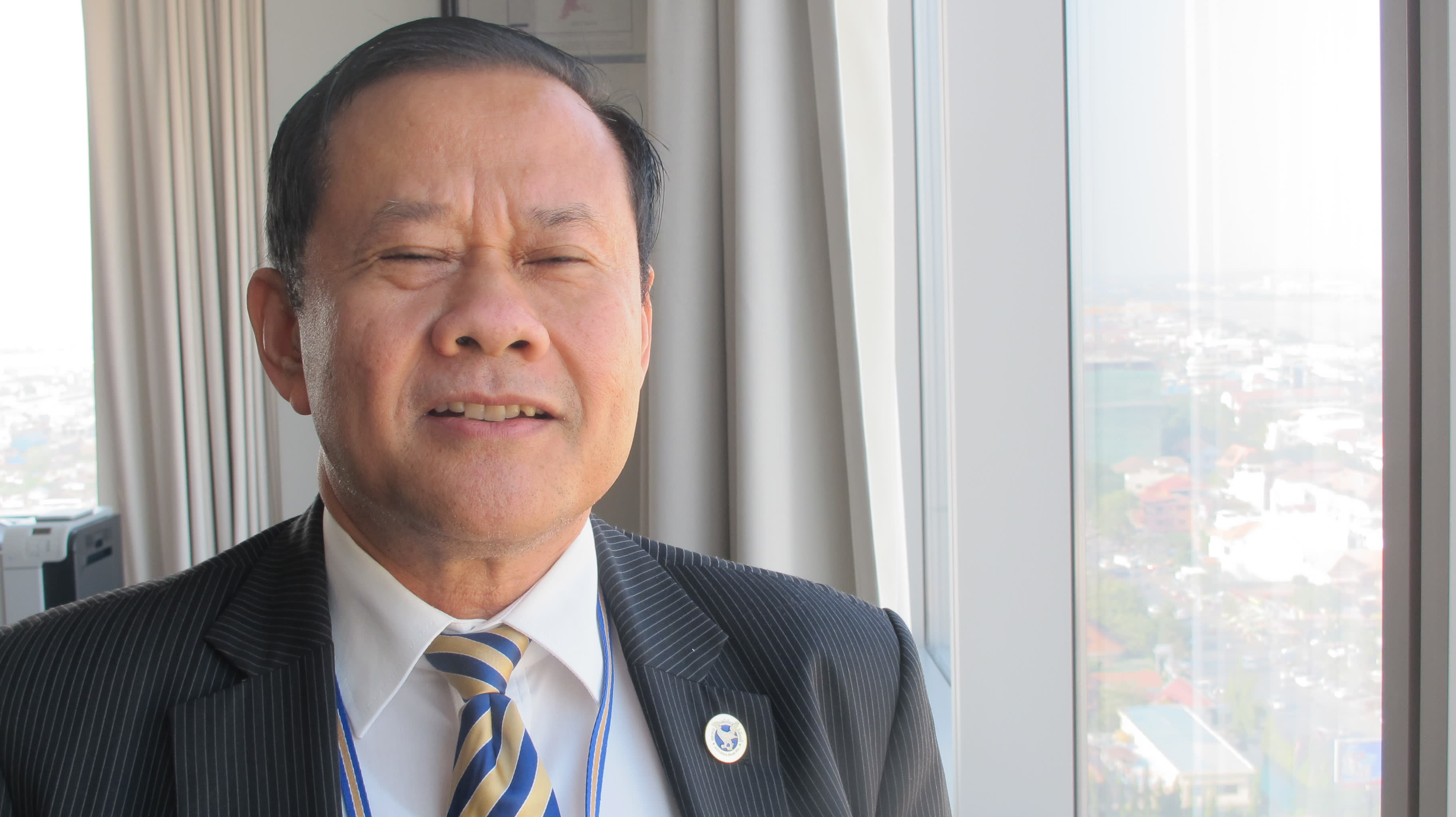 PHNOM PENH -- When In Channy took over the Association of Cambodian Local Economic Development Agencies (Acleda) in 1993 he found himself managing an odd assortment of loan officers. "I was from a refugee camp in Thailand, some of my colleagues used to work for the government, and others were from the non-communist resistance movement, so we were from multi-backgrounds," Channy recalled. "But I asked them all to avoid criticism and the misuse of funds."

Channy, 56, is now Cambodia's best known banker, having overseen the transformation of Acleda from a tiny nonprofit microfinance institution with about $13,000 in funding from the United Nations Development Program and Agence Francaise de Developpement into the country's biggest bank.

As president and group managing director of Acleda Bank Channy has a uniquely Cambodian background. At the age of 14, he was forced to end his studies in Phnom Penh and join the Khmer Rouge's rural utopia, which lasted from 1975 to 1979. He survived those years minding a herd of 320 cows and then spent another decade at Site Two refugee camp on the Thai-Cambodian border, where he finished his high school studies and earned a degree in advanced education through a U.N. program before winning a scholarship in 1989 to study at Gwynedd Mercy College in Pennsylvania, U.S. Acleda Bank headquarters in Phnom Penh, after changing their logo on the government's order. (Photo by Peter Janssen)

Channy returned to Cambodia in 1992, joining Acleda and continuing his education via study stints in Phnom Penh and abroad, including the Financial Institutions for Private Enterprise Development course in sustainable banking and finance at Harvard University. But his management style has always been bottom-up, starting with the bank's lending policy.

Acleda initially provided very small loans (sometimes only $50) to poor farmers. When loan officers visited the farmers to make appraisals, they were often offered food and drinks. "Some staff said, if we refuse their offer it goes against local culture, but other staff said we should not accept because it is a burden to the farmers," Channy recalled.

Solomon-like, Channy decided to try both systems for three months, allowing one set of loan officers to accept farmers' gifts and requiring another group to refuse them. He then assessed the loan performance of both teams. "We found that the people who ate and drank had problems with loan repayments, and the other group had no problem. That was the start of our policy of zero tolerance for corruption," Channy said. In 2016 Acleda Bank's non-performing loans amounted to 0.68% of total lending -- a small proportion by global standards.

The rapidly expanding Cambodian economy grew by 7% in 2016, and is projected to grow a further 7.1% in 2017, according to the World Bank. But agricultural prices were down in 2016, increasing the value of nonperforming loans in the banking system, which nevertheless remained well below 2% of total lending. Credits to the property and construction sectors slowed after the National Bank of Cambodia, the central bank, raised minimal capital requirements for the sector in March, 2016 in a bid to rein in loan growth, which had been averaging 30% a year.

Cambodia's property sector has been overheating, fueled primarily by Chinese investments in condominium projects catering to overseas Chinese buyers. However, although some of Cambodia's 51 commercial and specialized banks may be overexposed to the sector, Acleda claims to be immune to its problems. Property loans account for only 7.5% of its loan portfolio, and the bank has a policy of lending only to first-time home-owners, to avoid involvement with speculators. The majority of its property loans are in rural areas, where average housing loans average about $23,000, compared with $300,000 in Phnom Penh and other urban centers.

Despite its status as a commercial bank, Acleda has kept its provincial roots, with microfinance accounts making up two-thirds of its 440,000 customers, but only about 9% of its loan portfolio. Loans to the agricultural sector account for 19.7% of all loans. Microfinance loans average about $1,200 per family, with a one-year payback period. As its customers' businesses have grown, many have graduated into small and medium-sized enterprises, as the bank categorizes business customers borrowing more than $2,500.

"In Channy gives his investors and his funders enormous confidence, and that is the driving force that has made Acleda what it is," said John McKinley, the former head of strategy for ANZ Bank in the Mekong Delta region, who is now managing partner of Mekong Strategic Partners, a Phnom Penh-based private investor and financial consultancy. Part of Acleda Bank's financial success is based on strong support from foreign shareholders, which include Sumitomo Mitsui Banking of Japan, Banque Populaire of France, Orix of Japan and Triodos Bank of the Netherlands, which collectively hold 49% of the bank's equity.

The bank's remaining equity is held by Acleda Financial Trust (25.2%) and Acleda Staff Associations, representing the bank's 12,325 workers, which has the largest single stake, with 25.8% of the shares. Channy sees this as a good way to build up staff loyalty and spread the wealth generated by the bank. "If you invest in a bank deposit you get 5% fixed per annum, but if you invest in the bank you get 20%," Channy said.

Having succeeded in Cambodia, Acleda has been expanding its operations abroad since 2008, when it won a commercial banking license in neighboring Laos. Today it boasts 41 branches in Laos, with branches in 16 of the 18 provinces. "Most of the other private banks [there] only have branches in Vientiane, [the capital,] so this is where we are unique," Channy said.

Acleda is also targeting small and medium sized enterprises in Laos, with some success. Nonperforming loans accounted for about 1.2% of the bank's total lending in the country last year. As in Cambodia, land is the primary form of collateral. "We use land deeds. It works fine in Laos," said Channy.

In 2013, Acleda expanded to Myanmar, as a microfinance institution, ignoring Myanmar's decision a year later to award commercial bank licenses to foreign institutions for the first time in decades. "We saw more opportunities in microfinance because as a commercial bank there you can establish only one office and are limited to corporate lending," Channy said.

The bank has quickly set up six offices in Myanmar in six different provinces, and Channy sees huge growth potential in the country, which has a population of more than 53 million people, compared with Cambodia's 15 million. "Now we are at the microfinance stage, but next we will target a commercial bank when the regulations are more conducive to growth, and then there will be big room for expansion in Myanmar," Channy said.

In both Laos and Myanmar, Acleda has stuck to its policy of zero tolerance for corruption -- a stance that has apparently also won the bank the trust of the Cambodian government, which uses Acleda to manage its revenue and expenditure accounts and to handle the payroll for teachers nationwide.

The relationship has not, however, led to special favors. In February, the bank was ordered to change its logo -- featuring a mythical golden bird -- because it was regarded as too similar to the logo of the Ministry of Economy and Finance. The switch, which affected signage on 259 branches nationwide, cost the bank an estimated $3.5 million and one worker his life (he was electrocuted when trying to reach the bank's sign).