Fending off France's colonization of Nissan

TOKYO -- Carlos Ghosn, CEO of Nissan Motor and Renault, is facing crisis regarding the Japan wing of partnership he leads being "colonized" by the French government. France is now Renault's largest shareholder, following a decision to double its voting rights for greater management control.

According to a person familiar with the matter, Ghosn went to Italy last summer for a covert meeting with someone from Italy's prestigious Agnelli family. The family founded major Italy's Fiat and still has great influence over the company's management. 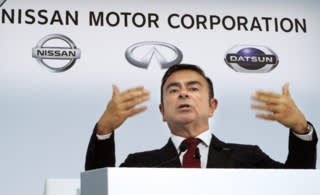 Carlos Ghosn, CEO of Renault and Nissan Motor, announces earnings for fiscal 2014 in Yokohama, Japan, on May 13.

Fiat bought U.S. Chrysler in 2009, its current official name is Fiat Chrysler Automobiles. When Ghosn visited Italy, speculation was spreading in the global auto industry over an industry reorganization related to Fiat. Some speculated that FCA had entered tie-up negotiations with Germany's Volkswagen while others assumed that FCA was negotiating with France's PSA Peugeot Citroen.

The Renault-Nissan alliance is the fourth-largest presence in the global auto market with sales of about 8 million. If the alliance swallows FCA, its global sales will reach more than 13 million, becoming the world's largest.

It is not the first time Ghosn has shown an appetite for realignment toward a global-scale mega industry. Though unsuccessful, he negotiated with GM for a capital tie-up about a decade ago. His purpose of industry realignment is not just making the Nissan-Renault alliance solid by expansion. A former executive of the Renault-Nissan alliance said that Ghosn is trying to weaken the French government's clout regarding Renault.

Pain in the neck

The relations between the Renault-Nissan alliance and the French government have been built on a delicate balance since the alliance was forged in 1999. 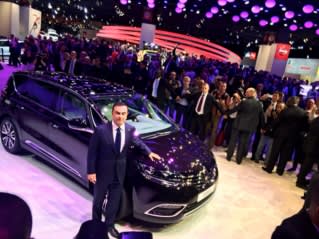 In other words, the French government is the shareholder with the greatest say in the Nissan-Renault alliance.

If the alliance merges with any major global automaker such as GM or FCA, each company's current shareholder stock will be significantly diluted in the course of the realignment. That would mean a lower ratio of capital contribution by the French government in Renault and more management freedom for Ghosn.

When the European financial crisis occurred about five years ago and caused Renault's earnings to plummet, Ghosn hammered out bold restructuring measures like the ones he showed when he rebuilt Nissan. But the measures were halted by the French government.

At the mercy of France

On April 30, Renault held a shareholder meeting in Paris. Ghosn, who chaired the meeting, calmly read out that a Renault's proposal was voted down. 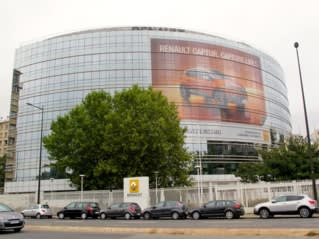 The French government's tighter grip on Renault is not irrelevant to Nissan, as over one-third of voting rights within the Japanese carmaker are owned by the French company.

The two automakers have also integrated parts procurement and development of new cars. But in reality, of the 8 million cars offered by the Renault-Nissan alliance, more than 5 million are made by Nissan. If Renault management is affected by the French government, Nissan may be "treated as a colony."

In fact, Nissan has decided to pump out more than 130,000 units of its mainstay Micra compact every year at a Renault factory in France starting 2016. The Japanese automaker initially planned to manufacture the compact vehicle at the Renault-Nissan alliance's Indian factory, which has lower production costs.

But a company insider says Nissan was pressured by the French government, which wants to maintain domestic employment.

Too late for a break up

"It's too late to separate from Renault. We have no choice but to leave it up to Ghosn," said a middle-ranking Nissan official. Also, a young Nissan employee said, "Deeper ties with Renault, such as the unification of production and development, is nothing short of existing procedures." 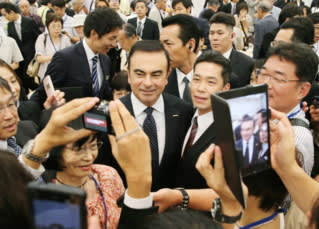 Ghosn is surrounded by shareholders in Yokohama in June 2014.

Last year, the resignation of some foreign executive officers received much attention. But Nissan's management, after all, depends on Ghosn.

Another important bill for extending the CEO's retirement age was suggested to shareholders at the April's Renault shareholders' meeting. Ghosn gained approval with a support rate of more than 85%.

Conventional rules stipulated that Renault's CEO has to retire at 65 and Ghosn, 61, had only four more years in office. But new rules allow Ghosn to serve as CEO until 2022, when he turns 68. He has been CEO of Nissan for 14 years and Renault for 10 years. He made a strategic move to lengthen his reign.

During his remaining term as CEO, he will enter the final phase akin to a battle for independence from the biggest shareholder, the French government, over the freedom to manage.