Banks in Southeast Asia are wary of business closures and bankruptcies as the spread of the coronavirus causes economies to stagnate.
DYLAN LOH, Nikkei staff writerMay 8, 2020 13:31 JST | Southeast Asia
CopyCopied

SINGAPORE -- Across the Association of Southeast Asian Nations, banks are bracing for a tide of nonperforming loans as the coronavirus pandemic rattles companies' cash flows and creates difficulties in repaying debt.

Singapore-based Oversea-Chinese Banking Corp. on Friday said its net profit for the first quarter ended March tumbled 43% year-on-year to 698 million Singapore dollars ($495 million), as it increased its total allowances by 165% to SG$657 million from SG$249 million a year earlier due to oil and gas exposure and worsening economic conditions.

"We paid close watch on our credit portfolio against the market uncertainty, and significantly shored up our allowances on a forward-looking basis," OCBC group CEO Samuel Tsien said. While the bank's nonperforming loan ratio held steady at 1.5%, OCBC expected it to rise to between 2.5% to 3.5% on "near-term economic weakness and uncertainty."

Credit rating agencies, including Moody's, in April began downgrading the outlook for banks in the region, despite efforts from governments to roll out billions of dollars' worth of stimulus packages to save businesses.

"The economic and market upheaval caused by the outbreak will depress business activity and increase banks' asset risk," Moody's said in a report released on April 2.

"It boils down to deteriorating market sentiment about credit and recession risks," said Wilson Teo, customer success manager for the Asia-Pacific region at financial market data provider Refinitiv. "Companies will struggle as the coronavirus takes its toll on the economy. That makes interbank lending more risky since banks tend to suffer losses if companies fail."

In its global economic outlook released in April, the International Monetary Fund projected that the five largest developing economies among the 10 countries in the Association of Southeast Asian Nations -- Indonesia, Thailand, Malaysia, Philippines and Vietnam -- would contract by 0.6% in 2020. It had estimated in January economic growth of 4.8% for those five countries. The four largest commercial banks in Thailand -- Bangkok Bank, Siam Commercial Bank, Krung Thai Bank and Kasikornbank, which all have a relatively higher nonperforming loan ratio of between 3.2% and 4.4% -- will increase provisions to prepare for bankruptcies caused by the coronavirus pandemic.

"The COVID-19 pandemic is taking a toll on people and the private sector," said Arthid Nanthawithaya, chairman of the executive committee and CEO of Siam Commercial Bank. "It also poses significant challenges to the banking sector, both in terms of revenues and asset quality, which will become apparent in subsequent quarters."

Siam Commercial Bank is also canceling its 16-billion-baht share repurchase program, saying the decision would give it flexibility to seize potential business opportunities that may arise from the crisis.

Thai banks decided in late February to offer coronavirus-hit companies a yearlong grace period on loan repayments. Individuals who are laid off and have mortgages are also eligible for the same grace period.

Don Nakornthab, senior director for the economic and policy department of the Thai central bank, said the sector had enough capital buffer for a potential upsurge in bad debt and debt restructuring cases stemming from the coronavirus outbreak, according to local media. 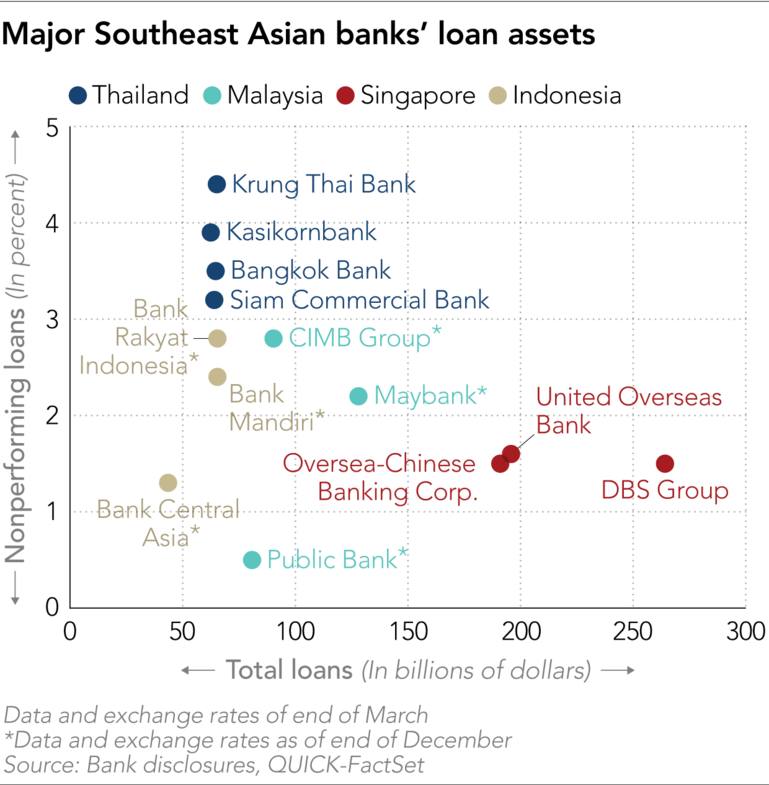 Fitch Ratings, however, downgraded the outlook for Thai banks to "bbb" from "bbb+" and noted that as the duration of the pandemic remained unclear, the impact on business for banks looked "sharply negative." The agency revised down the long-term issuer default ratings of Bangkok Bank, Kasikornbank, Siam Commercial Bank and Bank of Ayudhya.

"The banking sector's performance indicators had already been weakening over the past few years due to muted economic conditions, sustained low interest rates, and competitive forces that reduced growth in fee income," Fitch said. "The coronavirus outbreak has added considerably to these pressures."

In Singapore, seen by many analysts as a bellwether for the region, cracks have started to show. Southeast Asia's largest lender DBS Group Holdings booked a net profit of SG$1.17 billion in the first-quarter -- a 29% dip from a year ago.

It set aside a further SG$703 million in general allowances for risks arising from the pandemic, raising the total provisions set aside by 29% to SG$3.23 billion. The bank is also exposed in terms of loans to embattled oil player Hin Leong Trading to the tune of $290 million.

Hin Leong buckled as oil prices tanked from drastically reduced demand as the pandemic shut down economies across the globe. That only served to worsen conditions in an already oversupplied commodities sector. It made lenders think harder about lending to the industry.

"We are getting a lot more focused on making sure that documentation around trade finance... we are being a lot more disciplined around that and trying to make sure that the due diligence around that is indeed tightened up," DBS Chief Executive Piyush Gupta said at a results briefing on April 30.

Another Singapore lender, United Overseas Bank, has reported net earnings of SG$855 million for the first quarter, 19% lower than the same period last year, and set aside an additional SG$546 million in reserve allowances. OCBC on Friday said it upped allowances with room specifically made for a "Singapore-based corporate customer in the oil trading sector" to the tune of SG$275 million.

In Indonesia, Southeast Asia's largest economy, the hit on commodities has also been felt. Moody's slapped a negative outlook on the country's banking system, noting that economic conditions will weaken demand for coal and palm oil -- key export products for the country.

"Asset risks from commodity-related loans will increase as demand for commodities weakens," Moody's said. "Capital outflows will continue to pressure the rupiah, hurting borrowers with unhedged dollar loans," it added. But even as the risks increased, the agency also said that Indonesian banks have enough buffer.