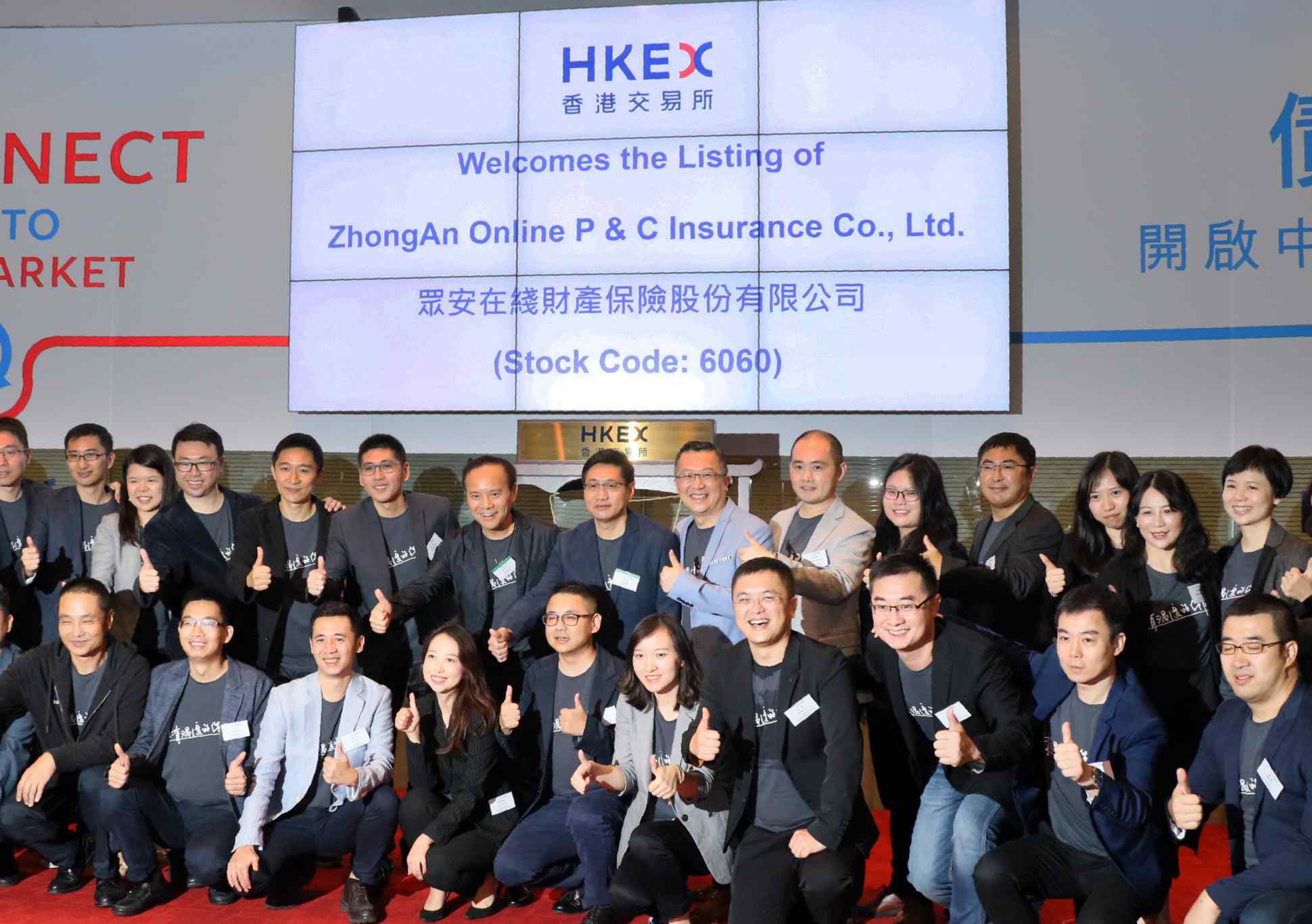 Menmers of ZhongAn Online P & C Insurance pose for the photo session to mark the company's debut on the Hong Kong Stock Exchange in Hong Kong on Sept. 28. (Photo by Shinya Sawai)
Finance

HONG KONG -- When the heads of three of China's most prominent companies join hands to launch a start-up, investors notice.

Jack Ma Yun of Alibaba Group Holding, Tencent Holdings' Pony Ma Huateng, and Peter Ma Mingzhe of Ping An Insurance Group -- collectively known as the "three Ma's" -- did just that. Looking to turn Ping An into a full-blown financial technology company within ten years, Peter also enabled the growth of Lufax, which started as a peer-to-peer lending platform in 2011 and became one of the most valuable e-finance company worldwide as of September.

Four years ago they founded China's first online-only insurer. It was a company with an untested business model and making no money, but it sparked an investor frenzy. 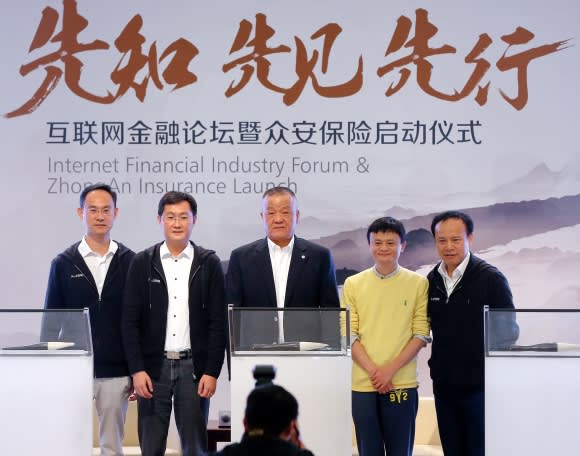 ZhongAn Online P&C Insurance began trading on the Hong Kong Stock Exchange on Sept. 28 after raising $1.53 billion from Hong Kong -- making it the largest initial public offering in the city this year and the 10th-largest worldwide. Shares of ZhongAn -- the first financial technology, or fintech, offering in the city -- jumped more than 9% on Thursday to 65.20 Hong Kong dollars ($8.35). On Friday, they declined 2.7% on profit taking.

"Such market response was not unanticipated," Alvin Cheung Chi-wai, associate director at Prudential Brokerage in Hong Kong, said of the first day's trading. "The main reason is not ZhongAn displaying attractive quality, but the three 'horses' backing it," he said, referring to the founders' surnames, "Ma," which translates as "horse." 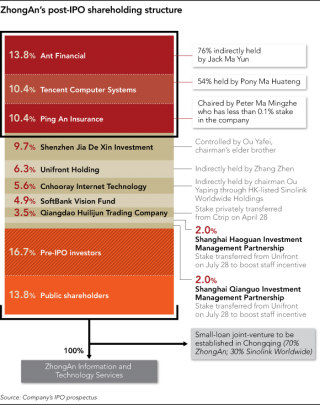 "Freight policies are useful when shopping at unfamiliar stores, as you can't tell whether they are selling you substandard products," said 27-year-old Luo Lu of Shenzhen, an avid shopper on Taobao, Alibaba's online e-commerce site. "There are also size and fitting issues when buying clothes online," she said.

Services offered by Alibaba and Tencent -- from social media, entertainment to payment -- are almost inextricable from the everyday life of modern Chinese. Embedded in their ecosystems -- as well as other digital platforms including those operated by ride-hailing operator Didi Chuxing, wireless carrier China Telecom, online travel platform Ctrip and smartphone maker Xiaomi -- ZhongAn could tap into a wealth of alternative data that drives product innovations.

One achievement of ZhongAn, as many analysts point out, is its ability to pioneer a wide range of quirky insurance products that capture previously unmet, or non-existing, demand. 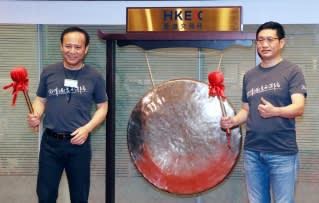 Yaping Ou, left, chairman of the board and Executive Director for ZhongAn Online P & C Insurance rings a ceremonial gong to mark the company's debut on the Hong Kong Stock Exchange in Hong Kong on 28.Sep. (Photo by Shinya Sawai)

"For customers, ZhongAn provides personalized product offerings, customized dynamic pricing and automated services," Leon Qi, an analyst at Daiwa Capital Markets, wrote in a July 3 note. "For its ecosystem partners, ZhongAn offers an additional level of protection to consumers during the purchasing process, improves the customer experience by lowering the frequency of disputes, and hence creates a virtuous cycle with its ecosystem partners," he said, referring to digital platforms that offer the company's policies.

That business model relies heavily on innovation driven by big data and currently forms the smallest part of China's insurance technology, or insurtech -- a market that is expected to grow from 363 billion yuan in 2016 to 1.4 trillion yuan in 2021, while the country's entire insurance market will be valued at 4.9 trillion yuan, according to financial-services consulting firm Oliver Wyman. 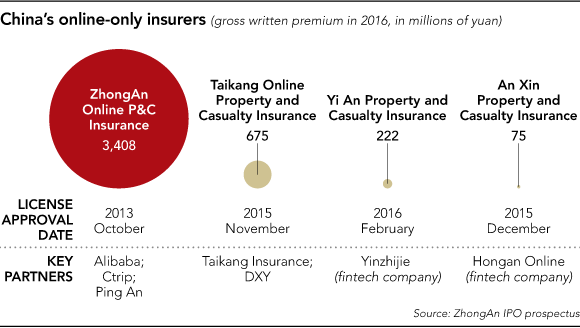 But the size of this innovation segment, versus pure online distribution and the use of technology to better price insurance policies, will grow by an annual compound rate of 62% in five years to make up 16% of China's insurtech market and 5% of the entire insurance market, compared with a current 5% and 0.5%, respectively.

ZhongAn, which obtained a special online insurance license ahead of its rivals, had a 0.9% share of China's insurtech market as of 2016, according to its IPO prospectus.

Cliff Sheng, head of financial services for Greater China at Oliver Wyman, said China maintains a rather "encouraging" regulatory framework for disruptive players because their offerings dovetail with the national drive for financial inclusion. "They serve the mass population," Sheng said, noting that many of these products came into the market through a registration process, rather than formal regulatory approval.

The power of the "three Mas" was on full display while ZhongAn marketed its IPO. Its shares were reportedly oversubscribed more than 400 times, reflecting extremely high demand, with retail investors taking out margin loans of over HK$80 billion to join the crowded field. The frenzy not only triggered a clawback feature that allowed the amount of retail investors' shares to expand up to 20%, but it also meant that ZhongAn's 199.3 million shares priced at the top end of their range, at HK$59.70.

ZhongAn counted on just one cornerstone investor -- Japan's Softbank Group -- a rarity in Hong Kong's IPOs over the past few years, which had seen many of its major offerings getting completed on strong reliance on Chinese state-backed cornerstone investors. The strong demand came despite the company's 79% decline in net profit to 9.37 million yuan ($1.41 million) for the full-year ended 2016, and a net loss of 202.1 million yuan for the three months ended in March. Without gains from investment, the company has yet to turn a profit. Losses from its core business -- underwriting -- swelled one-and-a-half times from 2014 to 2016, and widened to 205.5 million yuan in this year's first quarter.

Even the company's senior management is unable to pinpoint when the company will record a profit, but investors do not seem overly concerned.

"Although [ZhongAn] has yet to generate profits, it is riding on some awesome concepts," said Edmond Hui Yik-bun, CEO of Bright Smart Securities, which extended the largest amount of margin financing for the IPO among all Hong Kong brokers at a record HK$21 billion. Hui said the bet was made on ZhongAn's ability to radically transform consumer behaviors and lifestyle in China, making note of WeChat and Alipay, the two homegrown mobile applications that have morphed into the country's payment infrastructure and is helping to push China toward a cash-less society.

Analysts generally have no consensus on how to value ZhongAn, which challenges conventional metrics by straddling both insurance and technology. Nor is there a similar rival to act as a benchmark. ZhongAn displayed its products and concepts at an exhibition in Hangzhou, eastern China in October 2015.   © Reuters

Compared with other property and casualty insurers, which are trading at around 1.1 times to book, or net asset, value, on average, ZhongAn looks expensive with a valuation of four to five times, according to Ke Yan, an analyst at Smartkarma, a Singapore-based online-investment research company.

Compared with ZhongAn's high-profile major shareholders Tencent and Alibaba, whose shares trade at roughly 35 times to 2018 projected earnings, ZhongAn's valuation of 148 times appears lofty. Its valuation is more in line with other "software as a service" or "platform as a service" companies that are trading at around seven to eight times price-to-sales ratio. "It is not going to be a value-investor's pick, but rather for people betting the longer term leadership as an insurtech company," Ke said. Another concern for investors is ZhongAn's dependency on its platform partners, from which it derives 75% of its gross written premiums -- the income from underwriting insurance policies for a given period. Despite diversifying, its total fee to maintain these alliances rose to 43.6% of its premium income for the three months ended in March, compared with 39% a year earlier.

"ZhongAn will need to ensure it doesn't become over-reliant on its most powerful partners," said Matthew Wong, lead analyst at New York-based tech research firm CB Insights. That will be especially important because some of its key partners are also joining the fray. Tencent, for example, is teaming with Taiwan's Fubon Financial Holding to sell insurance on its WeChat messaging service in mainland China. Alibaba, too, has invested in other insurance companies.

"It's true that some [of our] business lines are very similar, but we are all positioned differently," Chen Jin, ZhongAn's chief executive, said at a press conference on Sept. 21, referring to the company's three major shareholders. "Tencent and Alibaba attach more emphasis to 'open platforms,' while ZhongAn focuses more on growing our roots and development in the space of insurance technology," Chen said, adding that the process would help cement ZhongAn's relationship with its big backers.

This venture is managed through a wholly owned subsidiary, called ZhongAn Technology, and established in July 2016 to drive advancements in artificial intelligence, blockchain technology, cloud computing and data-driven marketing. Research and development represented 8.9% of ZhongAn's gross written premiums as of March, up from 2.8% in 2014.

"I believe ZhongAn Technology is the real golden goose," Paul Schulte, an analyst and founder of Schulte Research, wrote in a paper dated Sept. 11. "ZhongAn Insurance was just a warm up. Look at the pattern of Jack Ma's build-out and acquisitions. He built Alipay, and now that serves as the software platform of Ant. He bought Hundsun and that was the hardware platform of the banks," said Schulte, who believes that ZhongAn will need to invest more in hiring world-class data scientists going forward.

Yet in its IPO prospectus, ZhongAn said it currently intends to place the net proceeds from the IPO "into short-term interest-bearing deposits and/or money market instruments" for a stronger capital base.

Beyond technological venture, ZhongAn is setting up a small-loan company in Chongqing. The company will be a joint venture with Sinolink Worldwide Holdings, a Hong Kong-listed real-estate company founded by the current chairman of ZhongAn, Ou Yaping, in 1992. Ou now has a 45% stake in Sinolink as a non-executive director.

Speaking at a forum on Sept. 26, Cheah Cheng-hye, chairman of Hong Kong-based asset manager Value Partners Group, said ZhongAn exemplified the current anomaly in the market where asset prices are puffed up by low-cost funding.

"The world has too much savings. There's a huge surplus capital all over the world and insufficient good investment opportunity because of massively stalled global growth, especially since 2008," Cheah said. "This IPO will be many, many times oversubscribed despite, in fact, not being a very profitable company."