Due to high leverage, some investors may see profit only if stock rises 24%

HONG KONG -- Hundreds of thousands of retail investors hoping to buy shares in Ant Group will be counting on gains of at least 11% in the initial days of trading to cover the upfront costs of trying to be part of the world's largest initial public offering.

Ant's IPO, which could raise as much as $39.6 billion, has stoked a frenzy, with mom-and-pop investors alone putting in bids worth $3 trillion in Hong Kong and Shanghai ahead of its trading debut Thursday. While most investors will likely hold onto their shares, many retail investors borrowed heavily to invest in Ant in anticipation of an immediate listing windfall.

But investors looking to cash out quickly face some uncertainties, especially after China's financial regulators summoned top Ant executives and controlling shareholder Jack Ma to discuss the company's rapid expansion, in a public signal of official displeasure. Markets are also expected to be volatile as votes in the U.S. presidential race are tallied.

"For those just playing the IPO, the risks are always high and can be influenced by other unrelated events on the debut day," said Andrew Sullivan, a director at brokerage Pearl Bridge Partners in Hong Kong. "In Ant's case, being the record-breaker it is, the risks may be reduced, but they are always present. For margin players, they are only multiplied."

Retail investors in Hong Kong borrow as much as they can from their brokers to apply for as many shares as possible in an IPO to maximize their chances of winning an allocation. 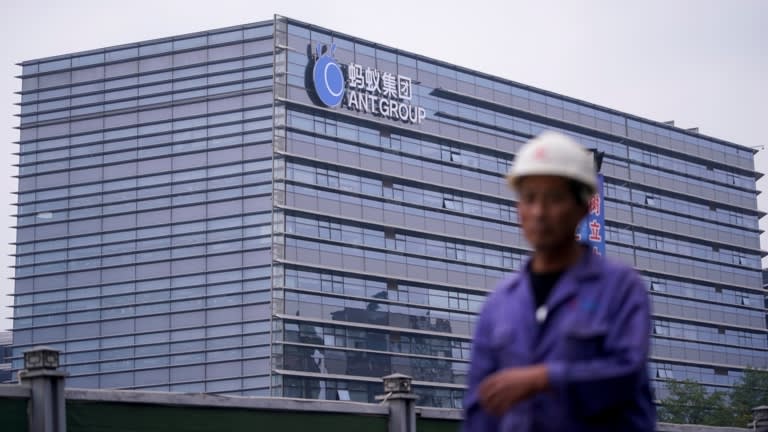 Typically, just 10% of their bid is cash, with the rest financed as a margin loan. Some brokers, such as Bright Smart Securities & Commodities, went so far as offering to fund 95% of Ant orders.

Interest on these five- to seven-day margin loans is generally in the range of a 2% to 3.5% annual rate, though this time brokers went below 1% for their best customers.

While interest charges are not high, the catch comes in the size of the bids and the allotments. Ant will reveal the results of its allotment for Hong Kong on Wednesday. Last week, it said Shanghai retail investors had been allocated 0.127 shares for every 100 they ordered.

In Hong Kong, about 1.55 million investors, a fifth of the city's population, bid for a total of 16.25 billion shares.

The need for returns climbs as bid sizes rise. A person who bid for 200,000 shares and was allocated 600 would need a first-day pop of about 14% to break-even while one who applied for 10 million shares and received 17,000 shares, would need the stock to gain 24%, based on a calculations by Nikkei Asia.

The calculation factors in a broker commission fee of 1% as well as handling, transaction and trading fees. Such calculations assumes the allocation would diminish proportionately as the number of shares for which an investor bid rose, as is the norm with IPOs in Hong Kong.

Investors surveyed unofficially by two banks involved in the IPO expect to see the stock rise 10% to 30% the first day, according to two people familiar with the matter.

Stock moves on Shanghai's STAR Market and the Hong Kong Stock Exchange are not limited during the first day of trading, and high-profile IPOs that have drawn heavy orders typically surge. Shares of Chinese bottled-water maker Nongfu Spring surged as much as 85% in Hong Kong on their debut in September and closed the first day up 54% in Hong Kong, for example.

Still, as investors line up to get a piece of Ant's IPO, analysts and bankers are wary of looming uncertainties casting a shadow over the debut of Ant, which will be valued at close to $320 billion -- more than JPMorgan Chase and the largest Chinese lenders.

While no specific details of Monday's discussions between regulators and the Ant team have emerged, the company said in a statement that it would "implement the meeting opinions in depth."

Draft microlending rules, published separately on Monday by the People's Bank of China and the China Banking and Insurance Regulatory Commission, set a 5 billion yuan ($746.8 million) registered capital threshold for microlenders that offer loans online across different regions of the country.

The draft rules and the meeting with Ant's executives "indicates that regulators are taking serious steps against online microlending companies and fintech companies including Ant," Jefferies analysts led by Shujin Chen said in an investors' note. The analysts said they "expect slower growth in online microloans and lower profitability for loan facilitation business."

Ant was the largest online consumer credit and small-business loan originator in China as of June 30, with outstanding balances of 1.7 trillion yuan and 422 billion yuan, respectively, according to consulting firm Oliver Wyman.

Revenue from the online consumer and small-company loan business made up nearly 40% of Ant's total revenues in the first six months of this year, compared with just a quarter share in 2017, according to the company's prospectus.

Ant originates loans, 98% of which had been underwritten by roughly 100 partner financial institutions as of the end of June, with Ant collecting service fees. The business is one of the key pillars of the company's valuation, according to analysts.