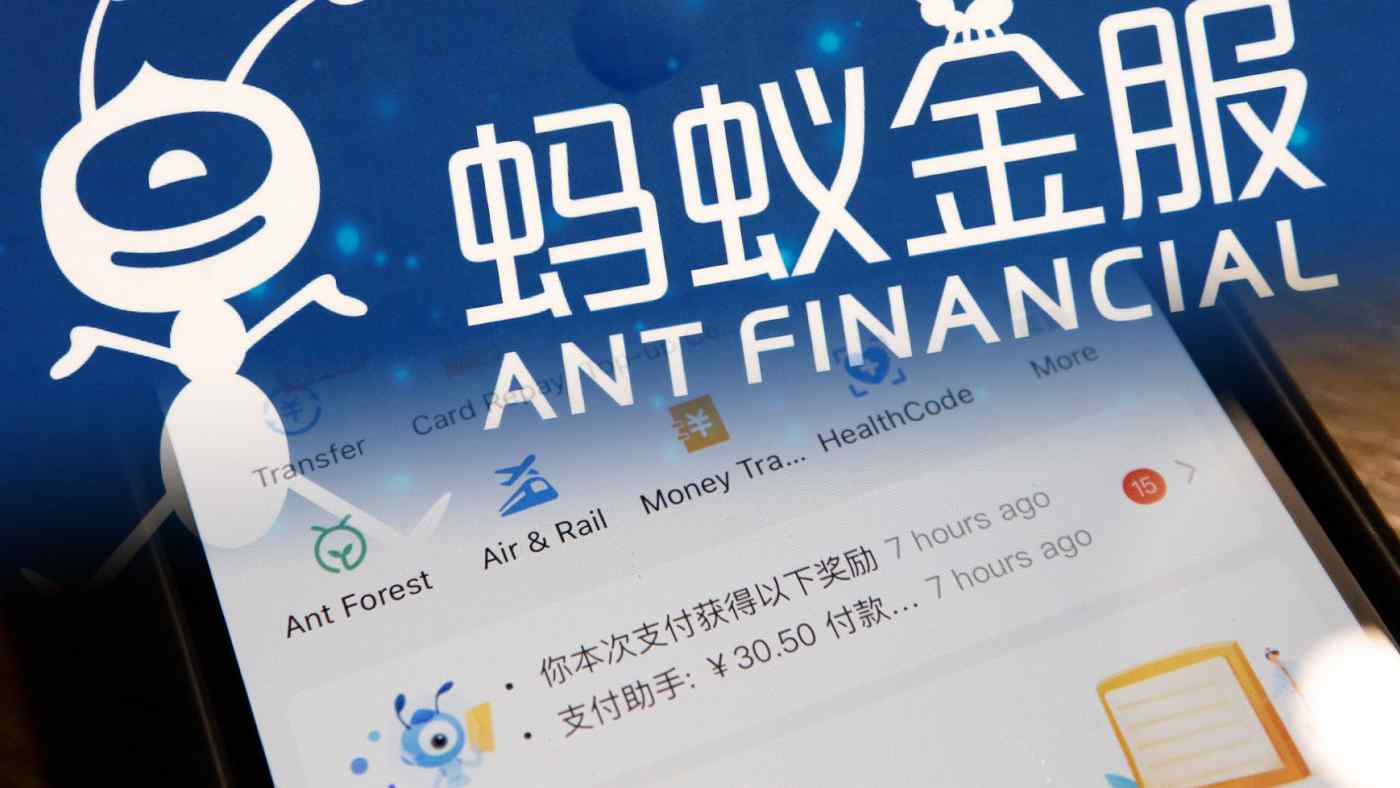 HONG KONG -- Ant Group, the fintech affiliate of Chinese ecommerce titan Alibaba Group Holding, said on Monday that it will seek an initial public offering in Shanghai and Hong Kong. The Hangzhou-based fintech firm, valued at least $200 billion, aims to sell 10% of its shares through the dual listing, the Nikkei Asian Review has learned.

Here are five things to know about the company ahead of its planned IPO:

Who is Ant and what does it do?

Ant Group -- known until this year as Ant Financial -- is China's largest fintech company by market share. Established in its current form in 2014, Ant made a name for itself with its hugely popular mobile wallet, Alipay, which has roughly 900 million users in the country, or nearly 70% of the total Chinese population.

In addition to facilitating digital payments, Ant also offers digital financial services to Chinese families and businesses. In fact, sales of its wealth management products, microloans and insurance accounted for more than half of the company's revenue in the 12 months through March 31, according to Alibaba's latest earnings report.

As a private company, Ant does not disclose its finances, but a person familiar with the matter told Nikkei that the company generated about $2 billion in profit in the October-December quarter.

What is its connection to Alibaba and Jack Ma?

Ant was spun out of Alibaba in 2011 when the e-commerce giant separated its Alipay payments platform from the rest of the company to comply with Chinese regulations. It was rebranded as Ant Financial in 2014 and renamed Ant Group in June.

Last year, Alibaba gave up its rights to 37.5% of Ant's pretax profits in exchange for a 33% stake, which has simplified the fintech company's ownership structure and paved the way for its listing.

Alibaba founder Jack Ma retains a 50% stake in Ant through his control of two investment partnerships.

What is its growth strategy?

Alipay long ago branched out beyond fintech services in its quest to become an "all-in-one" app, allowing users to do everything from hail a ride to shop and buy movie tickets online. In recent months, the company has also ramped up its efforts to help digitize Chinese brick-and-mortar merchants.

Roughly 1.7 million Chinese merchants and institutes have already used Alipay to begin operating digitally, according to Ant, and the company has pledged to help 40 million enterprises move their business online by 2023. Bringing in more offline merchants should help keep users locked into Ant's payment ecosystem even as competition rises.

Already a household name in China, Ant is seeking to expand its global reach. In Indonesia, Ant has backedfintech startup Dana to provide cashless payments. In India, it has acquired a stake in One97 Communications, which runs viral local e-wallet Paytm, and in Thailand, the company has invested in Ascend Money, a fintech unit of Charoen Pokphand, the Thai conglomerate that operates the 7-Eleven convenience store chain.

Who are Ant's rivals?

The list is long. At the top are Shenzhen-based entertainment heavyweight Tencent Holdings, Chinese insurance conglomerate Ping An, and the country's second-largest ecommerce operator JD.com, as well as high-flying fintech startups such as Yeepay.

Competition is understandably fierce for China's digital payment market, which logged more than 53.4 trillion yuan ($7.64 trillion) in transactions in the first quarter of this year, according to market research firm Analysys. 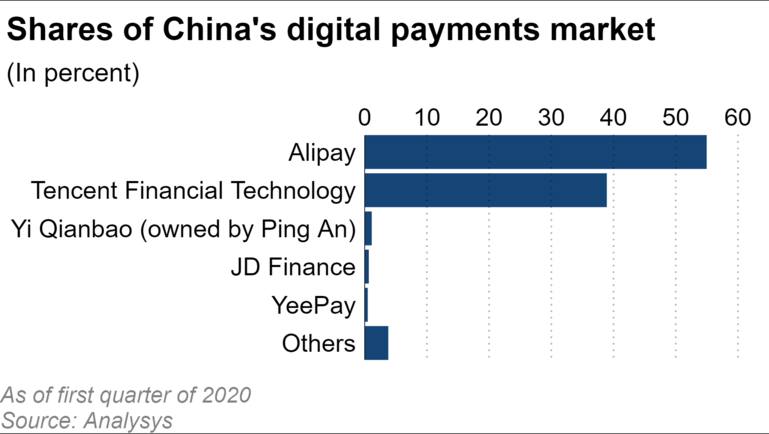 So far, Ant's Alipay remains the undisputed leader, with a market share of 54.9% in the first quarter, Analysys estimated. But that is a decrease from the first quarter of 2016, when Alipay controlled 63.4% of the Chinese digital payment market. Tencent's financial arm, on the other hand, raised its market share from 23% to 38.9% during the same period.

What are its regulatory obstacles?

Chinese banks, which view Ant and other fintech companies as a threat, have long complained that digital financial service providers operate like conventional banks but are not regulated as banks. Ant has responded by labeling itself as a "techfin," rather than a fintech, company to emphasize its focus on technology.

As part of efforts to mitigate financial risks, China's central bank said in 2017 that third-party payment operators like Alipay must transfer any customer funds they held into a dedicated custodial account at a commercial bank, but without receiving any interest from that bank.

This was a huge blow for Ant and Tencent, which previously were allowed to invest the hundreds of billions of yuan that was left sitting in digital wallets when customers received payments but did not immediately use the money.

Tighter government scrutiny is on the horizon after the central bank said last year that it will "strengthen supervision" on operations set up by non-financial institutes.

Against this backdrop, Ant's plan to go public could be intended as a step toward addressing regulators' concerns.

"Becoming a public company will enhance transparency to our stakeholders," Eric Jing, executive chairman of the company, said in the statement on Monday.