Asia has all the ingredients for a fintech revolution 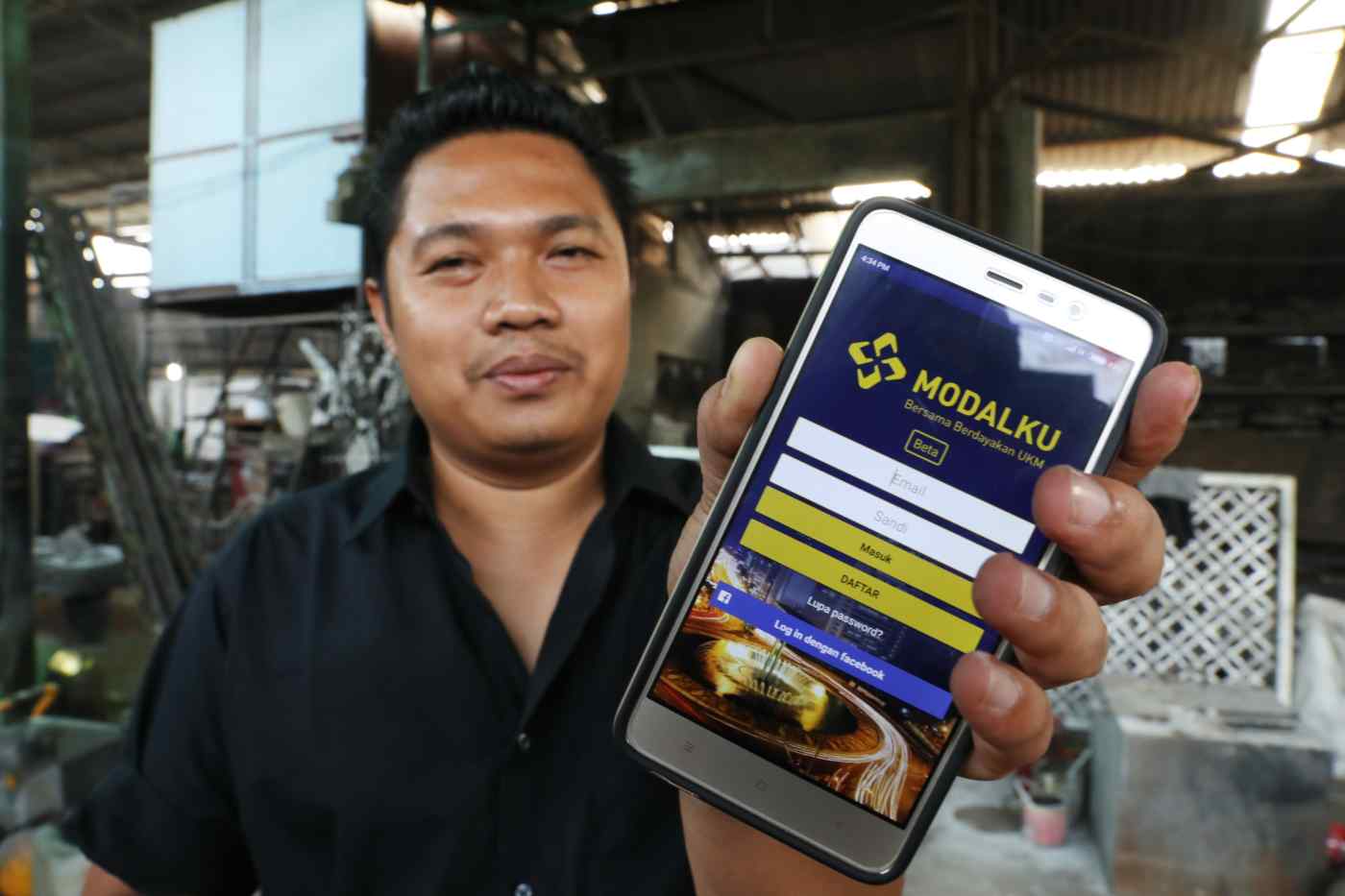 BANGKOK -- Ron Hose was leading a successful life as an entrepreneur-turned-venture capitalist in Palo Alto, California, in 2012 when he had an epiphany: The place for innovation was not in the heart of Silicon Valley, but in Asia. The American computer scientist was thinking about how to make "positive social impacts" through founding and supporting startups. At the same time, he was shocked to realize how many people in emerging economies did not even have a bank account, let alone credit cards. His attention turned to Southeast Asia, where robust economic growth was leaving many ordinary people behind in terms of financial inclusion.

To Hose, it seemed obvious that new, technology-based services could help solve that problem. He moved to Manila in spring 2013 to take a closer look, and in February 2014, he co-founded Coins.ph, a bitcoin exchange. Then, in June 2014, he launched the services he had been wanting to provide: digital payment and international remittance using cutting-edge technology known as blockchains.

Coins.ph provides payment services in bitcoins and Philippine pesos, as well as international remittances in either local currencies or bitcoins using bitcoins as the transfer medium, thus skipping the high exchange rate margins and fees charged by banks and other remittance service providers.

Coins.ph has partnered with convenience store chain Seven-Eleven, Philippine lender BDO Unibank and other banks, and chains of licensed local payment shops so that users can visit the nearest branch or outlet to make payments, transfer money or withdraw funds from their accounts. A payment shop run by Bernardino Dominguez near slums on the northern outskirts of Manila is one of those local outlets. The 3-sq.-meter space is equipped with a PC, printer and mobile phone and handles 1.5 million pesos ($32,000) in transactions every month, ranging from payments of utility bills and government fees to money transfers, via services provided by nontraditional players like Coins.ph.

"Customers come to my place to pay their bills rather than going all the way to those companies' dedicated payment centers," Bernardino said in an interview at his shop. Bernardino earns around 30,000-40,000 pesos a month in fees and commissions from Coins.ph and other e-payment providers, well above Manila's around 15,000 peso minimum wage and not bad for somebody who did not finish college.

"The low banking penetration and the high penetration of mobile communications mean both unmet demand and technological readiness are there," Hose said. "I believe Southeast Asia will leapfrog the U.S. in terms of fintech utilization."

Hose's case is just the tip of the iceberg when it comes to the global interest in Asia's fintech industry. 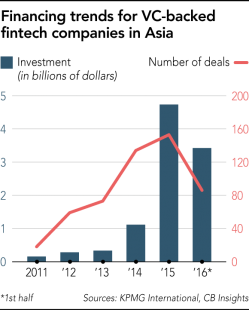 In 2015, equity investments in Asian venture capital-backed fintech startups more than quadrupled from $1.1 billion in 2014 to $4.7 billion, surpassing Europe's $1.5 billion and approaching North America's $8.1 billion, according to a survey by KPMG International and CB Insights. In the first half of this year, fintech investments in Asia reached $3.42 billion, surpassing North America's $3.1 billion and Europe's $672 million.

Fintech startups widely vary in terms of their business models and underlying technologies. The largest portion of VC investments is going into lending services, such as peer-to-peer, or P2P, lending, while the second-largest is going into payment services. Other categories include money transfer services, insurance-related services and tech developers, such as those working on cryptocurrency technologies or artificial intelligence systems for risk assessment.

Hartono Suwongso, 33, is one of the many small-business owners in Indonesia taking advantage of the emergence of P2P lenders. Only 11% of adults in the country have access to business-purpose loans by conventional financial institutions.

Suwongso, who owns a metal fence workshop in West Jakarta, had been wanting to increase his operating funds so that he could expand raw material inventory and shorten order-to-delivery lead time. But banks rejected his loan applications because of a lack of sufficient collateral. Then, this spring, he discovered P2P loan provider Modalku, which does not require collateral.

Modalku, founded in January in Jakarta, calculates the creditworthiness of small and midsize businesses by analyzing monthly financial records and the owners' psychological profile. Reynold Wijaya, co-founder and chief executive, says the company "figures out not only the borrowers' ability to repay debt but also their willingness to repay" by utilizing risk-assessment and psychometric technologies backed up by artificial intelligence.

Based on the results of those analyses, Modalku assigns businesses an overall rating, such as AA or BB, and posts the results of approved borrowers on its website. The interest rate for each rating notch is fixed so that riskier loans yield higher returns for lenders. Investors look at this information and, if they decide a borrower is trustworthy, pledge a small amount of money toward that particular loan. When a sufficient amount of money has been promised by several lenders, the loan is finalized and executed.

Michael Hadipranoto, 34, runs a midsize logistics company and has been looking for personal investment instruments with decent yields. Having tried stocks, government bonds and even financial derivative products, he said he has found that P2P loans vetted by Modalku tend to yield decent interest with relatively low risk. In Indonesia, one-year interest rates are typically in the 5-6.5% range. For Modalku's loans, the annual rates are in the double digits.

Modalku began commercial operations in April and has facilitated loans to more than 50 companies. It has received funding from Sequoia Capital, one of the world's most prestigious venture capital firms, and has partnered with Bank Sinarmas of Indonesia for custody services and with Indonesia's leading e-commerce provider Tokopedia for customer referrals.

China accounts for a large chunk of the investment being made in Asian fintech startups. Of the world's 30 largest fintech-related venture capital funding deals during the first half of 2016, more than half the money went to Chinese companies, according to KPMG and CB Insights. 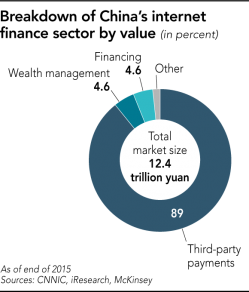 Annual revenue of China's internet financial companies reached 12.4 trillion yuan ($1.8 trillion) for 2015, according to a report released in July by McKinsey. Bill payment and other online settlement services accounted for some 90% of the market, the report said. The "wealth management" sector, which includes fund sales, and the "financing" sector, which includes peer-to-peer lending and small and micro loans, followed at 4.6% each. These sectors are largely dominated by big internet companies like Alibaba Group Holding and Tencent Holdings.

Alipay, a payment platform run by Ant Financial Services Group, which belongs to Alibaba Group, has captured an overwhelming 72% share of the mobile payment market, which is estimated to have reached 9.3 trillion yuan ($1.4 trillion) with more than 400 million users. Tencent's WeChat Payment commands the second-largest share of 17%.

In India, another titan in terms of population, more than 100 million people use mobile and digital wallets for making payments, mostly using platforms by startups such as Paytm, MobiKwik, Freecharge and Citrus Pay. A National Association of Software and Services Companies study forecasts that India's fintech business market will double from $1.2 billion in 2015 to $2.4 billion in 2019.

Among the technologies powering the fintech revolution, blockchains and other types of so-called distributed ledger technologies are attracting perhaps the most attention, not only among investors, but also among economists, technologists, commercial bankers and even central bankers. 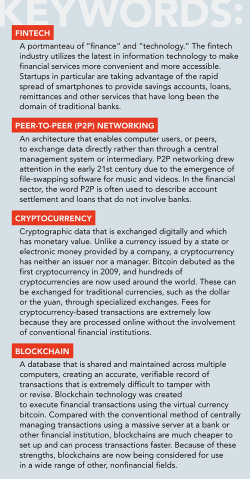 Blockchains were originally developed to enable bitcoin to function as a secure and stable currency by recording all instances of bitcoin creation and usage in a single ledger, or database, shared by all users. Other types of distributed ledgers have been derived from the blockchain concept.

Because a single ledger is shared by all users simultaneously, it is extremely difficult for anyone to modify information once it has been recorded in a blockchain. And because transactions are completed instantly, there is zero possibility of them being tampered with as they are being processed.

These aspects of the technology have led some to postulate that it could be used not only for carrying out monetary transactions but for executing any kind of multilateral commitment or contract automatically. For example, using a shared ledger and AI technology, a microcomputer at a customer's home could communicate with another located at a merchant's place of business to automatically complete transactions, such as a recurring order for drinking-water refills.

Almost all the major central banks have started experimenting with distributed ledger technology for digital currency issuance and settlements with commercial banks. Many money center banks are also testing blockchain and similar technologies for interbank and bank-to-customer transactions. Nonbank providers of remittance services, both startups like Coins.ph and established players like Western Union, are getting serious about these technologies.

This spring, Western Union poured money into an investment company specializing in digital currencies and distributed ledger technologies. The objective is to find good fund transfer technologies, according to a company executive quoted by Forbes.

Not everyone is convinced of the potential. Neal Cross, chief innovation officer at DBS, dismisses the notion of blockchains being the next big thing, calling it a "huge over-hype" and "just another piece of technology."

But who knows? With its huge demand for financial services outside conventional financial systems and institutions, Asia may find a way to outpace the U.S. and Europe and unleash the world-changing potential of blockchains and other new financial technologies.

Governments in emerging Asia are increasingly betting on the potential of fintech.

On Aug. 30, Indonesian President Joko Widodo addressed the government-sponsored Indonesia Fintech Festival and Conference, where he hailed digital technology as "a golden opportunity, especially for those who have not been reached by formal financial services." The president was flanked by the country's finance minister, central bank governor, communications and information minister and others.

The Chinese government, which is strengthening consumer protection against fraudulent lending, is also growing more active in testing distributed ledger technologies. Traditional banks, which have been subject to tight government control, are also trying to embrace innovation by experimenting with blockchain and other new technologies.

One thing is becoming clear: Fundamental changes in the way financial services are provided and received are already underway around the globe, and there is now no going back.