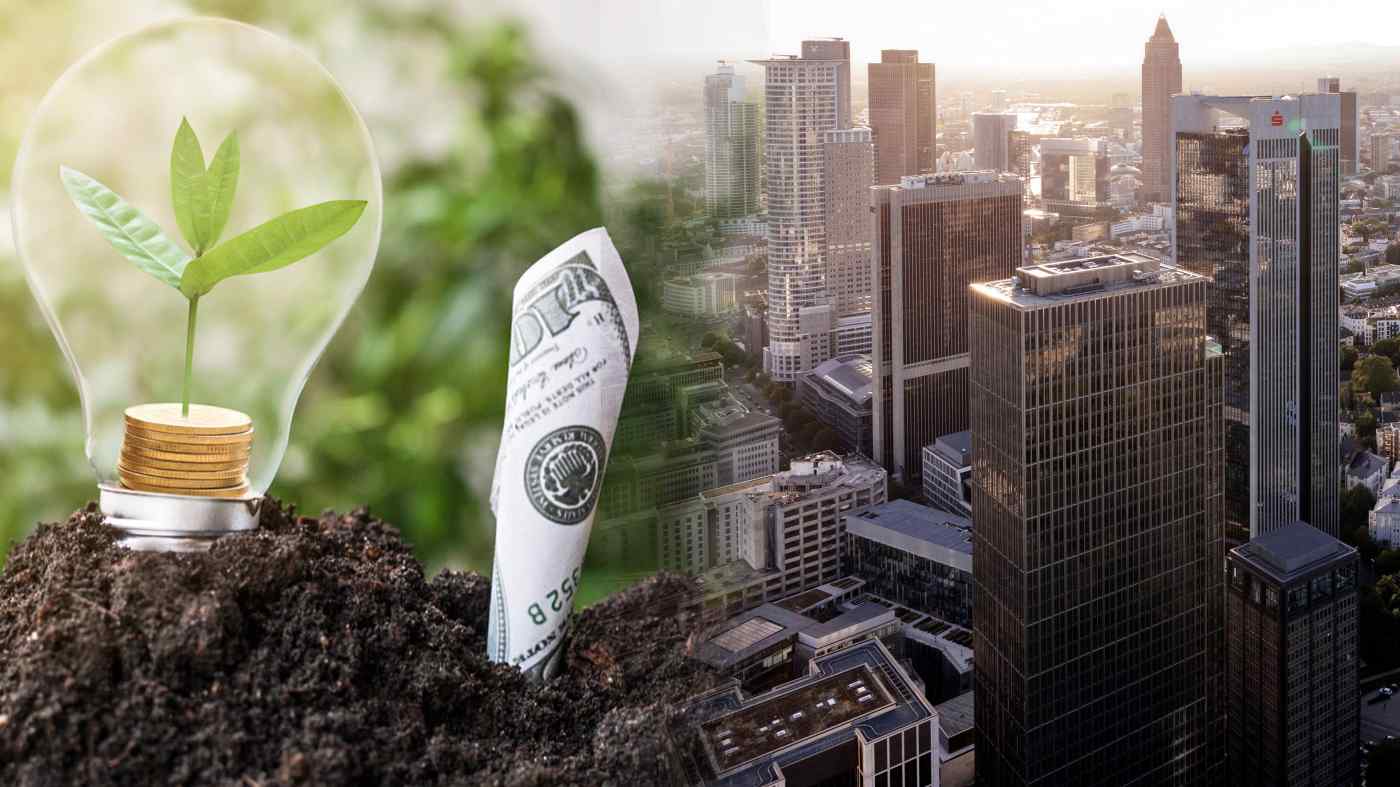 The sustainable finance market, which combines the amounts of ESG-related bonds issued and those of loans provided, has amounted to a total $1 trillion over the past five to six years. (Source photo by AP)
HIROKO MATSUMOTO, Nikkei staff writerSeptember 26, 2020 12:55 JST | Europe
CopyCopied

TOKYO -- Leading European banks are going on an offensive in the market for sustainable financing, particularly in Asia, seeking to boost business opportunities on the assumption that almost all financial assets will be linked to environmental, social and corporate government best practice in 10 years' time.

This quest is prompting banks in Europe, where regulation surrounding carbon emissions is increasingly strict, to educate their employees on ESG and proactively tap demand among companies planning to issue environmental bonds and other securities. As there are particular moves to capitalize on the rapid growth of Asian markets, a region where emissions are also still high, Japanese banks need to be poised to act accordingly.

The first ESG-liked foreign exchange deal was concluded in the Asian market in June, involving Olam International of Singapore and Germany's Deutsche Bank. The forward deal is designed to offer a favorable exchange rate between the Thai baht and the U.S. dollar to the major Singaporean agricultural trading house if it meets pre-defined ESG targets.

Deutsche Bank has worked out the exchange mechanism to help Olam meet its goal of achieving sustainable agriculture, said Kamran Khan, head of ESG for Asia-Pacific at the German bank.

Olam has environmentally-friendly agricultural practices that are also free from forced or child labor. After hearing that Olam was seeking business relations with a global bank, Deutsche Bank approached the Singapore trading house first. Olam International of Singapore has environmentally-friendly agricultural practices that are also free from forced or child labor.    © Reuters

Over the past six months, the German bank has successively adopted sustainable financing programs. In May this year, it set a goal of boosting sustainable financing and investments to 200 billion euros ($236.98 billion) by 2025 and issued green bonds in June for the first time to raise funds exclusively to finance environmental projects. Then, in July, it announced a decision to end its global business activities in the coal mining industry by 2025, while setting clear criteria for classifying ESG financing.

Christian Sewing, CEO of Deutsche Bank, set up a Sustainability Council in 2018 and said the following year that the bank would focus on sustainable financing.

Deutsche Bank is now ready to promote ESG-related financial services as a result of operational restructuring over the past two years, Khan said. Part of this restructuring included the creation in May of the post he has taken up.

The bank does not merely market ESG-linked financial products to corporate customers, but it also seeks out demand for them in cooperation with existing customers, according to Khan. It discusses sustainability strategies with corporate clients to find optimum ways of raising funds.

Khan's responsibilities cover all of the commercial, investment and private banking operations and asset management. The bank created the ESG post for the Asia-Pacific region alone in a bid to promote the establishment of its brand in a part of the world where ESG-related transactions are expected to increase, Khan said.

Earnings are picking up at Deutsche Bank as it climbed back into the black in the January-March period for the first time in four quarters and stayed there for April-June.

The bank is pushing ahead with sustainable financing because it anticipates that ESG will be taken into account as investment factors for 50% of assets under management in the world by the end of 2020, and 95% of them, at a value of $130 trillion, by 2030. Promotion of ESG-linked services across the board would become the core source of earnings on a medium- and long-term basis, bank officials said.

The issuance of ESG-linked bonds and loans totaled $365.3 billion as of Sept. 9, equal to 80% of the amount in 2019, according to research firm Refinitiv. The U.K.'s HSBC Holdings was the biggest underwriter, followed by J.P. Morgan and Citigroup of the U.S.

In an extensive survey conducted by HSBC in 2017 for the outlook through 2050, the bank noted a "shift to a low-carbon society" as a clear trend. Adopting a strategy to reinforce sustainable financing, HSBC said in November 2017 that it would provide $100 billion by 2025 to support programs to address climate change. It also said it had raised $52.4 billion by the end of 2019 in line with that strategy.

German consumer product maker Henkel issued the world's first plastic waste reduction bonds in July, with the help of HSBC. The company has set ambitious targets for sustainable packaging, saying that 100% of its packaging will be recyclable or reusable by 2025. The funds to be raised will be spent on these activities. 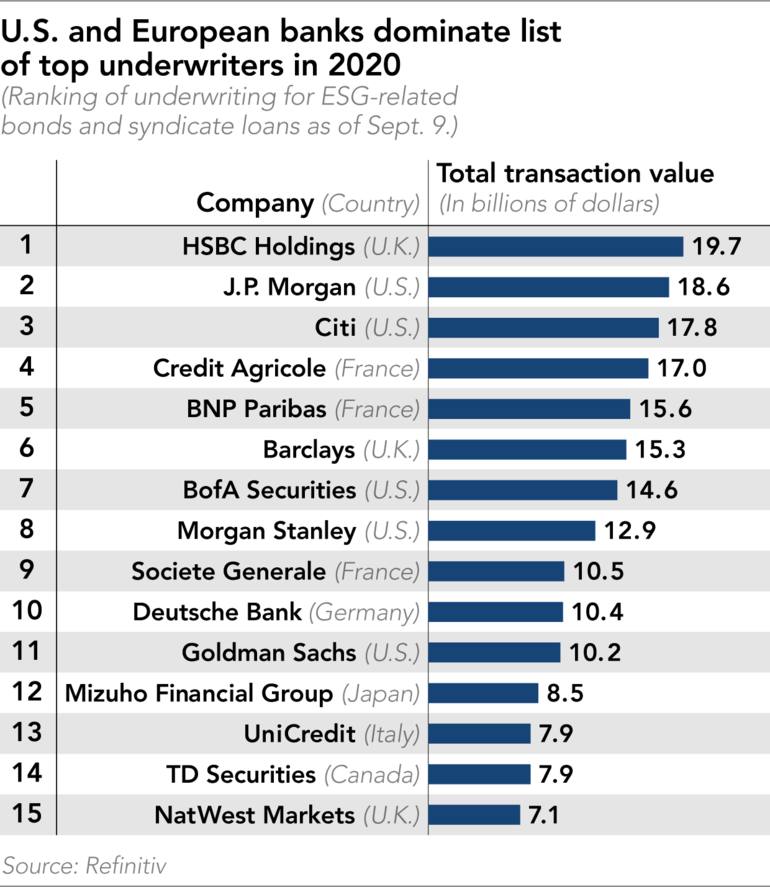 The bonds are privately placed with Japan's Dai-ichi Life Insurance and Dai-ichi Frontier Life Insurance. "[The bonds] take advantage of the strength of HSBC, which operates globally and has expertise on Asia and other emerging markets," said Daniel Klier, Global Head of Sustainable Finance at HSBC Group.

HSBC provides training programs for its employees through its HSBC University. The bank also established a unit specialized in providing ESG-related advice, strategy and fundraising ideas to companies aiming to cut carbon emissions close to zero.

European banks are leading sustainable finance, on the back of tightened regulation in the bloc. The European Union aims to cut carbon dioxide emissions in the region to nearly zero by 2050, introducing EU taxonomy, which classifies sustainable businesses. The EU also aims to give preferential treatment to banks in calculating credits to sustainable businesses for capital adequacy ratio regulations.

Monetary authorities and central banks are also calling on financial institutions to factor in risk associated with climate change. The Bank of England is expected to announce the result of its climate stress tests in 2021, while European Central Bank President Christine Lagarde says the bank is considering buying green bonds as part of its monetary policy.

European banks are under pressure to take swift action as policies change faster in the bloc than in other regions.

European banks other than Deutsche Bank and HSBC are also on the move. France's BNP Paribas, which says it is the first bank in the world to set a coal-exit date, leads the world in forming ESG-related syndicated loans.

When starting business with new clients, the bank suggests ESG-related loans, taking into account industry-based ESG tasks it has formulated. The bank sees future growth in "transition loans" for projects that help reduce carbon emissions, loans for companies without "green" resources and businesses that are highly effective in improving the environment.

In this, BNP Paribas and large corporate borrowers set ESG-related goals for small and midsize suppliers. If the suppliers achieve the goals, BNP Paribas will cut the interest rates on loans it has provided to the large companies.

Societe Generale, too, is aiming to be an energy transition bank, according to Koji Shimamoto, president of Societe Generale Securities Japan. The French megabank has strength in project financing for energy companies and focuses on financing renewable energy projects.

Of its loans for energy projects, those for coal fell from 20% in 2017 to 11% in 2019, while those for renewable energy rose from 35% to 51%. "There are big opportunities in the Asian market where energy infrastructure is insufficient and renewable energy is expected to grow," Shimamoto stressed.

Like Japan, Europe is in a prolonged low-interest environment as the ECB adopted a negative interest rate policy in 2014. Banks have been unable to earn enough profits by simple lending and have needed to find new growth fields to increase earnings. ESG will be a major part of this new activity.

The sustainable finance market, which combines the amounts of ESG-related bonds issued and those of loans provided, has amounted to a total $1 trillion over the past five to six years. European banks, which lead the way, are further accelerating their activities in the field as the market is expected to reach $2 trillion in 2021 or 2022, as BNP Paribas' Peiffer said.

These banks are expecting to find a great deal of business opportunities, including in developing renewable energy facilities, in Asia, where large amounts of carbon dioxide are emitted. The Asian market will likely be the main field of competition for winning customers.