BOJ grapples with the difficult side effects of easy money The Bank of Japan believes the adverse effects of monetary easing will be worth the price, but worries remain as the policy has yet to yield the promised results.
MOYURU BABA, Nikkei staff writerJuly 23, 2018 19:41 JST | Japan
CopyCopied

TOKYO -- The Bank of Japan is in a bind created by its prolonged ultra-easy monetary policy and will try to find a solution to the problem during a policy board meeting at the end of July.

Prices in Japan have yet to reach the 2% inflation rate targeted by the central bank's easing of credit. While the adverse effects of the policy on financial institutions cannot be ignored, the yen could appreciate if the BOJ adjusts interest rates, a move that would run counter to measures aimed at ending deflation. Many are worried about the seemingly endless monetary easing.

Yukitoshi Funo, a member of the BOJ's policy board, mentioned it at a news conference in June to describe the ramifications of the policy on the earnings of financial institutions. Another member, Takako Masai, also used the word when she referred to the government bond market at a July news conference.

The BOJ has maintained that monetary easing, while causing temporary side effects, achieves positive results over the long term. But five years after the policy began, the bank can no longer ignore the accumulated knock-on effects. 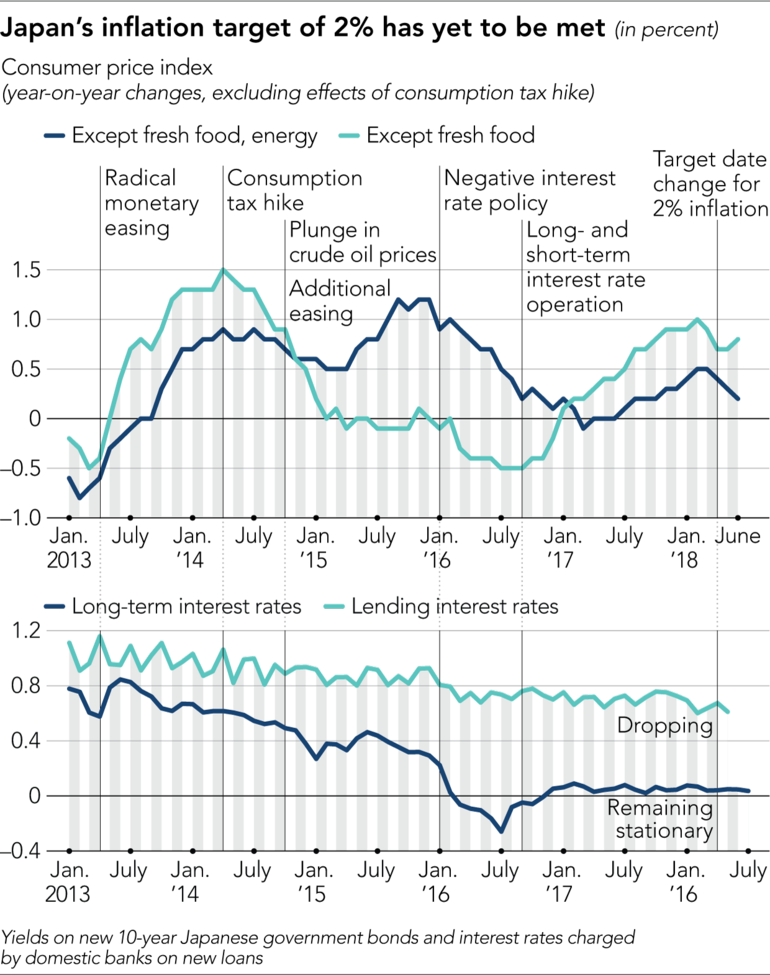 BOJ policymakers will discuss how to address the problems at their meeting from July 30 to July 31, after which they are expected to mention countermeasures. The officials are awaiting the return of BOJ Governor Haruhiko Kuroda from the recent Group of 20 finance leaders meeting in Argentina before making final adjustments to their plan to address the situation.

The BOJ can mitigate the fallout of monetary easing through a number of "flexible" approaches, such as raising its long-term interest rate target from around zero percent to improve the investment environment for financial institutions. The bank also needs to review the means of purchasing government bonds and exchange-traded funds.

But interest rates are likely to increase as rate adjustments take financial institutions' investments into account, possibly pushing the yen up.

Another potential problem lies with the BOJ attempting to settle at once all problems associated with its loose monetary policy. Specifically, prices could come under downward pressure because the yen will appreciate, causing import prices to fall. In this case, the BOJ may be forced to tighten credit and thus dampen economic activity, further hindering the goal of ending deflation. When the BOJ introduced negative interest rates two years ago, Kuroda said, "Monetary policy is not something we implement for financial institutions." He thus stressed that the central bank would prioritize raising prices and stimulating economic activity.

The BOJ is starting to change its stance because prices are not rising, forcing it to continue monetary easing despite the adverse consequences.

According to government data released on July 20, Japan's core consumer price index, excluding volatile fresh food and energy prices, rose a meager 0.2% in June from a year earlier, marking a slowdown in inflation for the third consecutive month. Pay hikes this spring have yet to contribute to price rises.

In a quarterly report, Outlook for Economic Activity and Prices, due to be released later this month, the BOJ will revise its April price growth projection for fiscal 2018 to around 1% from 1.3%, and for fiscal 2019 to 1.5% from 1.8%. With the "price stability target" of 2% still a distant goal, the BOJ -- unlike central banks in the U.S. and Europe -- is not in a position to exit its ultra-easy monetary policy.

If the BOJ resorts to additional credit easing in a desperate attempt to push up prices, the negative effects of the policy will grow. As its last option, the Bank will try to ease the negative outcomes on financial institutions while continuing with easy money as long as possible.

Although the BOJ will keep trying to hit its 2% inflation target, it will be difficult to attain without repercussions.