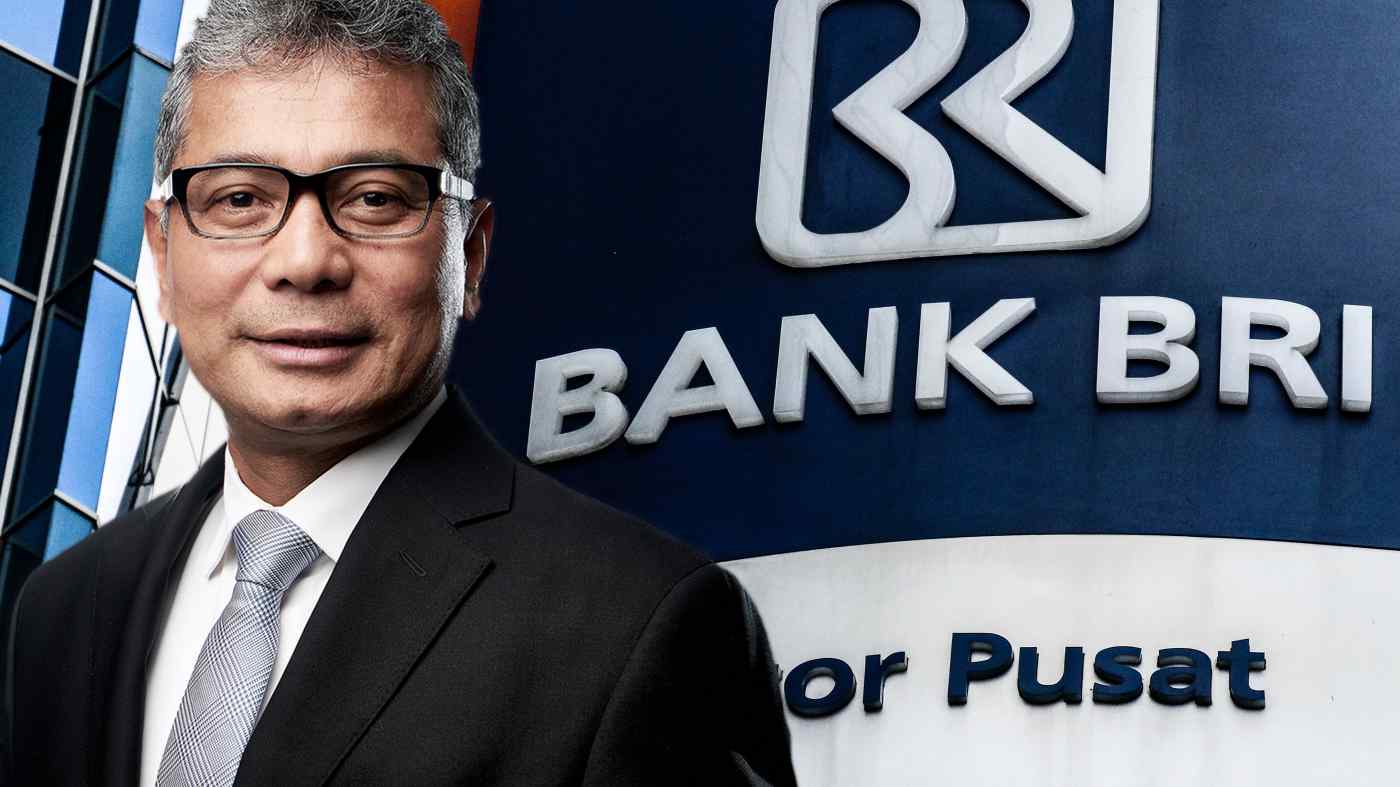 Sunarso, Bank Rakyat Indonesia's top executive, aims for it to stand out by diving deep into what is known as the "ultra-micro" lending sector. (Source photos by BRI and Nozomu Ogawa)
SHOTARO TANI, Nikkei staff writerApril 13, 2021 12:14 JST | Indonesia
CopyCopied

JAKARTA -- Bank Rakyat Indonesia, the country's largest lender by assets, was flying high prior to the coronavirus pandemic: Of the five largest banks by assets, BRI was the only one that had recorded 20 consecutive years of growth in annual net profit.

But as COVID-19 hit the sprawling archipelago and forced the government to restrict economic activity, BRI's streak came to an end. The state-owned bank was one of the worst affected, with its core customer base being the micro, small and medium enterprises that bore the brunt of the slowdown.

However, rather than walking away, BRI is ready to dive even deeper into the MSME space, where it sees growth opportunities in reaching out to even the tiniest businesses.

"BRI will become more distinctive by serving a smaller segment called 'ultra-micro,'" Sunarso, the bank's president director, told Nikkei Asia in a recent interview. According to the top executive, who like many Indonesians uses one name, there are 57 million ultra-micro businesses spread over the nation. But less than 20% have access to financing and end up being preyed upon by loan sharks or borrowing from close family and other relatives.

"BRI aims to reach this ultra-micro segment with smaller ticket sizes than what we offer to the micro segment," Sunarso said, referring to loan size. "This is below 10 million rupiah ($690) [per loan] and has a shorter tenor, as most of the ultra-micro businesses need loans on a daily basis," he said, adding it will become a new source of growth for the lender.

The bank has always catered to small businesses. It established a nationwide presence in the 1970s, when the government appointed it to channel small loans to rural rice farmers. Currently, nearly 65% of BRI's loans are to MSMEs, by far the largest ratio among Indonesia's big banks. Loans to the sector by fellow state-owned peers Mandiri and Bank Negara Indonesia account for just 20% and 26%, respectively, of their totals. The figure is 32% for Bank Central Asia, Indonesia's largest private lender.

Managed properly, small loans are lucrative. BRI was the most profitable bank in the country before the pandemic in 2019, racking up net profit of 34 trillion rupiah ($2.35 billion). But small loans are also riskier, especially when the economy takes a beating. Its net profit plunged 46% in 2020, the second-biggest fall among Indonesia's top banks. 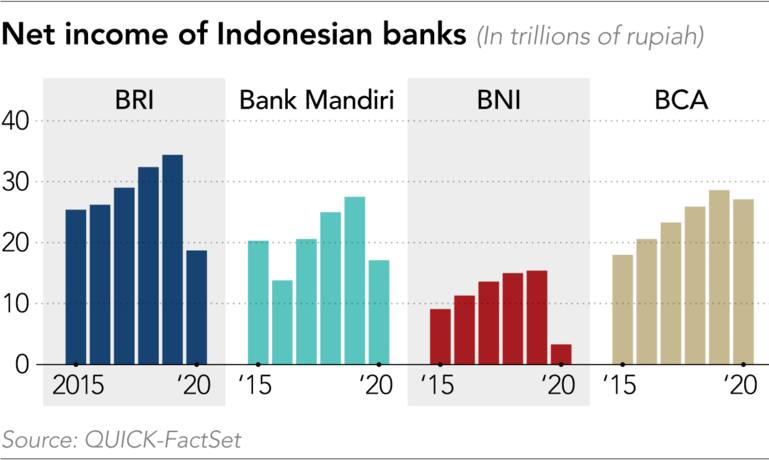 Sunarso believes the risks of going ultra-micro can be managed by a combination of technology and old-school foot soldiers in the form of the hundreds of thousands of on-the-ground personnel the bank can utilize.

For technology, the bank has built up a proprietary big-data platform that consolidates information from its group companies and partners to act as a central brain for determining things like credit risks and customer profiling. Sunarso said this allowed the bank to cut microfinancing loan processing time to just two minutes from two weeks.

The platform also supports the bank's 500,000 agents -- third parties such as small shops acting as pseudo-branches -- spread across the country's rural areas that provide the often-unbanked population with basic services. They operate in parts of the country that, Sunarso emphasized, are "hard to access for most banks, let alone by fintech companies" because of high operating costs.

"Along with the all-digital transformation, we cannot fully abandon the analog ways," he stressed. "BRI will codify villages in Indonesia and create the largest micro and ultra-micro database in Indonesia. This codification can establish a rural ecosystem and financial inclusion."

It's a risk worth taking for BRI, considering the market opportunities Indonesia's vast unbanked population offers. The world's fourth-most-populous country, with some 270 million people, is also the fourth-most-unbanked, according to the World Bank, with 95 million in that category in 2017.

The push for BRI to go deeper into the micro segment comes in part from the government. Erick Thohir, the minister of state-owned enterprises, noted in February last year the need for nationally controlled banks to be ready to compete with international financial institutions entering the country. And in November, he directed BRI to focus on ultra-micro and SMEs, Bank Mandiri on the corporate sector and BNI on supporting companies branching out overseas.

"BRI's strategy in expanding the ultra-micro segment can be a long-term positive catalyst, given that it has a competitive advantage and a proven track record in the MSME segment," said Victoria Venny, senior equity analyst at MNC Sekuritas. The formation of the holding company should "help BRI accommodate around 30 million MSMEs that have not been served by financial institutions, with a target of 15 million ultra-micro entrepreneurs by 2024," the analyst said.

Investors seem to be taking kindly to BRI's ultra-micro move. Its shares have risen approximately 1% this year, but that is better than those of other major lenders like Bank Mandiri, BNI and BCA that have all fallen. 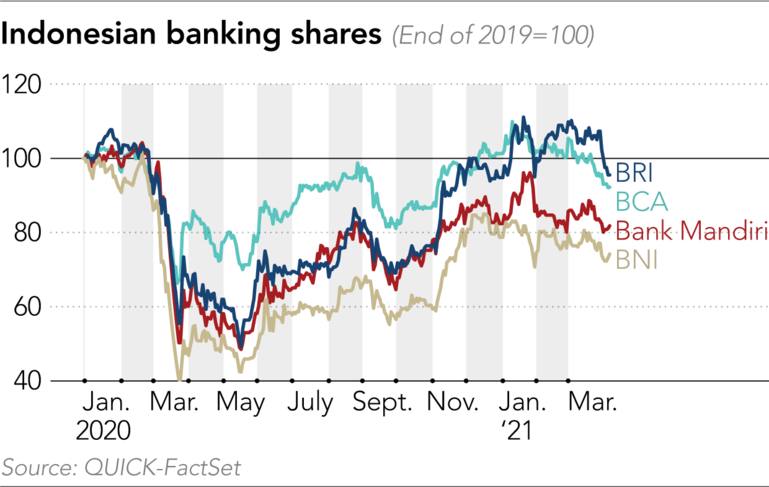 Sunarso approves of the government's urging on microlending, calling "distinctiveness" a "crucial factor" for coming out on top amid intensifying competition arising from its latest push to consolidate the fractured banking sector.

Currently, Indonesia has 109 commercial banks and 1,506 rural banks, and the government has long aimed to reduce the numbers. It has actively sought buyers both domestically and internationally for smaller banks -- Japan's Mitsubishi UFJ Financial Group and Sumitomo Mitsui Banking Corp. each took control of Bank Danamon and Bank Tabungan Pensiunan Nasional in 2019, respectively. Thailand's Bangkok Bank bought Bank Pertama in the same year. And BCA, also in 2019, acquired the small Bank Royal as well as Dutch lender Rabobank's local unit.

Tech companies are also getting in on the act with promises of a better banking experience through their digital-first approach.

Industry observers say tech platform companies pose a threat to BRI with their access to data inaccessible to banks, such as consumer spending information. "We can do credit scoring more efficiently because [we have] a lot of data," an executive at one of the platform companies previously told Nikkei.

BRI, for its part, is planning to turn BRI Agro, a subsidiary predominantly serving the agribusiness sector, into its own digital bank. BRI Agro is "building its ecosystem by establishing collaborations with P2P lending fintech companies, digital channels, and its vertical ecosystem," Sunarso said, referring to peer-to-peer lending. "This will help it reach more potential customers via [existing fintech] platforms."

But while preparing its own digital banking unit, Sunarso also believes that digitalizing Indonesia's banking sector needs to be grounded in collaboration, not competition, with the pandemic providing a testing ground.

The bank partnered with Gojek, its rival Grab and e-commerce platforms Shopee, owned by Sea, and Tokopedia in a government-sponsored, subsidized loan framework whereby users can apply for loans at BRI through those platforms. The digital companies "house more potential borrowers beyond our customers," Sunarso said.

"BRI believes [that] to achieve financial and economic inclusion, banks need to be open for collaboration and partnerships with fintech and digital platforms," he said. "With the current shifts in consumer behavior and industry trends post-pandemic ... it is inevitable for banks to coexist with digital channels and fintechs, including the market leaders Gojek, Grab and Shopee."