HONG KONG -- When a junior trader named Gary at a global bank in Hong Kong heard of preparations in early February to split up teams at his company, he brushed aside the idea, thinking they would remain well-rehearsed contingency plans to deal with the new coronavirus.

But the plans were put into action in the next few days as the significance of the coronavirus outbreak started to emerge.

Gary, who requested that his full name and the name of his company not be mentioned because he is not authorized to speak to the media, was among the group of staff assigned to log in from the bank's backup site in Kowloon across the harbor from his office in the city's Central business district.

Again, Gary thought the trek to an office -- about 30 minutes by taxi -- he had been to just twice in his more than three-year stint at the bank would be short-lived.

Yet more than a month later, Gary and his co-workers are still assigned to the Kowloon office, which he describes as "at the end of the world," a common refrain heard among the city's bankers. With the highly contagious virus now declared a global pandemic, Gary's working arrangement is set to continue for many months. People wearing protective masks in Hong Kong's Central business district. The Asian operations of major banks dug into their SARS playbooks and led the way by splitting up employees in early February.   © Reuters

"It was chaotic to start with," he said. "It was a perfect storm. We didn't take the virus seriously to start with and that reluctance -- along with the uneasiness -- in working away from your usual desk, lunch and coffee spots didn't help. It took time to settle in, as expected, but in terms of the trading infrastructure it was all there."

Gary and his team are not alone.

Lenders including HSBC Holdings, Citigroup, BNP Paribas, Societe Generale and JPMorgan have divided their sales teams and trading staff by sending them to backup locations in Hong Kong and Singapore to minimize disruptions, people briefed of the plans say.

The experience gained running the Asian operations amid a 24% jump in spot foreign-exchange volumes and a surge in derivatives trading is coming in handy as such splits are instituted across the world, these people say.

The Asian operations of banks, which were stung by an outbreak of the severe acute respiratory syndrome, or SARS, in 2003, dug into their playbooks from that period and led the way by splitting up employees in early February even as increasing volatility boosted volumes.

Back then, banks also operated in a split-operation mode or adopted a mobile workforce strategy. Regulators, too, have mandated that banks regularly test to ensure their backup facilities, networks and other infrastructure work seamlessly, and for nearly two decades the banks only had to test it. 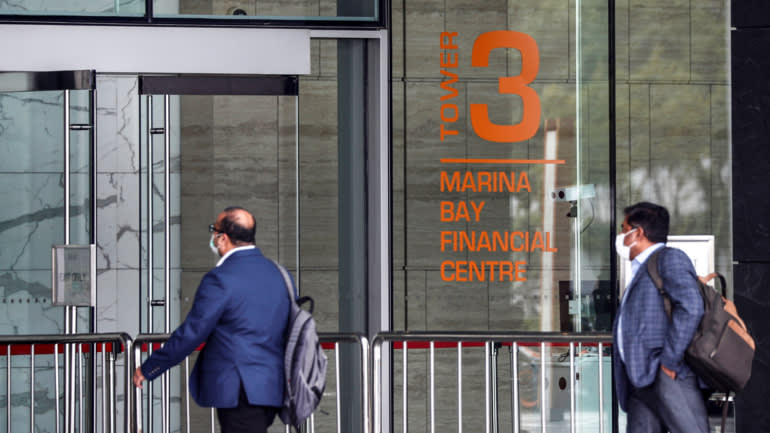 DBS Group Holdings evacuated 300 employees from its office in Tower 3 of Singapore's Marina Bay Financial Centre after an employee tested positive for the coronavirus in February.   © Reuters

Banks swung into action pretty much after the Lunar New Year holiday in late January as the coronavirus outbreak began spreading beyond China, where it originated. Business continuity plans that had previously only been tested were put to use with teams largely split into three groups: Team A would continue to work in the usual office, Team B in backup sites and Team C from home.

These changes were put into place even though confirmed coronavirus cases across companies in the region has been few.

Singapore-based DBS Group Holdings, Southeast Asia's largest bank, evacuated 300 employees from its head office in Tower 3 of Singapore's fashionable Marina Bay Financial Centre after an employee tested positive in February. A second DBS employee at another office in the city has also contracted the virus.

Oversea-Chinese Banking Corp., another Singapore-based bank, said earlier this month that one of its employees, who worked at the firm's OCBC Centre, had tested positive for the virus and that colleagues who were in close contact with the person were quarantined. The bank also gave the office a thorough cleaning.

In Hong Kong, French bank Natixis deep-cleaned and sanitized both floors of its corporate and investment-banking offices at the 118-story International Commerce Centre after a family member of an employee tested positive.

The Paris-based bank also has taken specific measures "that had been put in place for the most critical functions in terms of business continuity, certain of which teams are split and working on a rotating basis, either at Natixis facilities or from home," the bank said in a statement.

Spokespeople at HSBC, BNP Paribas, JPMorgan, Citigroup and Societe Generale say their companies are committed to sustaining full service and that they are taking all precautions to ensure the health and safety of employees and customers.

The banks also say they had well-practiced contingency measures, including homeworking and split-site arrangements.

A trader at a European bank says the teams are rotated between the usual trading floor and backup sites. He was also surprised when his employee card only gave him access to two floors in his workplace instead of the nine floors the bank occupies.

"It's not been the easiest of transition with a lot of changes in the way we work -- right from increased use of instant messengers to virtual meetings," the trader said. "While I haven't been to the backup sites often before, what this exercise shows us is the fact it can actually work very well."

The banks generally started by splitting teams over multiple floors and then activated their business continuity sites located largely in Kowloon and the outlying New Territories in Hong Kong, and Mapletree Business City in Singapore. Staff access to floors were restricted and cafeterias on certain floors were shut, while post-trading day gatherings were prohibited. 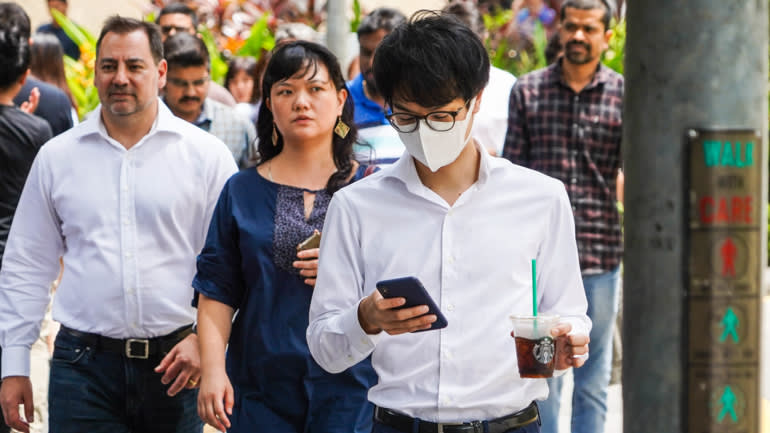 Singapore's financial district. Lessons learned while activating split-team plans in Asia, which bore the initial brunt of the virus' spread, were applied by banks in London and New York. (Photo by Akira Kodaka)

While individual banks have their own ways of splitting teams, interviews with six traders at five banks revealed that less than a third of the team were allowed to be in the same trading area at the peak. Employees are rotating between headquarters and alternative sites, they say.

For instance, staff at HSBC, the biggest employer in the financial-services sector in Hong Kong, have the capacity to plug into the trading platform from multiple offices, including Olympic in Kowloon and Tseung Kwan O in the New Territories.

BNP Paribas traders work at multiple floors at the International Financial Centre in Central, offices in Tai Koo -- about a 15-minute drive from Central -- and the backup office in Kwun Tong in Kowloon.

Lessons learned while activating the split-team plans in Asia, which bore the initial brunt of the virus' spread -- such as time required to set the plans in motion, hurdles faced by traders in working away from their usual seats and communication challenges -- came in handy for banks as they began implementing procedures in the bigger trading hubs in London and New York, say people familiar with the banks' operations.

Gary, the banker in Hong Kong, says a surge in volumes as investors moved to hedge positions amid surging volatility complicated the split operations.

"We were caught out by the volumes, especially as teams weren't full strength yet after the holidays," he said. "Every day the work just increased, and we had to improvise on the go to ensure service levels didn't fall." 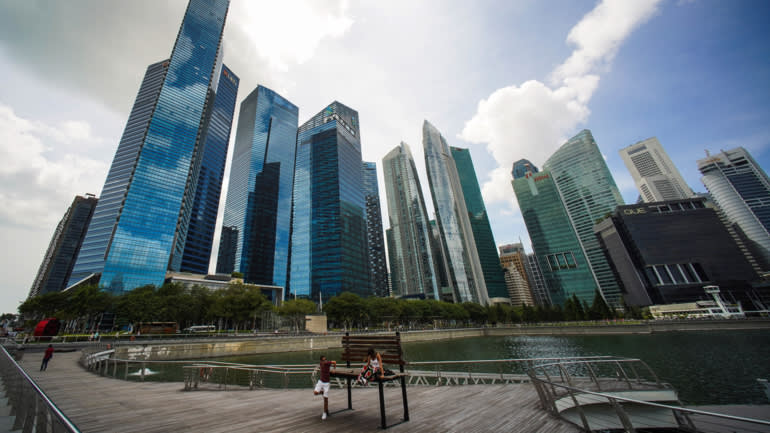 The CBOE Volatility Index -- Wall Street's fear gauge -- surged from 18.84 points at the end of January to 40.11 by the end of February, the highest level since the global financial crisis in 2008.

Foreign-exchange volumes in February surged to $450 billion, the most in eight months, while spot volumes climbed to a 20-month high, according to Refinitiv, one of the two biggest FX trading platforms in the $6.6 trillion-a-day global market.

Average daily turnover on the Hong Kong Stock Exchange rose 9% in February from a year earlier, while it climbed 44% in Singapore, according to data released by the two exchanges.

"Rising concern over the impact of the COVID-19 outbreak on the global economy and on supply chains drove heightened demand for risk management solutions across financial and commodity markets, lifting derivatives trading volume to a record," Singapore Exchange said in a statement.