President Satoshi Tsunakawa and other Toshiba executives hold the key as to whether involving so many activist investors in its capital increase will pan out.
TAKASHI OKU, Nikkei staff writerDecember 2, 2017 21:36 JST | Japan
CopyCopied

TOKYO -- Overseas investors are readying to take part in Toshiba's 600 billion yen ($5.35 billion) share offering as the Japanese conglomerate attempts to claw its way out of negative net worth.

But whether the hastily arranged financing is in Toshiba's best interest remains to be seen, as some of the roughly 60 investment funds awaiting the deal have a decidedly activist bent, with track records of using their voting rights to steer corporate decisions. 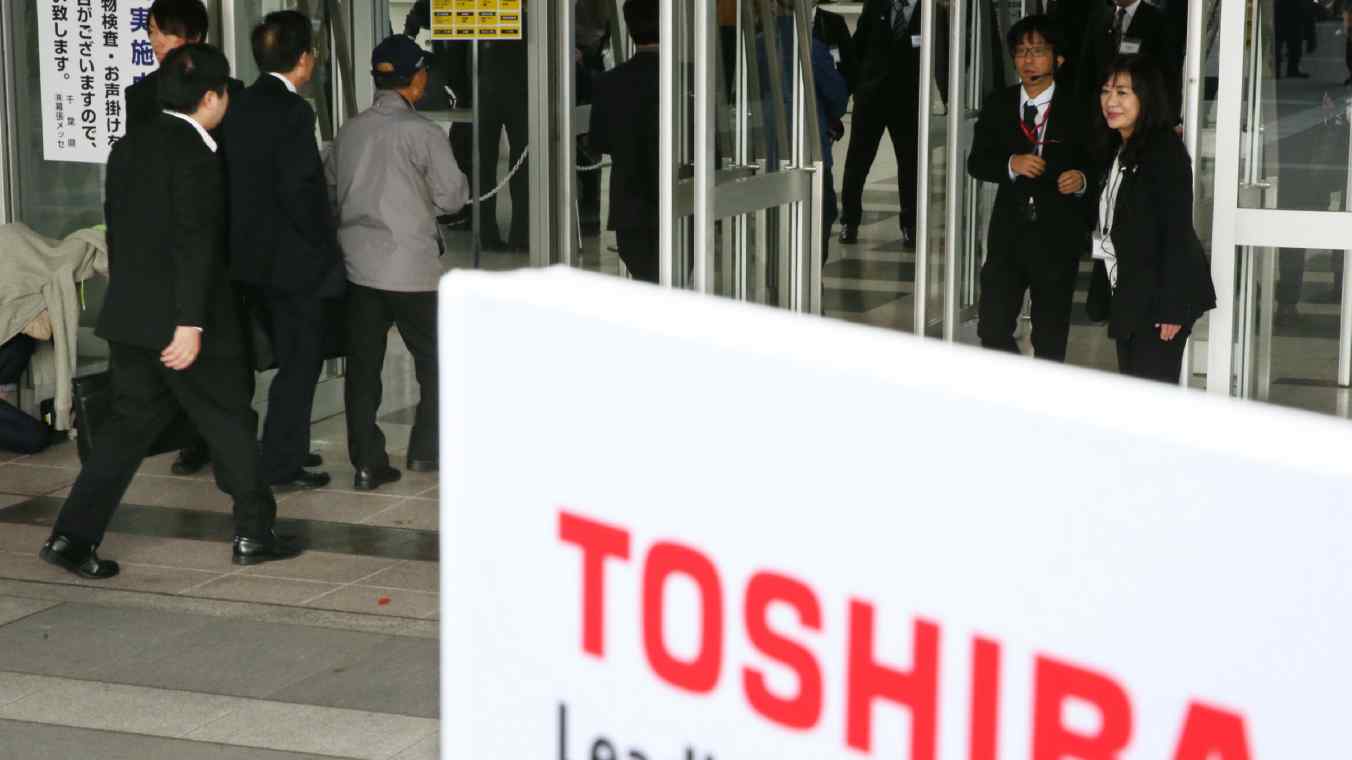 Segantii, which will buy 300 million shares, should not pose a problem as it refrains from exercising voting rights in principle and rarely involves itself in corporate matters. The company reportedly engages in asset management for pension funds in Europe and the U.S.

Another non-activist investor, Hunter Patton, owned 100% by the president of Harvard University and fellows, will purchase 170 million shares.

U.S. hedge fund King Street Capital Management, though, could be considered part of the activist camp.

The fund many observers are watching is Effissimo, staffed with former colleagues of the tough Japanese activist investor Yoshiaki Murakami. The firm will hold the largest stake in the deal, scooping up 320 million shares, or 14% of the total offering.

Effissimo has already planted itself in other Japanese companies -- among them Kawasaki Kisen, Dai-ichi Life Holdings and Ricoh -- and has an aggressive reputation. At Kawasaki Kisen's 2016 general shareholders meeting, the company used its weight as the largest shareholder with a stake of nearly 40% to oppose the reappointment of President Eizo Murakami as a board member. 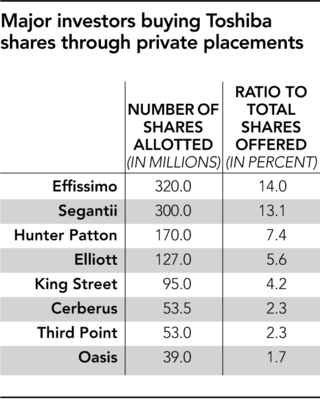 The president eventually regained his position, but the close vote sent the clear message that Effissimo was not to be ignored. At the annual meeting this year, Effissimo voted for Murakami's reappointment, but only because CEO Takashi Kousaka was informed by Kawasaki brass of the company's upcoming business plans -- in advance and in detail.

Effissimo strategies can be likened to those of the other Murakami, but are seen as more rational, according to market players. At Ricoh's general meeting this year, for example, Effissimo disputed bonuses for board members, saying that, while executive bonuses are OK in principle, those unmatched to earnings are not.

Not to be messed with

Effissimo may be a tough customer, but its activism pales in comparison to other funds. Elliott and Third Point are cases in point. Both are renowned for aggressive posturing toward the companies in which they invest.

Elliott, which will walk away with nearly 130 million Toshiba shares, is now being closely watched, as it holds almost 9% of Hitachi Kokusai Electric, which U.S. investment fund Kohlberg Kravis Roberts has been trying to acquire.

Since Elliott's interest in Hitachi Kokusai, stock prices in the Japanese semiconductor-equipment maker have risen above KKR's tender offer as the buyout turns rocky. The initial takeover bid price has risen twice and the closing date for the tender offer has been pushed back, both to the benefit of Elliott.

The activist fund has been busy on other fronts, too. It urged BHP Billiton, an Anglo-Australian natural resources company, to sell its U.S. oil business, and asked Samsung Electronics to pass 30 trillion won ($27.6 billion) on to shareholders. It also forced the CEO of Arconic, a leading American aluminum company, to resign.

Paul Singer, founder and head of Elliott, is as hardcore as they come, saying recently in a 2017 report to investors that passive investment "is in danger of devouring capitalism."

Another activist fund involved in the Toshiba deal, Third Point, once demanded that Sony spin off its movie and entertainment business. It also had Fanuc return hefty benefits to shareholders, and demanded Seven & i Holdings to separate Ito-Yokado in order to rebuild the supermarket chain.

The fund, led by billionaire founder Daniel Loeb, has even called for Nestle, the world's largest food and beverage company, to improve its profit margin.

Then there is Oasis, which has been stepping up pressure on Japan's Pasona Group, noting that the presence of Yasuyuki Nambu, founder and representative of the group, has resulted in lackluster corporate governance.

"It has missed a lot on the governance side," Seth Fischer, founder and chief investment officer of Oasis, told the Nikkei Asian Review on Nov. 10, a day after he launched the campaign against Pasona. He felt Nambu was running the company almost like a private company.

"Maybe, in many ways, he has some very nice ideas, but they are inappropriate in a public company," Fischer said, citing projects such as building a zoo in downtown Tokyo, having an extraordinarily expensive guesthouse, and ploughing 3.55 billion yen ($31.6 million) into constructing loss-making theme parks.

The Hong Kong-based fund has also put Alps Electric on notice about its plan to make Alpine Electronics into a wholly owned subsidiary, complaining about the proposed share-swap ratio and calling for a cash deal and hike in purchase price.

Commenting about Toshiba's offering, Akinosuke Ishigaki, head of the investment banking division at IR Japan and familiar with activist funds said, "It's rare for so many prominent activists to gather at a single company."

There is some speculation as to what will happen to Toshiba with so many activists on board.

Few people familiar with the deal, though, forecast any major moves. One official at a fund that has participated in Toshiba's financing said, "Effissimo, the biggest shareholder, is unlikely to take a leadership role," denying the possibility of concerted moves to pressure Toshiba.

Another said, "There remain few incentives to foist demands on Toshiba, but changes in management may be proposed."

Financing for the deal was arranged in a relatively short period of time, despite the amount involved. And there is real risk for investors, as Toshiba faces delisting because it has fallen into negative net worth.

Under the circumstances, traditional investors, such as pension funds, cannot buy into Toshiba because of their investment rules, noted Ishigaki of IR Japan. "Investors that can afford to pay just happened to gather," he added.

Goldman Sachs has arranged the financing scheme. The New York-based investment bank found that investors judged Toshiba's fair value to be at about 400 yen per share, according to people familiar with the deal.

Therefore, the offer price of around 263 yen per share is attractive enough for pure investment purposes, requiring no specific action by those involved, said an official at an American activist fund involved in the deal. The fund may gain a positive image in Japan by supporting a company deemed to be in line with national policy, he said.

Nevertheless, activists are activists. If Toshiba's stock fails to approach the assumed fair value of 400, then the gloves may come off. There may even be calls for canceling the planned sale of Toshiba's prized flash memory business, which could galvanize others to support the move.

Ultimately, Toshiba management holds the key as to whether inviting so many activist investors to the table will prove to be successful.