The economies of South and Southeast Asia are all in their own unique stages of development, and each capital market faces a different set of challenges. A common theme, however, is that new business opportunities are cropping up across the region.

While Singapore explores how to better compete with Hong Kong in attracting investors to its stock market, Myanmar is yet to establish a secondary market for bonds. Members of the Association of Southeast Asian Nations are aiming for financial market integration, but the level of development varies hugely across the bloc, slowing the integration process.

India is making headway in the long process of economic reform, including capital-flow liberalization, which will shape the future of the country's capital market. 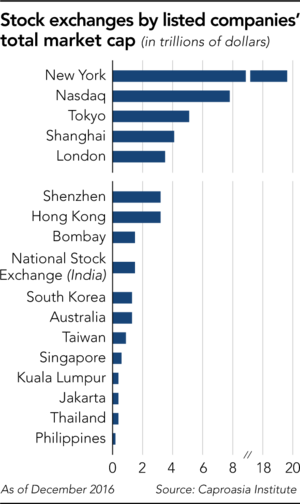 The two most developed economies in the region are competing for the title of Asia's No.1 financial center. Hong Kong's stock exchange dwarfs Singapore's in most metrics, including the total market capitalization of listed companies, trading volume and initial public offerings. Yet, Singapore is a hotbed for hedge and private-equity funds as well as private markets of various commodities futures.

India's two major stock exchanges are competing and growing. Combined, they are the fourth largest Asian equity market. The stock exchanges of Malaysia, Thailand, Indonesia and the Philippines are of similar size and also competing to achieve greater liquidity. They are discussing how to connect with each other to form an integrated market, but progress has been slow. 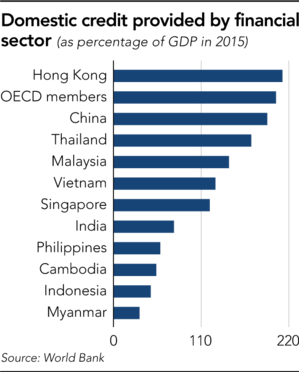 When Myanmar launched the Yangon Stock Exchange in March 2016, it left Brunei as the only ASEAN member without its own exchange. Now, the sultanate could launch one within 2017.

The less prominent ASEAN stock exchanges are all struggling. Only four companies have listed on the YSX. Myanmar is still in the process of drawing up legislation governing finance and investment and the incorporation and ownership of companies. The YSX will fully function only once the soft infrastructure is in place.

Only five companies are listed on the Lao Securities Exchange and four on the Cambodia Securities Exchange. It would not surprise observers if these countries started discussing consolidation with each other and with the Stock Exchange of Thailand -- the regional big brother -- for more liquidity.

The debt market in Asia tends to be less developed than that for equity. The ratio of credit provided by the domestic financial sector is less than 100% of gross domestic product in India, the Philippines, Cambodia, Indonesia and Myanmar, according to the World Bank. The figures suggest that businesses are underserved by financial institutions. In developed countries, the ratio is typically around 200% of GDP.

Myanmar only started auction sales of new government bond issues in 2016 and a public secondary market does not yet exist, making it difficult to introduce market-based interest rates on bank deposits and loans.

The principal value of corporate bonds outstanding is below 10% of GDP in the Philippines, Vietnam and Indonesia -- countries with a combined population of roughly 460 million. And the secondary markets for both government and corporate bonds tend to lack liquidity in most Southeast Asian countries. With the existing financial sector and capital markets unable to fulfill the needs of businesses, private-equity investment is thriving across Asia, especially venture-capital investments into high-growth startups. Seven of the ten largest VC deals in 2016 took place at Chinese startups.

The application of advanced information technology to financial services, or fintech, is becoming a significant factor.

Peer-to-peer lending is burgeoning in almost every country in the region. Most such services employ technology to evaluate the insolvency risk of individual borrowers and set interest rates according to risk levels. Some startups are selling risk evaluation services without being involved in lender-borrower matching.

Singapore is striving to become an Asian fintech hub. The city-state finds itself in an ideal position -- surrounded by countries abounding with business opportunities because of their capital markets' relative underdevelopment. The resulting increase in new fintech startups may provide a better chance for Asia to become the launchpad of a new type of capital market.