HONG KONG -- Chinese banks are at risk of having to set aside billions of dollars more to cover loans that have gone sour due to the coronavirus pandemic, complicating Beijing's attempt to reignite the economy.

Analysts expect China's big listed banks to make much higher bad-loan provisions on their balance sheets as a result of accounting standards implemented since the 2008 financial crisis. Higher provisions will squeeze profits and capital levels, restricting banks' ability to lend to stimulate the economy.

China relies heavily on bank lending to turbocharge its economy, mainly from its "big four" -- Industrial & Commercial Bank of China, China Construction Bank, the Agricultural Bank of China and the Bank of China -- but increasingly regional lenders as well.

Bank balance sheets, however, were already under pressure before COVID-19 from the weakening economy and the trade war with the U.S.

The consequences of the coronavirus outbreak could add $497 billion in nonperforming loans and $224 billion in provisions to China's banking system, according to an estimate this month by Standard & Poor's, a credit-rating agency.

China's $40 trillion banking system, the largest in the world, had $1.5 trillion of bad debt at the end of 2019, according to an estimate by accountancy PricewaterhouseCoopers.

The current sharp economic downturn triggered by the coronavirus pandemic is the worst since China's largest banks adopted new accounting standards in 2018 -- in the case of banks listed in Hong Kong -- and 2019. Collectively, this group holds about four-fifths of China's banking assets. Unlisted banks have until 2021 to implement the changes.

One of the standards adopted, International Financial Reporting Standard 9, directs banks to make provisions based on expected credit losses, rather than losses already incurred as they used to.

The coronavirus outbreak is expected to drive up expected losses, and force banks to recognize them immediately, eating into their available capital.

Yulia Wan, an analyst with ratings agency Moody's in Shanghai, said: "The world is still grappling with the virus outbreak, and that will hurt demand. Clearly banks will have to raise their expected credit loss assumptions and increase provisions." 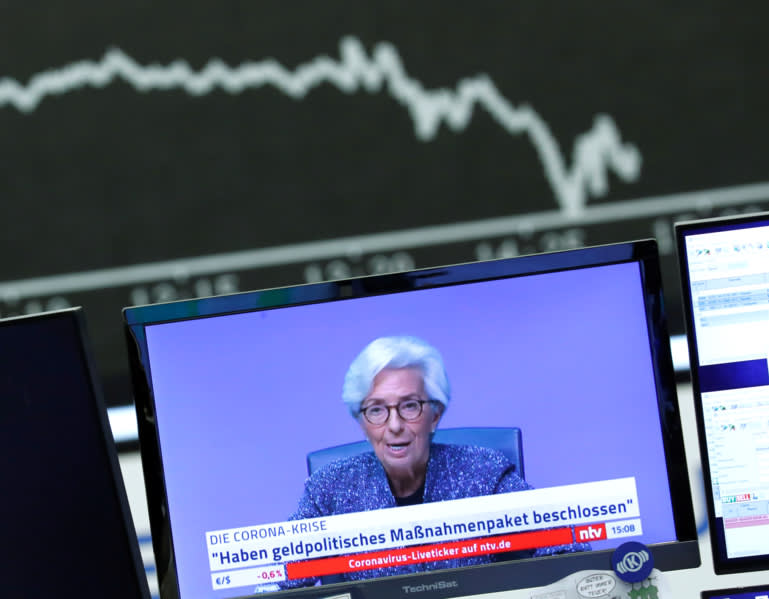 Some financial regulators, including the European Central Bank led by Christine Lagarde (above), have suggested banks have some leeway over how to account for impaired loans during the coronavirus pandemic.   © Reuters

Kelvin Leung, greater China banking and capital markets leader at consultancy EY, said: "There is still a level of uncertainty on when the pandemic will be contained. In such a scenario, there will be an uptick in expected credit losses in the second and third quarter. Certain sectors, such as hospitality and retail, are getting hit and some loans to companies in these sectors may need to move to be provided for the lifetime of the loan."

Shares in the four biggest banks have dropped between 8% and 14% in Hong Kong this year compared with a 15% drop for the Hang Seng Index.

Chinese authorities have announced measures to curb the rise in loans that are formally in default. Small- and medium-size businesses can apply for a delay in repaying loans or interest until the end of the second quarter, the China Banking and Insurance Regulatory Commission and the People's Bank of China said last month. Lenders were also told not to downgrade loans with missed payments or report defaults arising from such accounts.

Similar concessions apply to all companies in Hubei Province, the epicenter of the outbreak.

But outside Hubei, no such concession has been made for larger companies.

Some regulators in other parts of the world have offered banks relief from the consequences of IFRS 9. The European Central Bank has asked lenders to avoid excessive procyclical effects when applying the accounting rule. The UK's Prudential Regulation Authority has said lenders should take account of both the temporary nature of the shock and support provided by authorities.

The Basel Committee, which sets rules for global banks, has also said the expected credit loss model need not be applied mechanically in the current situation. They have encouraged banks to seek guidance from regulators.

Some analysts say China's banks could decide to declare any shocks temporary and avoid any increase in provisioning.

There would be "no major conflict with [an] expected credit loss model if the repayment difficulties are considered temporary, given the potential credit loss is projected based on the whole life cycle of the loan," said Iris Tan, a senior analyst at Morningstar, an investment research specialist.

However EY's Leung said banks "shouldn't hesitate to take on the higher provisions now" adding that they had enough capital buffers to manage.

"Otherwise the uncertainty from rising [bad loans arising] from COVID-19 will hang over the sector," Leung said. "The banks should also avoid the moral hazard where they use regulatory lenience and [decide not to] set aside money for loans that were going sour even before the pandemic hit."