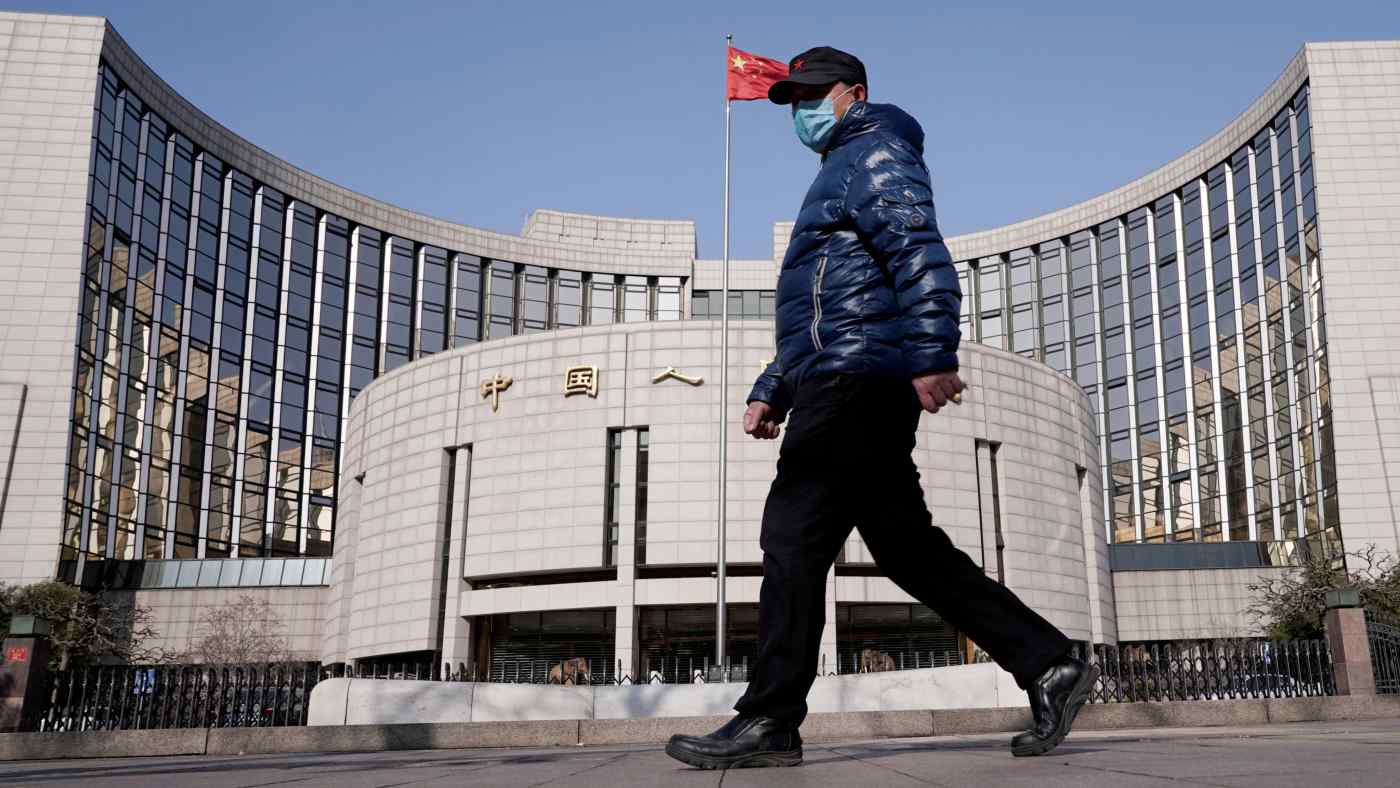 HONG KONG -- The worst could be over for Chinese banks.

Earnings for both state-owned and private lenders, which play an outsized role in the world's second-largest economy, are poised for a multiyear recovery from 2020's decline, the first drop in a decade, according to analysts' estimates.

A resurgence in profits is seen coming from an increase in fee income, an uptick in lending margins as authorities ease off from directing banks to cut rates to support companies, and some release of excess bad debt provisions set aside at the height of the coronavirus pandemic.

The lenders also are seen benefiting from a regulatory crackdown on Ant Group and other financial technology players. Requirements for higher capital allocation and curbs on consumer lending and credit scoring are expected to give banks room to compete on an even ground and recoup some lost market share, analysts say.

"Just as the risk of a blowout in bad debts subsides, other profit growth drivers such as fees and margins are coming back into play," he said. "Fourth-quarter earnings are showing positive signs. Growth should resume from the first half of this year and begin to accelerate from the fourth quarter." The earnings revival mirrors that of banks globally as loan losses of the pandemic year recede. Moreover, a change in fortune for Chinese banks would soothe investors who have feared that an avalanche of bad debt could mire the country's $50 trillion financial system and snuff out the economic recovery.

China's economy expanded 6.5% in the quarter ended Dec. 31 from a year earlier, pushing growth to 2.3% for the year. It was the only major economy to grow last year and is seen driving global expansion this year with an 8.2% increase.

Earnings of mainland-listed banks are expected to rise 4.5% in 2021, and increase 6.5% in 2022 and 6.8% the following year, according to Citigroup. Last year, China's entire banking sector profits fell 1.8%, the banking regulator said, citing preliminary statistics.

Preliminary reports by some lenders underscore the improving outlook. Industrial Bank and China Everbright Bank last month said their fourth-quarter profits surged 35% and 38%, respectively, the fastest pace since 2012, as their bad-loan ratios declined.

Meanwhile, Ping An Bank's fourth-quarter net profit surged 43% on lower credit costs as it wrote off bad loans, it said late Monday. For the full year, the unit of Ping An Insurance Group said net profit rose 2.6%, while revenue grew 11.3%.

"Normalization of monetary policy also means the People's Bank of China is unlikely to cut the loan prime rate further in 2021 and is likely to gradually exit relending programs, thus supporting a stabilizing net interest margin," she said.

Zhang expects banks' loan yields to improve on the back of credit demand and better loan pricing power. She estimates net interest margins will bottom out in the first half of the year and then "modestly" rebound. 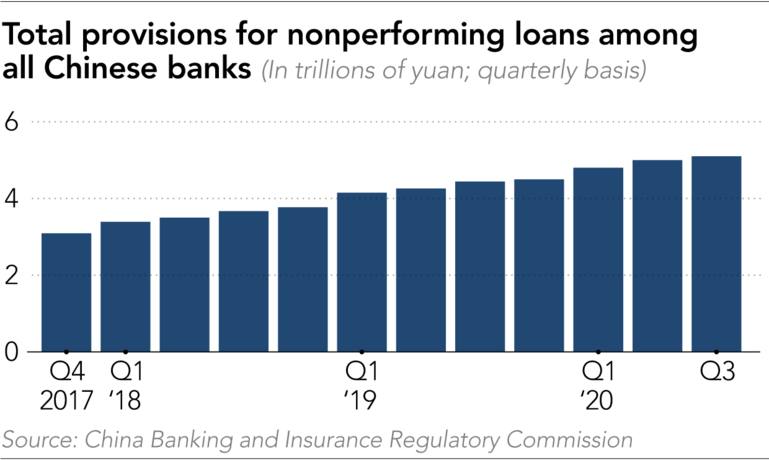 Fee incomes also are expected to rebound, expanding 7% this year compared with 4% last year, and accelerate up to 11% in the next two years, according to Macquarie Group analyst Dexter Hsu in Taipei.

Analysts also see the acceleration of capital market reform and the government's goal to promote direct financing to wean off companies from relying largely on bank loans to boost banks' advisory and underwriting businesses in the coming years.

The fortunes of lenders including the largest -- Industrial & Commercial Bank of China and China Construction Bank -- are still tied to their loan books, unlike their developed-market competitors that can fall back on fees ranging from credit cards to arranging deals for clients. Noninterest revenue makes up just over a fifth of the total for even the largest banks, while such business is the biggest contributor for global banks. China's biggest banks will report results over the next two months.

Analysts say a relaxation of equity refinancing rules, allowing tax advantaged retirement funds to invest in capital markets, and the possibility of banks getting brokerage licenses all could add to revenue.

Another factor that could help banks is the clawback of some provisions they set aside last year even though soured loans are expected to rise as the loan moratorium offered under regulatory orders expires in March.

More than 3.7 trillion yuan worth of loans to small businesses and companies engaged in exports and imports were under moratorium, representing 2.2% of loans across the banking sector, Liang Tao, vice chairman of the banking regulator, said at a financial forum in October.

In the first nine months of the year, money set aside to cover loan losses across the Chinese banking sector soared to 5.1 trillion yuan from 4.5 trillion yuan at the end of the 2019, according to data from the regulator. The provisions covered 3.53% of outstanding loans, compared with 3.46% in 2019. Soured loans, which include those officially classified as nonperforming -- the so-called special mention loans or lending potentially at risk of becoming bad and borrowings that had a repayment holiday due to the pandemic -- are forecast to reach 8.5% of total loans in 2020 from 4.78% in 2019, Harry Hu, senior director financial institutional ratings at S&P Global Ratings in Hong Kong, wrote in a report. The figure is estimated to decline to 7.56% in 2021 and 6.6% in 2022, helped by write-offs and loan growth.

Investors already are warming up to bank stocks. The CSI 300 Bank Index, a gauge of Chinese bank shares, touched a three-year high in January and is at levels not seen before surging bond defaults, souring loans and a homegrown liquidity crunch made them untouchable in 2018.

"Chinese banks are obviously trading at a trough valuation, which reflects a weak earnings-growth profile and the market's concern on rising NPLs due to COVID-19," said Jing Ning, who manages Fidelity's China Focus Fund.

"However, as a cyclical recovery of the economy continues to gain pace both in China and around the world, I think Chinese banking stocks offer decent upside with earnings recovery in 2021," she said.

Mainland-listed banks are trading at 0.75 times the value of their net assets compared with 1.14 times in 2019, which indicates the stocks are undervalued by the market.

A recent survey by China Merchants Securities showed 52% of the 48 mutual funds and asset managers polled said they were positive on mainland-listed Chinese banks over the next three months. About 40% were neutral.

While the mood is turning positive, investors caution that risks are still large, with banks facing capital pressure after the 2020 profit decline dented internal capital generation and a looming slowdown in credit growth as authorities move to cut borrowing across the economy.

Other challenges include the possibility of the economic recovery losing momentum, further deterioration in Beijing's relationship with Washington and a flare up in the pandemic, all of which could lead to a surge in defaults. Analysts also warn that troubles at smaller unlisted banks with inadequate capital and loan loss provisions could erode investors' confidence in the banking system.

"Chinese banks were among the first to be impacted by COVID-19, but early signs of recovery have appeared and China's banking sector is anticipated to not just underpin, but lead regional growth this year," he said. "Domestic demand will be a strong contributor to this growth, as the rest of the world continues to emerge from the pandemic."