Economists and analysts fear prosecution or self-censorship in research reports HONG KONG -- Financial professionals in Hong Kong are fearing that their forecasting work and recommendations of stocks and other investments will soon run afoul of China's proposed security laws for the city, leading to self-censorship by their companies or possible criminal prosecution by authorities.

Seven analysts and economists interviewed by the Nikkei Asian Review said they were concerned that they might unintentionally transgress Beijing's redline and land in trouble. Some of their employers are already taking a conservative approach, and at least one person said he was looking to relocate to London or Singapore to safeguard himself and his work.

The concern expressed by finance industry professionals is just another facet of the possible fallout from the security laws. Hong Kong's status as a global financial hub is in question. Its wealthy residents are already opening offshore accounts, and some people, such as activist investor David Webb, are forecasting a brain drain. The Financial Times recently reported that hedge funds were considering leaving the city.

The proposed security laws are in part an attempt by Beijing to quell yearlong anti-government protests in Hong Kong. It will criminalize activities pertaining to "separatism, subversion, terrorism and foreign interference," with Chinese intelligence and security agencies set to formalize their presence in the city, according to draft legislation.

China's top decision-making body, the standing committee of the National People's Congress, was expected to deliberate the details of the law in a three-day meeting starting on Thursday. 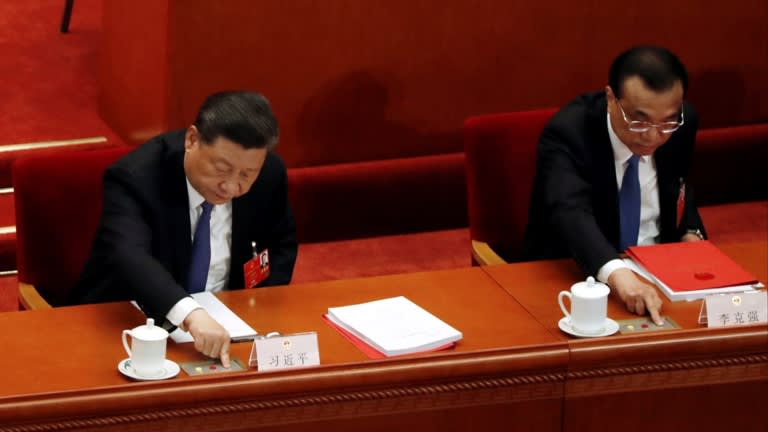 Chinese President Xi Jinping, left, and Premier Li Keqiang cast their votes on the national security legislation for Hong Kong at the closing session of the National People's Congress in Beijing on May 28.   © Reuters

"Hedge funds will be reluctant to short certain stocks if they might run into a campaign against them. Western banks that are already pulling their punches in current research, will become even more concerned about the optics of stock and macro reports that reflect badly on Chinese or Hong Kong issues," Collier said.

"Companies doing business in Hong Kong are now likely to come under the same degree of surveillance as has long been the norm in mainland China," Nigel Inkster, formerly the assistant chief and director of operations and intelligence for Britain's Secret Intelligence Service, wrote in a recent report issued by Enodo Economics.

"They can also expect to find themselves coming under pressure if they make business decisions not seen as being in the interests of the Chinese state under the rubric of Beijing's all-encompassing concept of national security," Inkster wrote.

That possibility is exactly what causes alarm for one Hong Kong-based equities analyst, who draws parallels to the events that unfolded in 2015 in China during the stock market rout.

Back then, senior executives of hedge funds and investment banks on the mainland were arrested on suspicion of illegal trading, and a business journalist was detained and later apologized on national television for writing an article that authorities said could have harmed the market.

The equities analyst, who requested that only his surname of Cheung be used for this article because of the sensitive nature of the issue, said that his then-employer, a Chinese brokerage company, had asked analysts in mainland China at that time to "be careful" when publishing their views on the market.

Such apprehension comes despite assurances from the Hong Kong government that there is nothing to fear from the proposed security laws. In an interview with Nikkei in May, Hong Kong Commerce and Economic Development Secretary Edward Yau said general business activities would not be affected by the new security regulations.

"Market analysts doing their job -- as long as they're not doing this to subvert government or to split the country, or to invite terrorism or foreign influences -- why should they worry?" Yau said.

But finance professionals hold a different view. "At that time [2015] I felt glad that I worked in Hong Kong instead of mainland China," Cheung said. "It is supposed to be a place where all opinions are welcome... But this is no longer the case. The security laws will inevitably lead to self-censorship."

Signs of self-censorship were already on display in Hong Kong last year when some banks -- both global and mainland Chinese -- avoided mention of Hong Kong's anti-government protests in research notes.

For instance, economic and market outlook reports for 2020 issued late last year by UBS and Macquarie did not mention the Hong Kong protests. UBS declined to comment. Macquarie also declined to comment, but its report, which did not mention the protests, was a global outlook. However, the bank's sector analysts have referenced the impact from the unrest on some companies they cover.

Research heads and chief economists of five banks and brokerage firms declined to comment on their organizations' plans to cover the security laws.

Three executives -- one from a local trading house, one from an Asia-Pacific lender and one from a global bank -- said this time round, while they have not been banned from writing or speaking about the implications of the laws, any material that references the laws has to pass several extra layers of checks before it lands in clients' inboxes.

While they said no investor reports had been rejected yet, one of the three said a report issued earlier this month had parts marked "rewrite." The strategist did not cull anything from the report, but instead tweaked the marked portion and amended some phrases.

"We are in the precipice," said an economist at a global investment bank. "There is no written memo as yet on what we can and what we can't [cover], as the law hasn't been formulated. However, there have been subtle verbal signals to tread a conservative path for now." The Hang Seng Index tumbled 5.6% on May 22 after Beijing announced draft legislation that will pave the way for it to set up national security institutions in Hong Kong.   © Reuters

Another equity analyst at a global brokerage company in Hong Kong, a citizen of mainland China, said he is considering relocating to London or Singapore, citing a possible crackdown from the laws and the protracted social unrest in Hong Kong.

"I don't want to receive warnings from security agents here one day," said the analyst, who moved to Hong Kong more than five years ago. "I will have no choice but to keep quiet... I am a Chinese passport holder, after all."

Hong Kong residents took to the streets a year ago to protest against a now-withdrawn proposal that would have allowed the extradition of criminal suspects from the city to the mainland. The movement eventually expanded to matters including universal suffrage and preservation of the city's autonomy.

Collier said that since the laws appear likely to be "nontransparent," it will be more difficult for the financial services industry "to draw a clear line about what they can and cannot do."

"Meanwhile, if some Western funds and banks decide to leave Hong Kong, that could lead to the gradual 'mainlandization' of Hong Kong's financial system," he said. "None of this will occur overnight, but will be a problem over time."

A survey conducted last month by the American Chamber of Commerce in Hong Kong found that about two-thirds of the respondents were concerned about the ambiguity in the scope and enforcement of the security laws, while more than one-third said they were pondering whether to leave Hong Kong in light of the laws.

"However, national security will mean that a lot of companies will have to move their data servers out of Hong Kong to ensure that China does not get hold of their information," he said.