HONG KONG -- Chinese regulators have singled out 38 bank shareholders alleged to have been involved in related-party lending and other misdeeds, a sign of the authorities' rising concerns as loan books sour.

The names listed by the China Banking and Insurance Regulatory Commission include shareholders of Baoshang Bank, which last year became the first lender to be taken over by regulators in 18 years, and banks affiliated with Anbang Insurance, the acquisitive conglomerate seized a year earlier.

"There are still a few banks and insurance companies failing to abide by the regulations and which took part in related-party transactions, so as to make profit in improper ways," the commission said in a statement on its website. "In some cases, assets under banks and insurance companies are even being withdrawn illegally, posing a serious threat to the stability of financial institutions."

The regulator vowed to increase disclosure to single out major shareholders who break the rules.

"The regulators are sending out a message to ensure integrity and clean operation of banks and insurance companies," said Steven Leung, executive director of institutional sales at Singapore investment bank UOB Kay Hian in Hong Kong. "Such actions will instill a sense of responsibility and promote a cleaner and transparent shareholding structure." 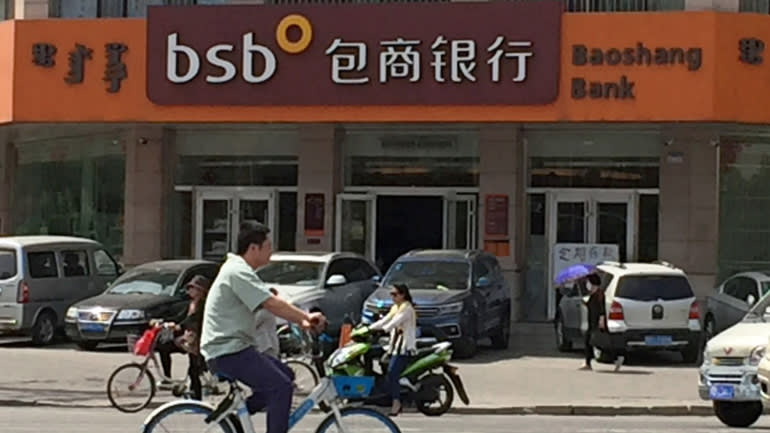 People pass by a branch of the bailed-out Baoshang Bank in China's Inner Mongolia Autonomous Region. (Photo by Issaku Harada)

Several of the entities on the commission's list also had connections to Chengdu Rural Commercial Bank, which was controlled by Wu Xiaohui, the former chairman of Anbang, who was sentenced in 2018 to 18 years in prison for fraud and embezzlement.

China is trying to clean up its banking system, the world's largest. Chinese banks held $1.5 trillion in bad debt at the end of 2019, according to PwC. The coronavirus outbreak could add $497 billion in nonperforming loans, ratings agency Standard & Poor's has said.

Regulators have been clamping down on shareholder misconduct over the past few years to eliminate financial risk by stamping out practices such as related party transactions in which founders or their companies are lent money without proper due diligence; falsification of documents; and fraud.

Shareholder missteps have "affected the stable operations of financial institutions," the regulator said. "The purpose of the disclosure is to send a signal that shareholder supervision will be further tightened."