HONG KONG -- China's largest banks have followed global rivals in setting aside record funding to cover loan losses after regulators ordered them to accelerate provisions, as the economic impact of the coronavirus pandemic casts doubt on the ability of companies and consumers to repay.

The provisions sent the combined profits of China's four largest lenders tumbling by more than 10% in the first half of 2020, the sharpest decline in over a decade. Bad loans are expected to surge, with margins on new loans sliding after Beijing ordered the banks to reduce interest rates to stimulate the economy.

As a result, analysts and economists are urging banks to cease paying out 30% of profits as dividends, in order to preserve capital.

The four big state-run lenders -- Industrial & Commercial Bank of China, China Construction Bank, Agricultural Bank of China and Bank of China -- collectively boosted loan-loss provisions by 43%, the biggest rise in five years, according to data compiled by the Nikkei Asian Review based on regulatory filings. The provision almost doubled at Bank of China, the data showed.

"It's going to be a hard slog for the banks with interest margins falling, asset quality deteriorating and fee income under pressure," said Alicia Garcia-Herrero, chief Asia Pacific economist with Natixis in Hong Kong. "The profit drop sends a message across to authorities. Banks are getting weaker; dividends need to be slashed and equity infused to keep the sector in reasonable health."

Banks globally are being forced to ratchet up provisions, but China's $45 trillion banking system faces onslaughts from several fronts, hampering efforts to cut risk. While bad debts are rising, the banks also must cede 1.5 trillion yuan ($218 billion) in profits to support companies of all kinds by lowering lending rates and fees as well as deferring loan payments. The world's largest banking system also is bracing for fallout from tensions between Washington and Beijing, including U.S. sanctions on Chinese officials over alleged human rights abuses against the Uighur Muslim minority and the crackdown in Hong Kong. The banks could be slapped with fines for dealing with certain officials, and there also is speculation that Washington will deny dollar funding access to Chinese banks.

"The banking industry is facing a more complex and volatile external environment," China Construction Bank said in a statement, referring to the pandemic and the impact on economic growth, which the company expects to hurt "asset quality and dampen the growth" of its income and profits. "The rising geopolitical tensions and deepening economic and trade frictions between some countries bring increasing instability and uncertainty."

The world's second-largest economy grew 3.2% on the year in the April-June period, reversing a 6.8% decline in the first quarter, but the recovery remains fragile. A Nikkei poll in July showed that China's economy is expected to expand 1.6% in 2020, down from a 3.3% estimate in the previous survey in March.

All four banks, which released their earnings late Friday and over the weekend, signaled they expect more challenges.

Agricultural Bank of China said that "the impact of the epidemic and the risk of uncertainty are expected to be further transmitted to the banking industry." China Construction Bank and Bank of China said they will review the risks and consider increasing provisions further if needed.

ICBC, the world's largest lender by assets, "hopes to prepare for uncertainties in the future by increasing provisions," he said. 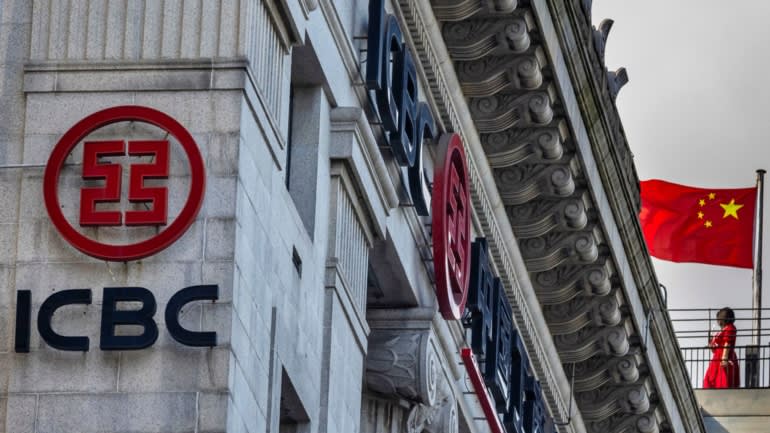 An Industrial & Commercial Bank of China branch in Shanghai: Net interest margins in the first half declined at ICBC, Agricultural Bank of China and China Construction Bank.   © EPA/Jiji

Bank of China officials in a call on Monday said the lender will consider factors such as demand from regulators and shareholders to determine a "rational dividend policy."

Such moves mean that Chinese banks finally are following the global parade of financial institutions in increasing provisions after resisting earlier in the year.

HSBC Holdings has flagged loan-loss charges of as much as $13 billion this year, while the 15 largest U.S. banks and 32 European competitors have already provisioned for a combined $139 billion, the highest since 2009, data compiled by Citigroup shows.

The change in mindset was dictated by the China Banking and Insurance Regulatory Commission, as data showed a rise in bad loans.

Sour loans climbed for the sixth straight quarter ending June 30. The total reached 2.7 trillion yuan, the highest in more than a decade, the industry's regulator said on Aug. 10.

As banks raised provisions, profits declined, the commission said. The more than 1,000 commercial banks in the country had accumulated a net profit of 1 trillion yuan in the first half, down 9.4% from a year earlier, with the decline in the second quarter even sharper at 24%.

At the end of June, bad loans stood at 1.94% of total lending, according to the commission, up from 1.86% six months earlier. However, ratings agency S&P Global has estimated that nonperforming assets, which include rolled-over debt, could double this year to 10% from pre-pandemic levels.

Fees and commission income, which the banks derive from trading and advisory services, also lost momentum. This income, one of the drivers of profit growth since at least 2015, nudged up an aggregate 1.9% in the first half of the year at the four major lenders compared with an 11% increase a year earlier.

Shares of all four banks declined Monday on the Hong Kong Stock Exchange, the first day of trading after they revealed their results. ICBC fell 3.6%, China Construction Bank was down 2.8%, Agricultural Bank lost 3.4%, and Bank of China dipped 0.8%.

The banks are now valued at less than half their forecast net-asset value compared with a 10-year average of one times book value.