Investors snap up shares in KE Holdings, biggest such offering since 2018 HONG KONG -- Chinese online wealth management portal Lufax has filed a confidential prospectus to raise up to $3 billion in a U.S. initial public offering, joining a line of hopefuls looking to raise capital in the world's largest economy before a new rule effectively shuts off the funding channel.

Lufax, an unit of Ping An Insurance Group, hopes to launch the offering in the next two months subject to regulatory approval, two people familiar with the transaction said.

The company made its filing with the U.S. Securities and Exchange Commission on Monday even as Treasury Secretary Steven Mnuchin warned that Chinese companies listed in New York would soon be required to meet U.S. auditing standards.

"As of the end of next year... they all have to comply with the same exact accounting, or they will be delisted on the exchanges," Mnuchin told reporters, according to Reuters.

The Presidential Working Group on Financial Markets led by Mnuchin recommended on Aug. 6 that all future Chinese IPO candidates be required to allow U.S. regulators to review their audit records as a condition of listing, setting up a conflict with Chinese secrecy laws.

The process of putting this edict into force by the Securities and Exchange Commission, involving rule drafting and soliciting public comment, could take 30-60 days, according to market players.

"The strong demand for quality Chinese names among U.S. investors gives us confidence to proceed with the IPO plan despite the impending crackdown by U.S. authorities," an adviser to Lufax said. "Time is of the essence and we are racing ahead to ensure the transaction goes ahead smoothly." 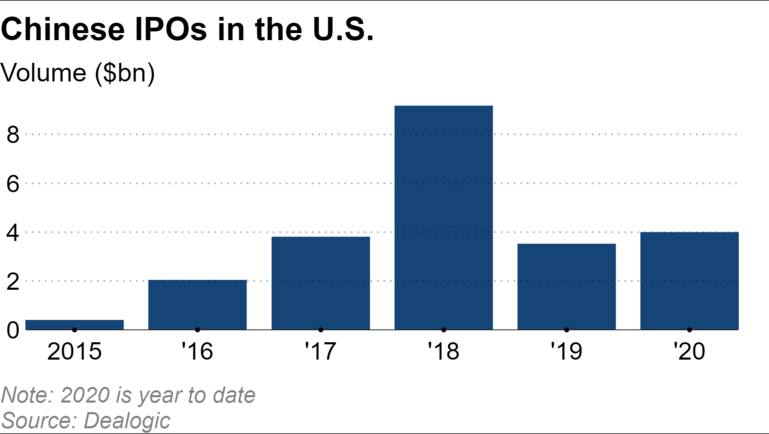 KE Holdings, also known as Beike Zhaofang, has begun taking orders for the largest Chinese IPO in the U.S. in two years and is set to close its books amid strong demand later on Tuesday, which would be earlier than expected, according to two people familiar with the deal. The company could raise $2.01 billion at the top end of the IPO's indicative price range.

Lufax postponed a planned 2018 listing in Hong Kong amid a shift in China's consumer lending regulations. Since then, it has focused on wealth management and retail lending and has exited peer-to-peer lending.

A representative for Lufax declined to comment on the company's IPO plans. The company though on Monday announced it would enter the Hong Kong market with a wealth management app offering services free of transaction fees for an initial promotional period.

The company has picked Bank of America, Goldman Sachs, UBS and HSBC as lead arrangers for the planned float.

Chinese companies raised $1.8 billion through U.S. IPO for the year through mid-June. But in the days since U.S. President Donald Trump directed the White House task force to review the risks posed to American investors by Chinese stocks on June 4, such offerings have totaled more than $2.2 billion.

Li Auto, a rival of Xpeng backed by ByteDance and internet company Meituan Dianping, raised $1.1 billion on July 30 in the biggest Chinese IPO so far this year in New York. It priced its shares at $11.50 each, well above the initial guidance of $8-$10, due to strong investor demand.

The threat of forced delisting in the U.S. has spurred companies including Alibaba, online retailer JD.com and game developer NetEase to raise almost $20 billion via secondary listings in Hong Kong.