Success against virus, rivalry with US and central bank kick-start funding boom Chinese startups raised about $33 billion from investors in the first eight months of 2020, with the amount surging in the most recent months.   © EPA/Jiji
YUSHO CHO, Nikkei staff writerSeptember 13, 2020 13:30 JST | China
CopyCopied

SHANGHAI -- Zong Wenhao, the chief executive of Shanghai DominantTech, an autonomous driving startup, recently breathed a sigh of relief as his company managed to raise additional capital after months of frustration.

The funding valued the company at 100 million yuan ($14.6 million), a 10th of what Zong had expected, but the fact that the Shanghai-based startup was able to attract fresh investment after having sought it out since the autumn of 2019 speaks to the recuperation of the market.

"We are far from satisfied with the valuation," Zong said, "but we have succeeded in raising money, anyway."

Chinese startups in the first eight months of 2020 raised about $33 billion, according to Shanghai DZH, which offers financial data and data analysis for investors. While this amount is almost unchanged from the same period of 2019, a breakdown shows a dramatic trend. In the first three months, startups brought in around $7.5 billion. For the April-June quarter, their haul surged to more than $13.2 billion. Then in July and August, they attracted nearly $12.2 billion. The data exclude government bailouts of financial institutions, projects funded solely by the state, and projects funded solely by parent companies.

Clearly, Chinese startups have emerged from their mini ice age, one that began two summers ago. They have done so thanks to the country's success in halting the spread of the coronavirus, to its rivalry with the United States and perhaps especially to the central bank.

The People's Bank of China has been flooding the financial system with funds, providing a cushion against the pandemic and an aqueduct of sorts that has been serving startups. Last year with funds drying up, Zong Wenhao tried to sell Shanghai DominantTech to potential investors in pitch contests. With a new round of funding, though, he now plans to launch its businesses with several local governments.

Total social financing, or the total amount of money raised by businesses and individuals, reached 273 trillion yuan as of the end of July, up 12.9% from a year earlier, thanks to the People's Bank of China.

The cash has also provided a kick to stock markets. The Shanghai Stock Exchange's benchmark Composite Index has picked up less than 10% since the beginning of the year. Meanwhile, 170 companies have gone public on the Shanghai Stock Exchange's 1-year-old Science and Technology Innovation Board, known as the STAR market and dubbed the "Chinese Nasdaq." As many investment funds have earned sizable profits from these initial public offerings, venture capitalists have begun to place their bets.

Amid the investment boom, online medical care and remote learning have been especially hot sectors, mostly due to COVID-19 restrictions.

Zuoyebang, a Beijing-based startup providing online learning services for elementary school children, staged a large-sale marketing campaign this summer, offering 13 hours of online classes for only 9 yuan. The campaign has clearly been financed by the $750 million the company raised in its latest funding round.

Yuanfudao, another online education platform, is benefiting from the same thrust into online services. It raised $1 billion in its latest financing round. JD Health, an e-commerce platform for pharmaceutical products, and grocery delivery service Xingsheng Youxuan have each raised over $800 million.

Another tailwind, at least for businesses serving China's national policy agenda, has been the escalating conflict with the U.S. Hualan Biological Engineering, a major maker of blood products and flu vaccines, has raised 2 billion yuan to finance the construction of a new lab for developing new coronavirus vaccines.

A handful of Chinese COVID-19 vaccine candidates are now undergoing phase-3 clinical trials to verify the products' safety and effectiveness. But Beijing is not loosening its efforts to promote the development of more COVID-19 vaccines, which the government views as important instruments to help it expand its international influence.

SMIC has some of China's finest semiconductor processing technology. With U.S. sanctions making it harder for Chinese manufacturers to buy chips from Taiwan and South Korea, SMIC and SMSC are vital to Beijing's economic and technology battle with the U.S. 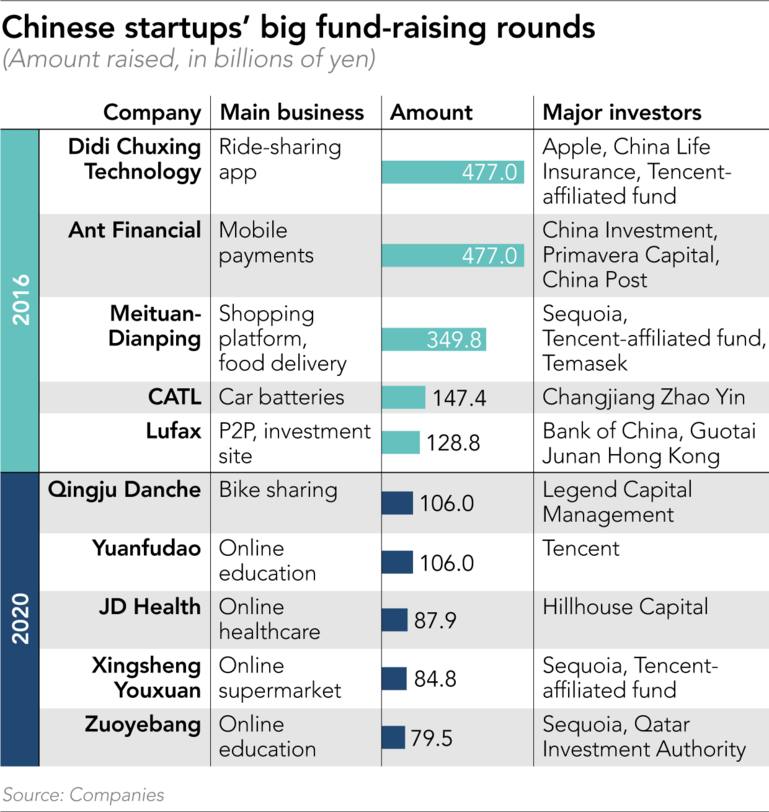 China's venture capital scene has often made headlines because of investment bubbles and high-profile debacles. But many Chinese startups have capitalized on the depth and breadth of domestic venture capital investing to become world-leading platform providers and global powerhouses.

Meituan is processing 30 million orders per day and plans to start testing robot delivery services by the end of this year, according to Xia Huaxia, the company's chief scientist.

Ant is poised to pull off a gargantuan initial public offering that is expected to raise $20 billion to $30 billion with simultaneous listings in Hong Kong and Shanghai, possibly next month.

While Chinese venture capital investing has started perking up, it is vital for those betting on the future of the country's industrial sector to rigorously assess startups' technological and innovative prowess.

There could be pitfalls. Zuoyebang claims that over 800 million children have used its online tutorial services, while Yuanfudao says it has attracted 400 million. But China has fewer than 300 million elementary and junior high school students.

The market is already getting overcrowded and extremely competitive, with these startups facing stiff competition from other players, including Genshuixue, an online education platform that has gone public in the U.S.

Much the same is true in other online service markets. Ping An Insurance and Alibaba are locked in a fierce rivalry in online health care. Hema Fresh, an Alibaba-supported supermarket chain that has developed its own online delivery service, is also facing tougher times ahead.

When the financing environment for startups deteriorated in late 2018, investment funds demanded that startups begin earning profits. It remains to be seen whether Chinese venture capital investing will return to the go-go days that came to a halt two years ago.