TOKYO -- Commodity trading firms have recently been receiving much more public scrutiny after decades of operating in relative obscurity.

Financial regulators and nongovernmental organizations are growing more critical of these companies, saying they are unde lax regulations and have opaque business practices. Calls are growing for greater regulations. 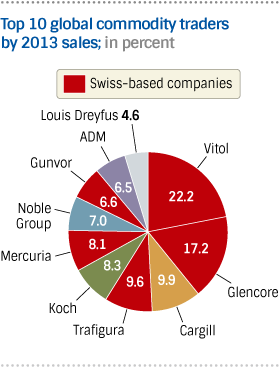 Commodity trading firms have grown significantly in the years since the resources boom of the 2000s, as they sold cheaply procured energy and minerals to consumers. More recently, these firms have been acquiring the operations of financial institutions in the U.S. and Europe that have withdrawn from the commodities market.

In the U.S., the debate has grown about whether to institute more regulations on commodity traders to safeguard futures trading. The Commodity Futures Trading Commission, a U.S. watchdog, such as in crude oil and crops, might impose limits on the size of speculative positions that commodity traders can make in the futures market. It would be a move similar to regulations placed on hedge funds.

Authorities in the U.S. and Europe have been tightening controls on financial institutions based on the lessons learned from the global financial crisis that started in 2008.

The Dodd-Frank Wall Street Reform and Consumer Protection Act, better known as the "Volcker Rule," was passed by the U.S. Congress in 2010 and prohibits banks from making certain types of speculative investments with their own money, including for commodity futures deals.

Under the act, for example, an investment bank operating oil refinery and gas supply networks are subject to supervision by regulators. This is because a serious facility failure could make the financial institution liable for enormous amount of debt, and this could affect the broader financial system.

Frustrated lenders are demanding that stricter regulations also be imposed on commodity traders that are expanding business outside of governmental regulations. There persists a concern that commodity trading firms that are currently exempt from regulations could trigger a chain reaction in the financial system should a crisis erupt.

In April, NGOs organized a demonstration near the venue of Financial Times Global Commodities Summit in Lausanne, Switzerland, while a number of prominent executives of commodity traders were attending the conference.

These protesters accused commodity traders of fleecing resource-rich countries of their natural resources and adding to corruption and environmental damage in these nations.

Switzerland is a major hub for international commodity trading and home to some of the world's biggest commodities companies. It is finding itself in a delicate situation over this issue as the country has attracted many commodity traders throgh lax disclosure requirements and low corporate tax rates.

Although the Swiss government acknowledges the need to enhance transparency in commodities trading, it also knows that such trading firms are responsible for more than 3% of the country's gross domestic product.

Naohiro Niimura, representative director of Market Risk Advisory, said that if speculative money declines due to withdrawals from financial institutions, this would make commodity prices become more influenced by actual demand from trading houses and other businesses. Also, lower liquidity of the market may render the market more sensitive to geopolitical risks, making it more difficult for consumers to hedge long-term risks.