TOKYO -- Natsumi Geji missed going to her favorite Chinese tea shop in the city of Fukuoka, on Japan's southern main island of Kyushu, and was left to hope that it could stay in business with no customers, then reopen when Japan lifted its coronavirus emergency.

But the 30-year-old also made use of an online tool to do more than hope. She contributed 12,000 yen (a little more than $110) to a crowdfunding campaign launched by china cafe for coupons she can use later.

China cafe says it will use the funds to cover its rent and utility bills until it's safe for its customers to come back.

It was the first time for Geji to join a crowdfunding campaign, and she seems to have had plenty of company while Japan's state of emergency lasted.

Crowdfunding helped small Japanese restaurants and other businesses endure the country's state of emergency, during which tens of millions of people stayed home and refrained from visiting their favorite haunts.

The nation was not an outlier in this regard. Platforms designed to help entrepreneurs go from idea to product by introducing them to customers or small-lot investors emerged as a key resource across Asia, throwing lifelines to businesses that were plunged into despair by the spread of the virus and social measures taken to combat it.

Campfire, Japan's largest crowdfunding platform operator, in early June announced it had raised about 3.9 billion yen in May, around six times more than its haul from 12 months earlier, thanks to its program supporting coronavirus-affected businesses. Over 90% of the funds raised in May came from reward-based campaigns; the rest came in the form of donations, according to Campfire.

One of Campfire's most successful emergency-support campaigns dealt with wagyu -- the Japanese beef known for its fine marbling, high-fat content and buttery mouthfeel that has gained a global following and is a much-anticipated treat among foreign tourists on their way to Japan.

At least it was when Japan was welcoming foreign tourists.

When the virus shut down air travel, wagyu demand from hotels and restaurants dropped sharply. This led Hida Agricultural Cooperative Association in Takayama, Gifu Prefecture, to run a crowdfunding campaign for high-grade Hida wagyu. It collected 110 million yen in about two weeks by offering supporters some succulent beef.

Tokyo-based Campfire says demand for its campaign services is on the rise among businesses and consumers alike. As a result, the provider is launching more projects than ever before, especially for retailers and businesses that had been benefiting from Japan's inbound tourist boom.

Crowdfunding is expanding in Japan. According to Tokyo-based research company Yano Research Institute, campaigns in the country are estimated to have procured more than 200 billion yen in 2018, nearly a tenfold increase from four years earlier. Most of the campaigns introduced entrepreneurs to small-time lenders; few were reward or donation campaigns.

But loan-based crowdfunding is not an avenue that all low-on-cash businesses and first-time entrepreneurs can go down. Nobuhiro Tsunoda, chairman of EY Japan Tax, says many businesses fail to pass crowdfunding platforms' screening process.

The number of reward-based crowdfunding campaigns, however, "could continue to increase, even after the coronavirus, though this will depend on what the new normal turns out to be," Tsunoda said.

The analyst said companies able to adapt to the new normal might succeed with crowdfunding but will also be more able to obtain capital from traditional lending channels, obviating the need for reward-based crowdfunding.

In contrast, companies that have trouble adapting might at first be able to find supporters on crowdfunding sites but will eventually be culled from the platforms, Tsunoda added.

Donation-based campaigns, a fraction of the overall market, have been on the rise since the pandemic began. When the nonprofit organization Japan Heart asked for public help in supplying masks to medical institutions, it received 100 million yen in 21 hours.

Although the size of Asia's crowdfunding market is smaller than that of the U.S., where the concept first took off, the amounts being raised are on the rise. 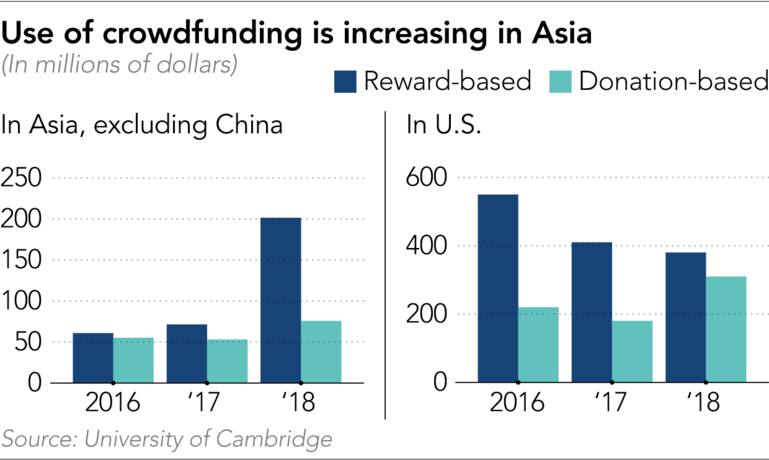 After the coronavirus outbreak began, GIVE.asia, crowdfunding's largest Asia-focused platform, found that the monthly donation amount on its platform had doubled compared to that of 2019. The Singapore-based operator says the surge coincided with pandemic-triggered cancellations of offline charity events across the region.

The "coronavirus has accelerated the shift to online donations and crowdfunding in Asia," GIVE.Asia founder Aseem K Thakur said.

According to GIVE.Asia, coronavirus-related campaigns supporting more than 100 projects had raised about 2.7 million Singapore dollars ($1.9 million) through the beginning of June.

The platform operator began noticing more demand for donation-based crowdfunding in March. In one two-month period during the outbreak, Weeboon raised as much as it did all of last year.

Thailand recorded the first coronavirus infection outside China, on Jan. 13, and the pandemic has gone on to hit the country's huge tourism industry particularly hard.

"Foreigners in Thailand were already familiar with this technology because it comes from the Western world," Nguyen said, "but we still need to raise awareness a lot amongst Thai people."