A leading member of the team that developed Pepper has raised additional funding for his latest robot project.
December 5, 2017 04:11 JST | Japan
CopyCopied

TOKYO -- Groove X, a Tokyo startup launched by a key figure in the development of SoftBank Group's Pepper humanoid robot, said Monday it has signed a contract to raise up to 6.4 billion yen ($56.7 million) through a private share placement.

The public-private investment fund Innovation Network Corp. of Japan will provide 1.4 billion yen on Dec. 18, with a maximum of 2.1 billion yen to be added later. Other major investors include Mirai Creation Investment Ltd. Partnership, a fund run by asset manager Sparx Group. This latest deal would lift the cumulative amount raised by Groove X to as much as about 8 billion yen.

Funds from the share issuance will be used for the development and marketing of the company's Lovot home-use robot, set to go on sale to the public in 2019. The robot is slated to be unveiled late next year. Not much detail has been revealed, except that it will be designed to offer companionship and comfort to people at home. 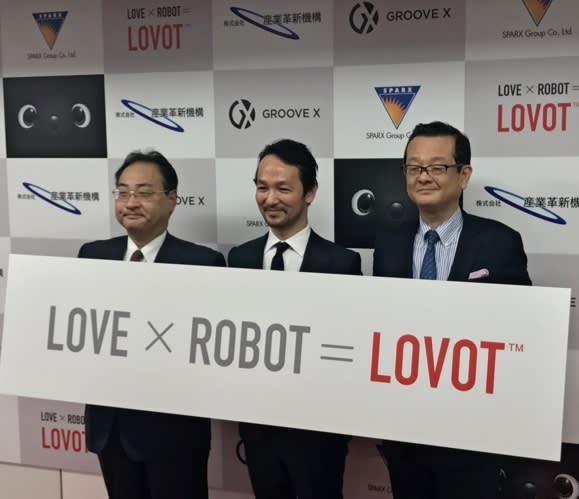 Groove X was established in 2015 by Kaname Hayashi, who is often referred to as "the father of Pepper." Hayashi was among the first outsiders to take part in SoftBank Academia, a project started in 2010 by SoftBank Group Chairman Masayoshi Son to identify and train his potential successors.

Hayashi, a former Toyota Motor employee, went on to work at SoftBank Robotics and led the development of Pepper. He left the company in 2015, following the release of the robot.

Having secured additional funding, Groove X has begun marketing activities for the Lovot. One such effort involves putting up ads near the offices of SoftBank and SpaceX, U.S. entrepreneur Elon Musk's space rocket venture.