Some $1.4 trillion worth of U.S. dollar-denominated bonds are outstanding from Asian countries, with more than half of that from China, according to Dealogic.    © Reuters
NARAYANAN SOMASUNDARAM, Nikkei Asian Review chief banking and financial correspondentMarch 30, 2020 12:15 JST | China
CopyCopied

HONG KONG -- The resilient U.S. dollar and the resulting weakness in emerging-market currencies amid the coronavirus pandemic is increasing the risk of default on Asian companies' corporate debt, potentially triggering a wider credit crisis.

About $115 billion in Asian emerging-market debt is set to mature this year and $200 billion next year, according to data from Dealogic. The dollar's 7% climb this month against a basket of currencies and a 243-basis-point blowout in Asia ex-Japan credit spreads could complicate the task of refinancing, and analysts are predicting that some stretched companies will have to seek restructurings with bond holders.

While no one is predicting a systemic crisis just yet, investors are watching China Evergrande Group, the country's largest property developer, and oil-and-gas producers and miners such as Vedanta Resources, which has its core operations in India.

Yields on dollar-denominated bonds of Vedanta due in 2021 soared to over 30% after Moody's Investors Service downgraded the company's credit rating earlier this month. Yields move inversely to bond prices.

Companies in Indonesia and India, where fiscal pressures and a widening coronavirus outbreak could further squeeze currencies, are also on the focus list. The Indian rupee touched a record low last week against the dollar, and Indonesia's rupiah has slid to its lowest level since the Asian financial crisis in 1998. 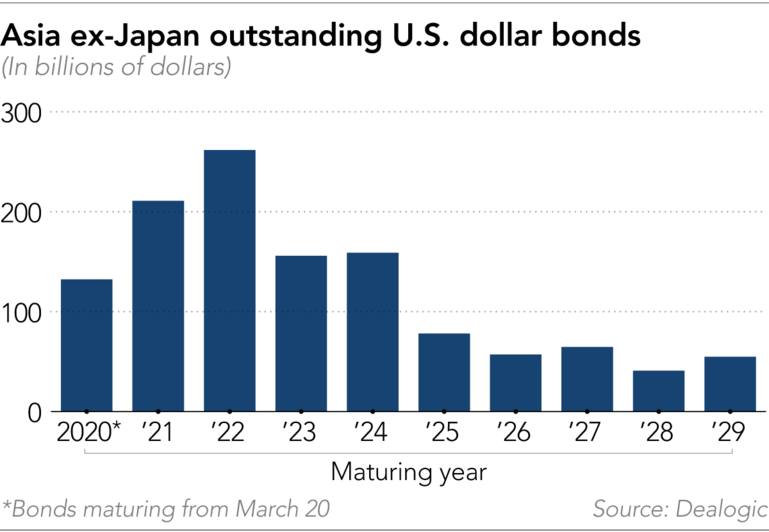 If the outbreak is not contained and the dollar liquidity squeeze due to the soaring demand for the greenback intensifies, analysts expect the vulnerabilities of carry trade-like transactions -- borrowing in the offshore dollar bond market where spreads before factoring in hedges and swaps can be half that of onshore local currency markets -- to be exposed as the greenback gains.

"At the peak of the last big market sell-off [in 2018], there were 150 bonds in the J.P. Morgan Asia Credit Index yielding over 10%. That number is now 301," said Jim Veneau, head of fixed income for Asia at AXA Investment Managers. The market is pricing in too much of a "default risk" and the refinance risk is higher in the current environment, he said.

Claudio Borio, the head of the monetary and economic department at the Bank for International Settlements, in a speech in September said the growth in U.S.-dollar borrowing following the global financial crisis was "troubling," because emerging-market economies are "especially vulnerable to boom-bust cycles in global capital flows."

Borio said that dollar credit to emerging-market and developing economies has doubled since 2008 to $3.7 trillion as of June 30, 2019, and it would not be "surprising" if the next episode of financial stress had greenback strength at its epicenter.

"At the moment, dollar liquidity is at a premium," said Ek Pon Tay, senior portfolio manager for emerging-market debt at BNP Paribas Asset Management in Singapore. "Among industry sectors under pressure are oil and gas and metals and mining, which account for a higher proportion within South Asia U.S. dollar credit." 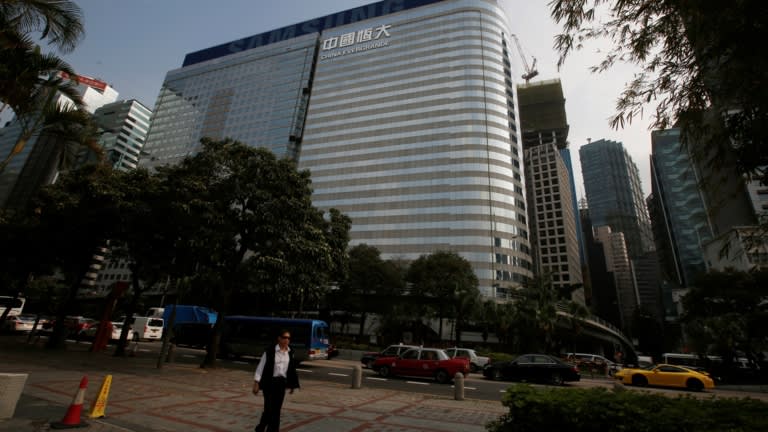 China Evergrande Centre in Hong Kong. The company's offshore bonds are yielding more than 20%, as hedge funds and institutional investors offload the paper, increasing the cost of borrowing and refinancing.   © Reuters

Tay says his firm is aware of the volatility in the market and has taken a market neutral position -- which attempts to completely avoid specific forms of market risk -- and will aim to understand the impact on South Asian economies before identifying long positions. Global banks, the primary providers of dollar liquidity, are also beefing up dollar cash positions as internal stress tests have showcased the weakness of emerging Asian assets.

The economic shocks and market convulsions brought on by the national lockdowns to contain the spread of the coronavirus have hurtled businesses to lock in dollars and investors to sell emerging-market assets and swap the proceeds into the global reserve currency. That has, in turn, strained dollar funding markets.

Spreads on Asian credit have surged from 189 basis points at the start of the year to as much as 432 basis points on March 23, according to the J.P. Morgan Asia Credit Index, which tracks actively traded U.S.-dollar denominated debt instruments in the Asia ex-Japan region.

The yield-to-worst on the index -- the lowest possible yield that can be received on a bond -- also climbed from 3.7% at the start of the year to 5%, and the data indicates waning investor appetite for such bonds. The index has also dropped to a one-year low in another sign of investor wariness.

Credit conditions in the Asia-Pacific region look tough going into the second half of 2020, and the demand shock resulting from national lockdowns is translating into an environment that is as "challenging" as the Asian financial crisis, S&P Global Ratings said in a report on Monday. "U.S. dollar borrowers and issuers with weaker credit profiles will find conditions increasingly difficult," it said.

The impact of the virus has been significant on many sectors, including auto, building materials, consumer discretionary, gaming, metals and mining, retail, transportation cyclical, and transportation infrastructure, the report said. As many as 47 issuers in Asia have been either downgraded or placed on negative credit watch, or both, or their outlooks have been revised downward. 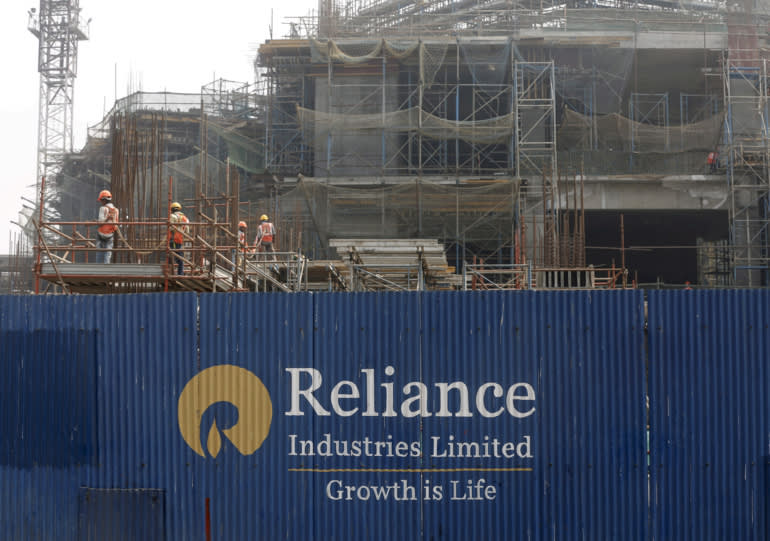 In India, offshore investors have been net sellers, with AAA-rated corporate bonds issued by the biggest companies -- such as Reliance Industries and State Bank of India, which have seen yields surge.   © Reuters

Some $1.4 trillion worth of U.S. dollar-denominated bonds are outstanding from Asian countries, with more than half of that from China, according to Dealogic. While that number includes quasi-sovereign bonds that come with an implicit state guarantee, it also counts property developers, such as China Evergrande Group and Sunac China Holdings.

Offshore bonds of Evergrande are yielding more than 20%, while Sunac is at 15%, as hedge funds and institutional investors offload the paper, increasing the cost of borrowing and refinancing.

China's property developers owe over $600 billion in bonds denominated in yuan and offshore currencies. Analysts expect defaults on some of these and a forced restructuring on others.

The trouble spots fan out to countries such as Indonesia, where companies with revenues in rupiah have funded themselves in the dollar market to capture the lower costs. That leaves them without a natural hedge, which an export-oriented company boasts.

With the rupiah at levels not seen since its 1998 nadir, any hedges that have been put in are "out of the money," said Nicholas Yap, a credit analyst at Nomura in Hong Kong. "High FX exposure, combined with upcoming maturities for some names, have led to severe weakness in the U.S. dollar bonds for these names," he said.

For issuers and investors, the scenario that is now unfolding is not new. Cracks have repeatedly appeared in this part of the market, including during the global financial crisis in 2008 and most recently when the U.S. Federal Reserve ramped up tightening in 2018. Red Cross workers spray disinfectant in Jakarta to prevent the spread of the coronavirus. Indonesia has introduced a policy that allows the central bank to intervene in the spot currency and derivatives markets.   © Reuters

These cracks have been repeatedly papered over as the dollar ceded ground and the market saw an increase of bond issuances by companies, which were emboldened by the fiscal strength of their governments. Foreign-exchange reserves in at-risk Asian nations -- such as India, Indonesia, Malaysia, the Philippines, South Korea and Thailand -- stand at nearly $1.5 trillion, according to data released by central banks.

That gives room for the countries to prop up their currencies and theoretically support the local debt market.

Analysts say emerging Asia should tread with caution as domestic debt markets cannot rival the dollar bond market. For instance, maturities in Indonesia over the next two years total nearly $20 billion or about a tenth of the entire local currency bond market, according to data from AsianBondsOnline.

Almost a third of the credit ratings in the Indonesian corporate sector -- excluding state-run companies -- carry a negative outlook, meaning a deterioration in their credit profile is likely within 12 months. Total U.S. dollar credit to nonbank borrowers as a percentage of gross domestic product stands at over 60% in Indonesia, Natixis said in a note.

In India, offshore investors have been net sellers, with AAA-rated corporate bonds issued by the biggest companies -- such as Reliance Industries and State Bank of India, which have seen yields surge by as much as 150 basis points, stock-exchange data shows.

Central banks of the two countries already have intervened, and analysts say that authorities will be constrained for fear of weakening their currencies further. The Reserve Bank of India has pumped in liquidity, while Indonesia has introduced a policy that allows the central bank to intervene in the spot currency market as well as the derivatives market.

"That just means the investor appetite for emerging market credit and assets will remain weak, which will make refinancing challenging," Tsui said. The immediate maturities at least aren't big, and with central banks in Asia boosting liquidity domestic markets, they will have to shoulder some of the responsibility."