Barings joins Deutsche Bank in looking to Singapore as alterative base

HONG KONG -- The number of foreign companies with offices in Hong Kong has fallen for the first time in 11 years, with a notable drop in financial firms, as concerns over social unrest and the city's political autonomy push businesses to consider other Asian hubs.

U.S. investment management firm Barings on Thursday said  it will open an office in Singapore to serve as its hub for Southeast Asia operations.

The exit of white-collar businesses marks a setback for Hong Kong, long a favorite destination for  global companies seeking an Asian base of operations, thanks to its low tax rates, English-speaking workforce, and the "one country, two systems" framework that granted the city a high level of autonomy following its handover to China from the U.K.

Recent unrest over China's growing influence, including a controversial and sweeping national security law enacted earlier this year, has led many overseas companies to reconsider the benefits of setting up shop in the city.

Barings is not the only financial company looking elsewhere. Deutsche Bank also began basing the chief executive officer for its Asia operations in Singapore instead of Hong Kong in August.

The number of nonlocal companies, including those headquartered on mainland China, with offices in Hong Kong  fell 0.2% from a year earlier to 9,025 as of June, according to a recently published annual survey by the Hong Kong government -- the first drop since 2009. The decrease expands to 2.8% when excluding mainland companies.

The foreign exodus was particularly stark in the financial sector, with 52 banks and financial companies and 24 insurers leaving the city. The Vanguard Group, The Motley Fool and others have also announced their exits from the city since June.

Barings said it has "nearly 100 professionals" in the city and the "Hong Kong office will continue to be our biggest office in Asia." Still, it is expected to shift some operations to its new office in Singapore. 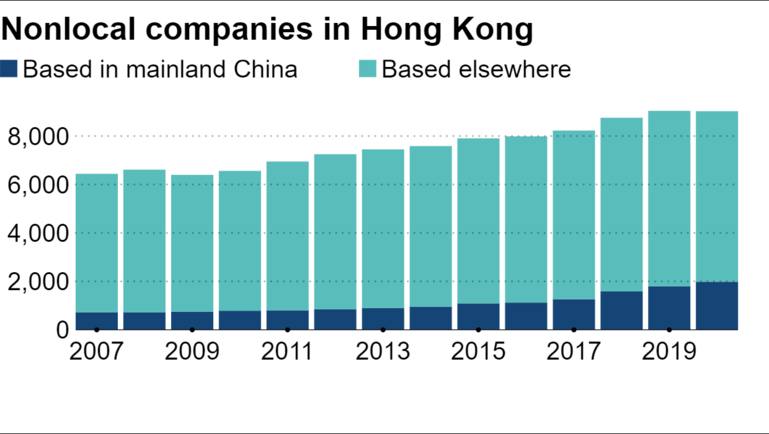 The trend is driven in part by China's new national security law for Hong Kong, which critics say has significantly curtailed freedom of speech in the city. Prominent democracy activists Agnes Chow and Joshua Wong were sentenced to prison here on Wednesday after pleading guilty to charges related to an unauthorized protest in June 2019.

"Foreign companies closely linked to Hong Kong should be aware that the perceived ‘martyrdom’ of the three young activists may cause reputational harm to their business interests beyond the territory,"  said British consultancy A2 Global Risk.

The risk of similar jailings "will add to the desire of many local residents with the transferable skills valued by international companies to leave the territory as soon as possible, often in order to protect their children," the firm added.

Mainland Chinese companies made up the largest portion of nonlocals still in Hong Kong, with their number increasing 10.4% to 1,986, according to the government data. But this rise was unable to make up for the decline in Japanese, U.S. and U.K. companies, which followed on the list with 1,398, 1,283 and 665 companies, respectively.

Confidence in Hong Kong's judicial independence and political stability waned from the prior survey.

The impact of the national security law on Hong Kong's judiciary has been a particular concern for businesses. In an August survey by the American Chamber of Commerce in Hong Kong, 39% of respondents said they would consider moving capital, assets or business operations out of the city at some point in the future.

Meanwhile, the number of mainland companies in Hong Kong has doubled in six years.

"After the national security law, Hong Kong went back to normal and stable," said Jonathan Choi, permanent honorary president of the Chinese General Chamber of Commerce in Hong Kong. "They will increase their investment in Hong Kong. Big SOE (state-owned enterprises) will continue to invest."

The Hong Kong government has also been wooing mainland companies to revive an economy squeezed by monthslong protests and the coronavirus. Hong Kong Chief Executive Carrie Lam in November announced subsidies for Chinese companies that hire Hong Kong residents on the mainland.