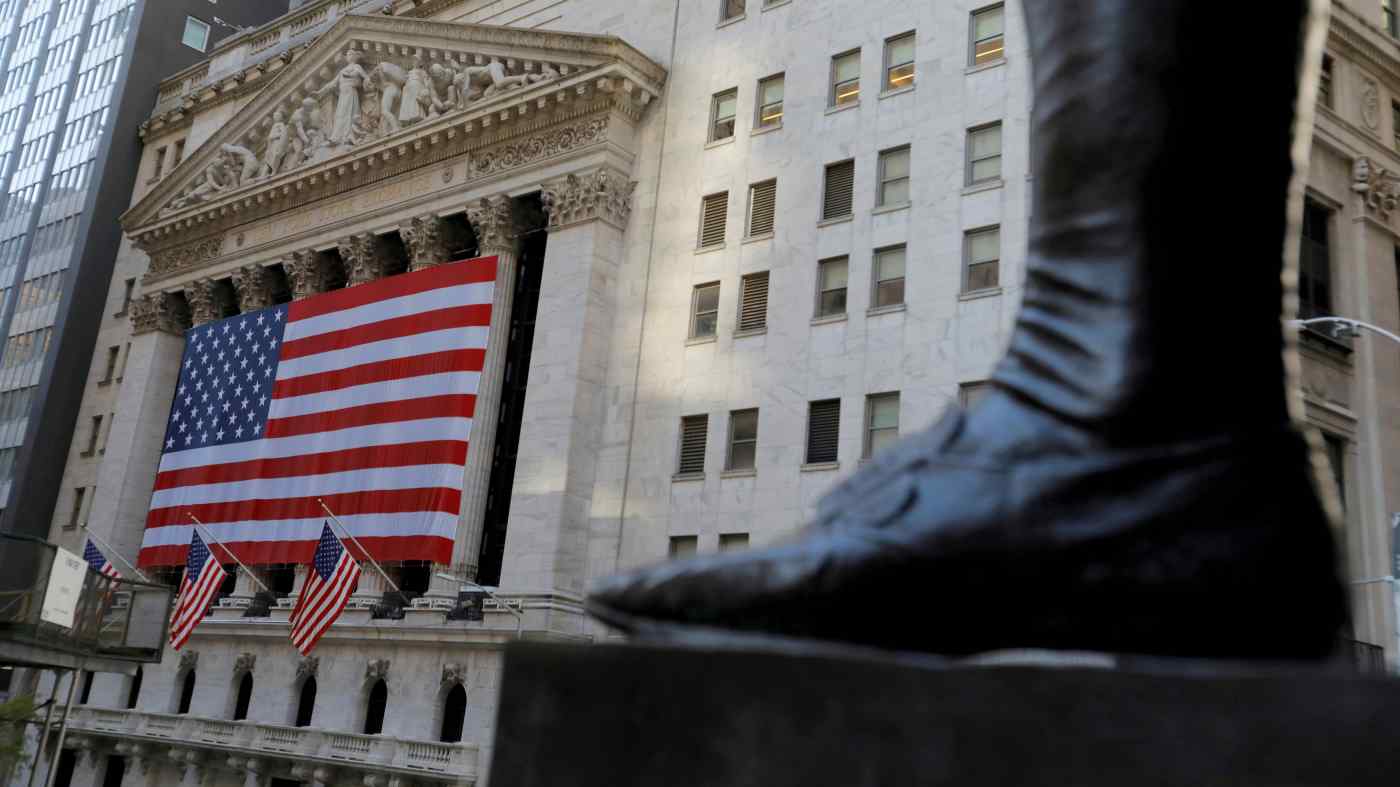 HONG KONG -- Global investment banks earned the most fees in a decade from equity offerings by Chinese companies over the past year, but they fear the revenue pool will diminish in 2021 amid moves by U.S. authorities to kick mainland corporations off American exchanges.

Non-Chinese banks netted $1.7 billion in fees during 2020 for arranging initial public offerings of Chinese companies in the U.S., Hong Kong and the mainland, the highest since a record $1.8 billion in 2010, data from Dealogic shows.

Two-thirds of the fees came from helping Chinese companies raise money on the New York Stock Exchange and the Nasdaq, a source of revenue that is on shaky ground as tensions mount between the world's two largest economies.

Officials at three global banks with operations in Hong Kong expect a decline of 10% to 20% in equity capital market fees from Chinese companies under a scenario in which Washington and Beijing remain at loggerheads over accounting access, with one saying that even a 30% fall cannot be ruled out.

The officials declined to be named because the projections are based on internal discussions. 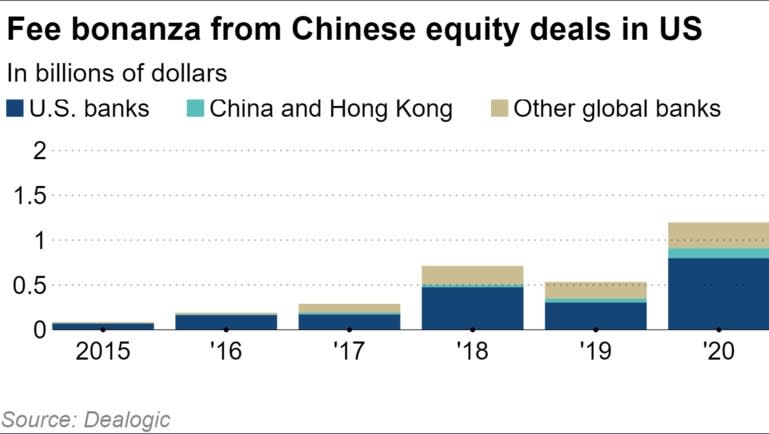 "Against all odds, the American houses did very well with China deals in the U.S. this year -- but it is doubtful whether this can be replicated going forward," said Philippe Espinasse, founder of consultancy P&C Ventures and former head of equity capital markets at Nomura.

"While some of these [financial] firms are now taking full control of their China joint ventures, they will face tough competition on the mainland, and, of course, IPO fees there are nowhere near the levels commonly seen on the NYSE or Nasdaq," he said.

It was a banner year for Chinese equity deals in the U.S. as companies -- including online real estate broker KE Holdings, backed by Tencent Holdings and SoftBank Group, and online wealth manager Lufax, backed by Ping An Insurance Group -- raised $38.1 billion on American stock exchanges. This was the most since 2014, but bankers say there already are signs of a slowdown on such deals.

While they expect Chinese equity deal volumes for the coming year to surpass the $270 billion raised in primary and secondary markets during 2020 in the U.S., Hong Kong and the mainland, they fear most of it will flow toward Hong Kong, Shanghai and Shenzhen.

Fees for greater China issues are as low as 1.5% compared with about 5% for U.S. exchanges, and global banks lag their mainland rivals in deals in the region, data from Refinitiv shows.

"The challenge of growing or at least matching the 2020 deal flow is dampening celebrations after a bumper year," a senior official at a global bank said.

"The deal flow this year was all about Chinese companies rushing in to raise capital in the U.S. before rules changed," the official said. "We know our Hong Kong business will be strong, but we can't show the same confidence for U.S. deals from Chinese companies." Chinese companies such as Alibaba Group Holding, JD.com and NetEase over the past year have raised capital in Hong Kong for their secondary listings. (Photo by Dean Napolitano)

At the heart of the concern is legislation passed by Congress and signed by President Donald Trump this month that would force Chinese companies to delist from American exchanges unless they comply with U.S. accounting rules.

The Holding Foreign Companies Accountable Act mandates that such Chinese companies give the U.S. Public Company Accounting Oversight Board full access to audited accounts. Beijing forbids such access on the grounds that the documents could contain state secrets.

The legislation is part of a push by U.S. authorities to curtail alleged unequal market access and national security concerns related to spying and technology supply chains. In November, Trump signed an executive order that prohibited U.S. investors from holding shares in companies believed to have connections to the Chinese military.

Given that the measures enjoy bipartisan support, bankers and investors expect the crackdown on China to intensify under President-elect Joe Biden, who will take office on Jan. 20.

If Beijing and Washington cannot agree on a path forward, mainland companies will be reluctant to offer shares in the U.S., and a spate of delistings would follow. Companies such as Alibaba Group Holding, online retailer JD.com and game developer NetEase over the past year have already raised capital in Hong Kong for their secondary listings.

As of Oct. 2, there were 217 Chinese companies listed on American exchanges with a total market capitalization of $2.2 trillion, according to the U.S.-China Economic and Security Review Commission.

The bulk of the fees from the so-called homecoming listings typically flows toward local banks and brokers, data shows. This past year, more than half the fees among the top 20 earners in Hong Kong were cornered by mainland banks, led by China International Capital Corp., CITIC Securities and Haitong Securities, data from Refinitv shows.

Goldman Sachs, Morgan Stanley, Bank of America, Credit Suisse and JPMorgan Chase earned a combined $760 million in fees for arranging Chinese equity deals in the U.S. this past year, according to Refinitiv. In comparison, the banks together netted $310 million in Hong Kong. Their share of equity deals on mainland exchanges is negligible.

Banks such as JPMorgan and Goldman Sachs seek to take full control of their ventures in China as equity capital market volumes in the country soar. However, the banks will have to take on well-entrenched Chinese players, and bankers expect a meaningful market share for the global financial firms only in a few years' time.

IPO volumes jumped 87% to 470.7 billion yuan ($72 billion) in China in 2020, driven by easing of rules for share offerings and investor appetite for large deals, according to EY. More than 800 companies have sought permission from the China Securities Regulatory Commission to list on mainland exchanges, it said.

The mainland market "had a deepened capital market reform ... amid China's focus to foster a multilevel capital markets system," said Louis Lau, partner at the capital markets advisory group of KPMG China. "This would further increase market inclusiveness and coverage, assisting companies of different sectors to meet their funding demands."