HONG KONG -- HSBC Holdings is evaluating acquisition opportunities in Asian wealth management in order to accelerate its pivot to the region, the company's chief executive said on Tuesday, after the U.K.-based lender reported that its first quarter profit surged.

Net income got a boost as the economic recovery from the coronavirus pandemic picked up pace and the bank clawed back funds set aside to cover potential bad debts.

"We are looking at opportunities at the moment, which are at different stages of evaluation," said Noel Quinn, the architect of the push into Asia that is aimed at addressing years of underperformance.

"The acquisitions will be primarily focused on building out product capability or distribution," he said on a media call after the company's results were released.

"We are looking not only in Hong Kong but in China and the rest of Asia, including Singapore and India. If we were to do acquisitions they will be bolt on, small portfolios of businesses." 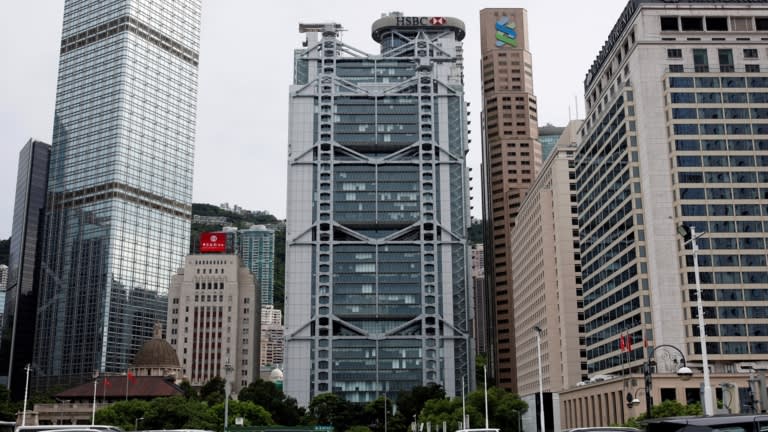 HSBC's headquarters in Hong Kong. As part of the bank's latest overhaul, it is relocating the heads of all its main revenue generating divisions to Hong Kong from London.   © Reuters

Chief Financial Officer Ewen Stevenson told Bloomberg Television on Tuesday that "very few" of Citigroup's retail banking assets in the Asia, which the U.S. bank has put up for sale, would be a "good fit" for HSBC.

The push into wealth management is the centerpiece of the bank's plan to deploy half of its capital -- the underpinning for its lending -- in Asia in the medium term as it seeks to bolster its fee-generating businesses to offset the lending-margin drag from low interest rates.

The bank is investing an additional $6 billion in wealth management to achieve "double-digit" growth in the region. It said that wealth balances in Asia surged 18% in the first quarter, with the lender adding 600 wealth managers, including 100 planners in China. Asian growth outstripped the bank's global increase of 3%, which took balances to more than $1.6 trillion.

The bank already has slashed $61 billion of the $100 billion targeted reduction of risk-weighted assets, freeing up capital that will be deployed in Asia, Quinn said.

HSBC reiterated that it is exploring "organic and inorganic options" for its U.S. retail network. It had previously said it would continue to focus on its wealth-management platforms in the world's largest economy.

A sale of its 150-branch U.S. business would end a 40-year attempt to run a full-service bank in America.

As part of the latest overhaul of the bank, which has 226,000 employees and operations in 60 countries and territories, the bank also is relocating the heads of all its main revenue generating divisions to Hong Kong from London.

HSBC said that first quarter adjusted profit before taxes rose 109% to $6.4 billion. The consensus estimate by analysts was $4.3 billion, as compiled by HSBC. Net profit climbed to $4.57 billion from $2.51 billion a year earlier, with both the U.S. and U.K. rebounding from previous losses and the markets business gaining from a surge in trading activity.

Asia remained the largest profit contributor, accounting for 60% of pretax profit, although earnings grew by just 2.7% in the first quarter from the same period a year earlier.

The strong gains came as the bank reclaimed funds previously allocated for potentially souring loans, rather than adding to its provisions, thanks to the improving economic outlook, which Quinn said would boost revenue. Lending is expected to rise in the "mid-single digit percentage" in 2021.

The COVID-19 vaccine rollout accelerating around the world is boosting the outlook for corporate and retail customer credit. That has eased the possibility of loan defaults, allowing banks to reverse provisions. HSBC lifted its global growth forecast for 2021 from 4.8% to 5.6%.

However, Stevenson said the bank was still "cautious." With loan moratorium for some borrowers expiring and a surge in the pandemic in some parts of the world, the bank has retained 70% of the buildup in its loan-loss reserves.

HSBC, which earmarked $8.8 billion on its books for bad debts last year, reversed $435 million of bad-loan allowances in the first quarter, as corporate and retail customers proved more resilient than expected.

HSBC shares in Hong Kong, which tumbled to a 25-year low last September, have climbed 13% this year. Its shares rose 2% on Tuesday to close at a one-week high of HK$46 each.