Interim CEO looks to tackle underperforming operations in US and Europe HSBC's overhaul plans will be announced Feb. 18, when it releases results for 2019. Analysts on average estimate that it will report pretax profit of $20 billion for the full year, little changed from 2018.   © Reuters
NARAYANAN SOMASUNDARAM, Nikkei Asian Review chief banking and financial correspondentFebruary 18, 2020 04:10 JST | Hong Kong
CopyCopied

HONG KONG -- HSBC Holdings is poised this week to unveil its third overhaul in a decade, a move that is seen leading to thousands of job reductions, a withdrawal from businesses and some global markets, and a reshuffle of the senior executive ranks as the U.K.-based lender searches for growth and ways to lift sagging returns.

Interim chief executive Noel Quinn, who aspires to run the bank full-time, in October flagged plans to pare down continental Europe and U.S. businesses that consumed too much capital but generated insufficient returns. Instead, he wants to redeploy in areas such as retail banking and wealth management in Asia, Canada and Latin America.

Details on the manner of the exits, the scale of the write-downs, the impact on earnings, and, finally, the jobs at risk have so far been sparse. Quinn, who was named interim CEO last August after John Flint was ousted from the position he held for less than 18 months, had previously promised to unveil full plans in February.

It is unclear whether HSBC will announce its decision on a permanent CEO this week, although Quinn has made clear that he wants the position.

"It is a pivotal moment for HSBC," said a London-based executive at a fund management company, which owns HSBC shares. "After years of restructuring and billions in costs, the bank has little to show in results, and the board realizes investor patience is wearing thin. I believe serious effort has been put in place for a big-bang overhaul." 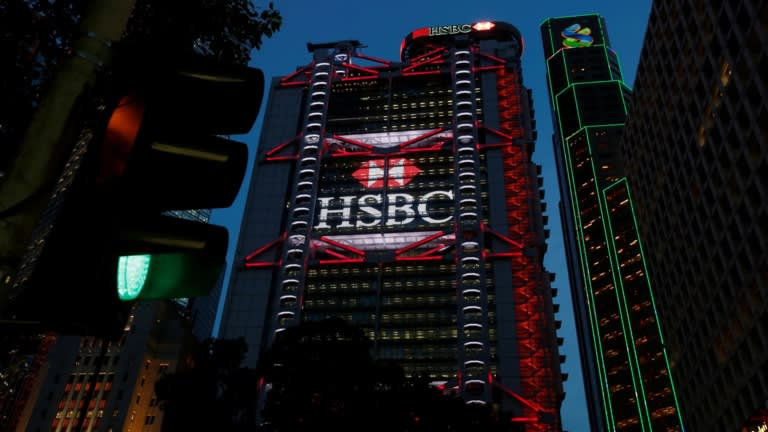 HSBC's offices in Hong Kong: The bank is expanding its wealth management services in China.   © Reuters

The executive is broadly supportive of the focus on Asia, especially China and Hong Kong, but cautions that the bank should avoid losing its global network and ensure proper execution of the plan because any missteps would undermine investor confidence. The executive also said HSBC should put to rest uncertainty over the CEO role, as the market had expected Quinn to have been confirmed as permanent CEO by now.

"It is a simple question of who leads the troops and takes ownership of the planned overhaul," the executive said.

The company's overhaul plans will be announced on Tuesday, when it reports results for 2019. Analysts on average estimate that HSBC will report pretax profit of $20 billion for the full year, little changed from $19.9 billion in 2018.

Mark Tucker, HSBC's chairman, has said that the search for a new CEO would take six to 12 months, and the board is looking for a candidate with experience in areas such as asset management and investment banking. The Financial Times earlier this month, citing people briefed on the plans, reported that HSBC would not name a permanent chief executive when it unveils a strategic overhaul this month and that the search was still in progress.

For investors, the idea of reshaping the bank is not new. The first attempt began about 10 years ago and accelerated soon after a money-laundering scandal that resulted in a $1.9 billion in fines. The bank later exited businesses and cut tens of thousands of jobs.

The second overhaul, which appears to be similar to the one expected this week, was unveiled in 2015. It, too, was a pivot to Asia, with the bank planning to reduce assets allocated to less profitable markets such as Europe and the U.S., and use the freed-up capital to bulk up in fast-growing Asian economies.

More than four years later, the bank's deployed capital has not moved much, underscoring the difficulty in reshaping a bank that employs roughly 238,000 people across about 65 countries and territories.

While the bank counts on Asia for more than 95% of its profits, about 45% of its capital still backs assets deployed in the U.S., Europe and the U.K. Asia accounts for just over 40% of the risk-weighted assets.

Group return on tangible equity, which stood at 10% in the nine months ended Sept. 30, would jump to 14% if the U.S. and European operations were removed, although a full exit is not possible given that HSBC benefits from its global network, an investor note by Goldman Sachs in December showed.

Among business units, Goldman Sachs analysts Gurpreet Singh Sahi and Yingqiang Guo in the note said they expected cuts largely in global banking and markets, which houses the investment bank and trading arms and the corporate center. They saw "modest" cuts in commercial banking.

Quinn, if he is named permanent CEO, hopes to have greater success than his predecessors by quickly shrinking businesses in the U.S. and Europe, or selling off units such as the company's French bank that is up for sale. He also hopes to cut the cost base by simplifying operations, although he has not given full details.

Both moves would involve job cuts, and HSBC has flagged that it expects to take "material" impairment charges. The bank in October abandoned its profitability target of achieving a return on tangible equity of 11% a year.

"Investing in Asia, especially in China and Hong Kong is the right move," Hao Hong, head of research at Bocom International, said. "It is a historic opportunity for Asia-focused HSBC to take the lead in China where the market is opening up. A bold strategic move by investing in the market now will send the right signal to investors and convince them to back the bank."