HSBC to expand restructuring with faster shift to Asia HSBC Holdings has indicated that it plans to grow its wealth business in Asia with a focus on China and also to expand across South Asia.   © Reuters
NARAYANAN SOMASUNDARAM, Nikkei Asia chief banking and financial correspondentFebruary 22, 2021 19:08 JST | Hong Kong
CopyCopied

HONG KONG -- HSBC Holdings is expected on Tuesday to unveil a renewed effort to push further into Asia and to relocate some top executives to Hong Kong as the bank accelerates its largest overhaul in decades to address years of underperformance.

With the U.K.-based bank's business recovering in the fourth quarter, CEO Noel Quinn is hastening a plan unveiled a year ago that called for cutting 35,000 jobs, about 15% of its total, over three years.

The bank has flagged that it plans to grow its wealth business in the region with a focus on China and to also expand across South Asia.

HSBC, which received 54% of its total revenue and nearly all its profit from Asia in the first nine months of last year, is expected to report on Tuesday that its pretax adjusted profit fell to $11.7 billion in 2020 from $22.2 billion a year earlier, according to an average of 19 forecasts published on the bank's website, hurt by a surge in loan-loss provisions in the wake of the coronavirus pandemic.

The bank's shares in Hong Kong, which tumbled to a 25-year low last September, have climbed 14% so far this year -- outpacing gains for the benchmark Hang Seng Index. Its shares have received a boost from bets that the lender will reinstate dividends, which it suspended last year for the first time in 74 years under pressure from British regulators due to the pandemic. 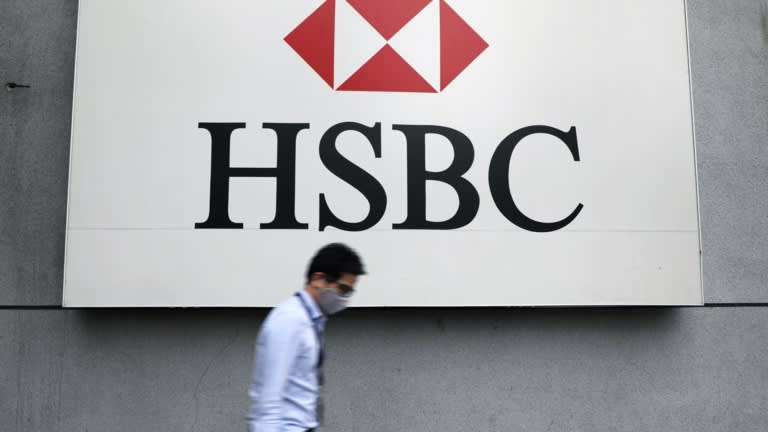 The main part of HSBC's restructuring unveiled last year involved cutting its investment banking unit's risk-adjusted assets by around 35% in Europe and 45% in the U.S.   © Reuters

Quinn has vowed to release details of the bank's plan, which is expected to promise investments in new products in Asia -- particularly in the wealth management, and markets and trade finance businesses. He also will release medium-term financial targets: Investors expect the bank to report its first rise in after-tax profit this year since 2018.

"A smart manager would focus on the growth opportunity in Asia, and particularly in China," said Hao Hong, head of research at BOCOM International in Hong Kong. "HSBC's Quinn has chosen the same path as well and is speeding up efforts to capture the opportunity. Asia promises a better future for the bank."

The three executives head businesses that contributed to nearly all of the lender's revenue in the first nine months of the year. The expected relocations were reported first by Bloomberg. A spokeswoman for HSBC declined to comment.

"HSBC has accelerated restructuring in the fourth quarter and we expect further updates," said Yafei Tian, a Citigroup analyst in Hong Kong. She expects HSBC's focus to be on "pivot to Asia, pivot to wealth and digital."

The main part of the restructuring unveiled last year involved cutting its investment banking unit's risk-adjusted assets by around 35% in Europe and 45% in the U.S. The sales, trading and equity research operations were to be shrunk in Europe and the structured products unit moved from London to Asia.

The Financial Times reported on Monday that the bank plans to scrap its money-losing 150-branch U.S. retail network, ending a 40-year attempt to run a full-service bank in America.

Quinn's push to galvanize his 12-month-old plan comes as the global economy is recovering from the pandemic, with the pressure on its corporate clients and retail customers easing. Loan defaults have been lower than initially forecast, allowing the likes of HSBC to claw back some of its provisions.

In August last year, the lender had forecast that loan-loss provisions could climb to as high as $13 billion. Just two months later, however, it said the figure would be closer to the lower end of the forecast range of $8 billion to $13 billion.

When first unveiling the pivot to Asia in February last year, the bank also said it planned to slash $4.5 billion in costs by reducing geographic reporting lines, consolidate back and middle offices, reorganize the head-office structure and shrink its asset size by as much as $100 billion, which would free up capital that could be deployed in Asia. In October, HSBC said it expected to exceed those targets.

Chairman Mark Tucker said at the Asian Financial Forum last month that the financial hit the bank took from the pandemic had added urgency to its restructuring plan.

The bank is expected to set aside $9.07 billion to cover loan defaults in 2020, or more than triple the level of the previous year, according to a consensus estimate of analysts.