The financial district of Pudong in Shanghai. Offshore funds that lack a presence in China are forced to rely on accounting and law firms to scour through transactions in one of the most opaque markets in the world.   © Reuters
NARAYANAN SOMASUNDARAM, Nikkei Asian Review chief banking and financial correspondentFebruary 17, 2020 15:16 JST | China
CopyCopied

HONG KONG -- Foreign fund managers eyeing the $1.5 trillion Chinese distressed debt market are put off by high accountant and lawyer fees, which can be five times that of other regional markets. Such high fees are preventing them from entering the market and instead continue to focus on attractive investment bargains elsewhere in Asia.

As China opens up to foreign investment in an attempt to clean up its bad debt crisis after trying to do it domestically for two decades, three distressed fund managers that the Nikkei Asian Review interviewed say intermediary fees can be as high as 15% of the value of a transaction compared with 3% to 5% in other markets, such as India, Japan and South Korea.

Such high fees constrain returns for fund managers, as they typically work with an unleveraged return assumption of 15% for a transaction. With a 50% leverage, returns can increase by another five to 10 basis points, they say, but so does risk.

SC Lowy, a Hong Kong-based $2 billion investment firm is one. The investor prefers to tap opportunities in China by investing in distressed paper found offshore. Two other funds that manage $5 billion and $3 billion, respectively, have come to a similar conclusion after taking a look at opportunities over the past two years. The two fund managers declined to be named.

"The market is huge, opaque and demands a huge commitment," Soo Cheon Lee, chief investment officer at SC Lowy, said. "We think investors will have to invest in a local platform, build up staff across functions -- from investment, research, accounting and legal -- to succeed [in China]. Without a platform, one has to rely on third-party providers, and the cost is exorbitant." 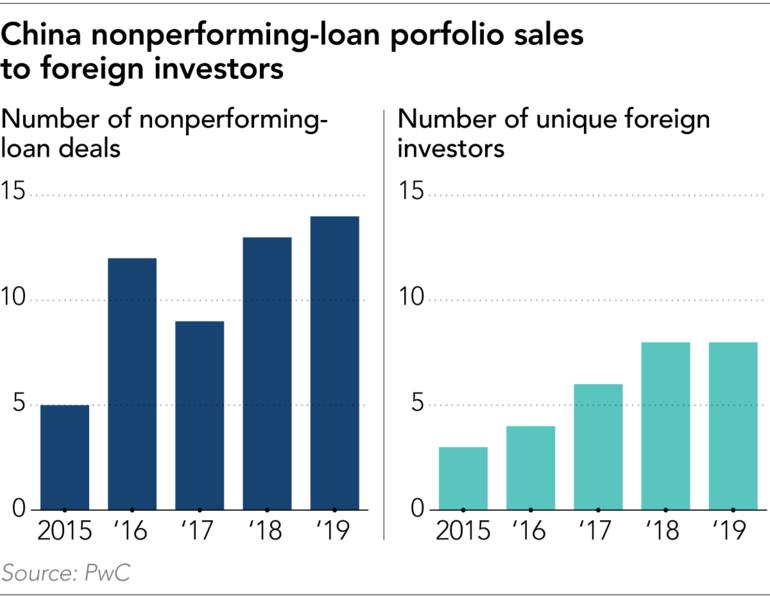 Offshore funds that lack a presence in China are forced to rely on accounting and law firms to scour through transactions in one of the most opaque markets in the world.

While fund managers acknowledge that China could be the biggest global market for distressed debt -- and one where large funds such as Oaktree Capital Management, Loan Star Funds, Goldman Sachs and Bain Capital already have a foot in the door -- the challenges can only exacerbate with the market opening up.

Beijing's recent phase one trade agreement with Washington paves the way for U.S. financial-services companies to apply for asset management licenses that put them on par with their Chinese peers when it comes to buying distressed debt. Once an asset management license is granted, U.S. firms can directly buy nonperforming-loan portfolios from banks and bypass the Chinese companies that currently act as middlemen.

That can lure more players such as Nomura Holdings, which over the past 24 months has built up a China debt investment team. That, in turn, can push up the demand for intermediaries, fund managers say.

"If we put it in perspective of the investment life cycle, the first phase is evaluating the investment opportunity for which we need to hire third-party professionals -- legal counsel and accountants -- who are familiar with the local situation and can assess the risks involved," said Hong Kong-based Jason Wu, a vice-president in Nomura's loans and principal investments team in Asia ex-Japan.

"Sometimes the fees in China can be higher, but that is subject to the scope of work in China, which tends to be larger and the situation more complicated," he said.

Fund managers say they need the expertise of local accountants and lawyers through the three- to four-year life cycle of a transaction -- from purchase to exit in China. And when the underlying business or collateral lies outside the country's main cities, the reliance on such advisers jumps. Fund managers need to engage up to 10 lawyers for certain portfolios, and that increases the complexity and costs.

While that level of complexity and costs eventually evens out for large investors who have an appetite for distressed loan books of about $100 million, the impact is considerably larger on smaller funds that deal in the market with a portfolio size of $50 million or less. Shanghai's Pudong financial district. An investment executive says that one way to negotiate a better fee structure is to demonstrate the intention of developing a long-term relationship with accountants and lawyers.   © Reuters

"Investors prefer loan books secured by first- and second-tier city assets as these are in comparatively transparent and liquid markets," Savills Research said in a note in December. "However, it is difficult to find any portfolios at a big enough discount to market to justify the risks. This is especially true for international investors who will benchmark risk-weighted returns in China against other markets, some of which also generate 15% plus internal rate of return."

A lot of deal sourcing and processing rely on relationships that could be more problematic for international investors, Savills said.

One Hong Kong-based fund manager with a U.S.-headquartered investment firm who looked at several deals last year explained the challenges. After spending months on a potential transaction and dealing with multiple intermediaries, the fund manager, who requested anonymity, realized the fees kept mounting. Even though the executive was convinced of the potential of the deal, the transaction had to be abandoned.

"The loan portfolio in question was centered on an eastern province and given it would have been our first deal in the mainland, our investment committee wanted foolproof due diligence," the fund manager said. "While documentation in China has vastly improved, it is still not on par with other markets, and we realized we needed hand-holding not just for buying the portfolio but after that, too."

One way to negotiate a better fee structure is to demonstrate the intention of developing a long-term relationship with accountants and lawyers rather than a single-deal based one, says Wu of Nomura.

"If you want to create a deal-based service relationship, service providers' charges may not be cheap," he said. "However, if two parties want to develop a long-term business relationship and strive for long-term success, a service fee mechanism can be created which is beneficial for both parties."