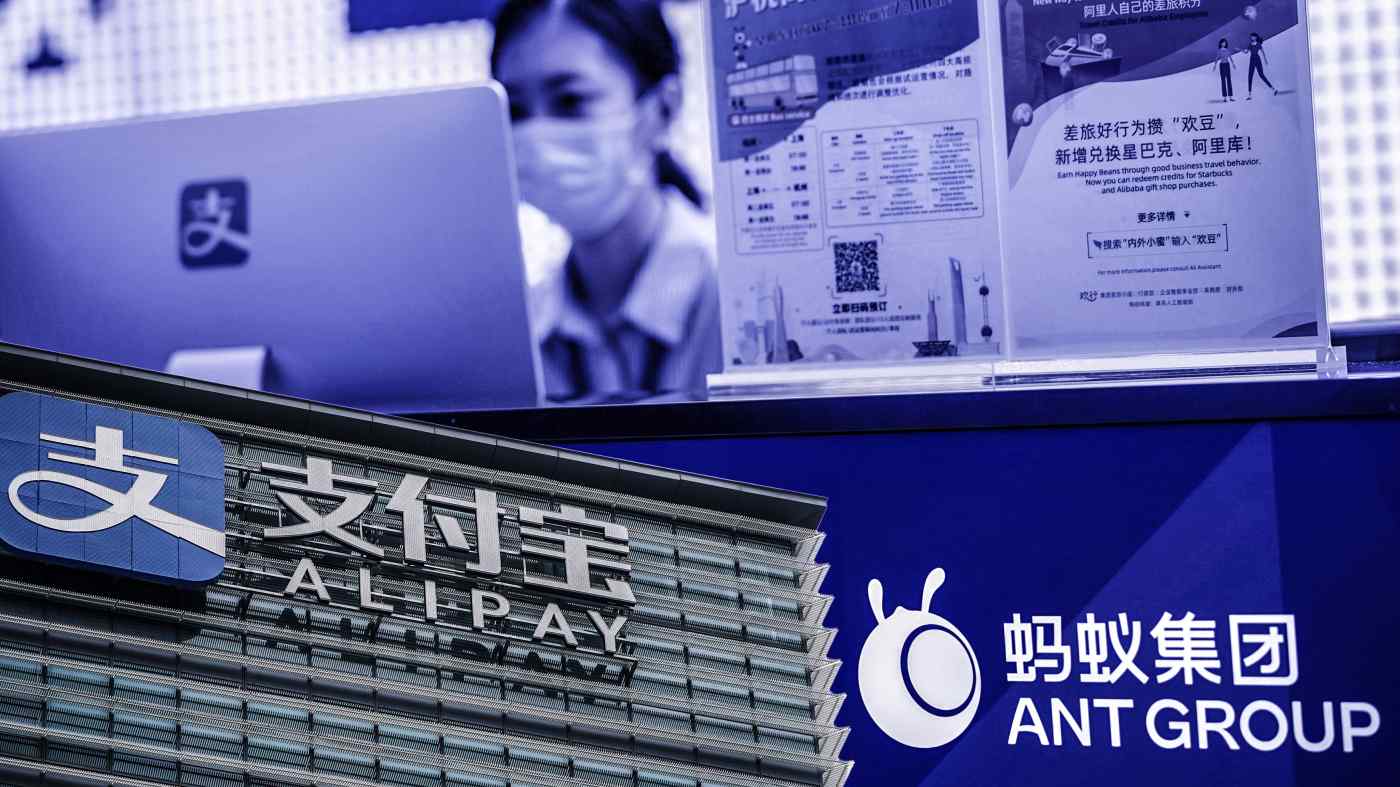 Ant, which is preparing to raise a maximum of $39.6 billion in the world's largest IPO, controlled 55% of China's $29.9 trillion mobile-payment market in the first quarter of 2020. (Source photos by Reuters)
YUSHO CHO, Nikkei staff writerNovember 2, 2020 11:54 JST | China
CopyCopied

SHANGHAI -- Ant Group has built a financial empire unparalleled in the world by taking advantage of the pools of data and funds it has built up through digital transactions on online retail and payment services platforms linked to Alibaba Group Holding.

In the lobby of Ant's headquarters in Hangzhou, in China's eastern Zhejiang Province, an A4-size sheet of paper displays the words: "757 yuan received through Alipay, Oct. 15, 2003," a reference to the financial technology company's popular mobile-payment platform.

The sign is a printout of an Excel spreadsheet that recorded Alipay's first transaction, the sale of a digital camera on Taobao -- one of Alibaba's online retail websites -- by a Cui Weiping, who was studying in Yokohama, Japan.

Alipay, which started as a Chinese version of PayPal, initially relied on human workers using fax machines and telephones for communication with banks and users. The company solidified its position as smartphones came onto the market.

Ant, which is preparing to raise about $34.5 billion in the world's largest initial public offering -- rising to up to $39.6 billion if overallotment options are fully exercized -- almost solely handles payments and fund transfers for the "Alibaba economic bloc," made up of its 1 billion users. Its only rival is Tencent Holdings. 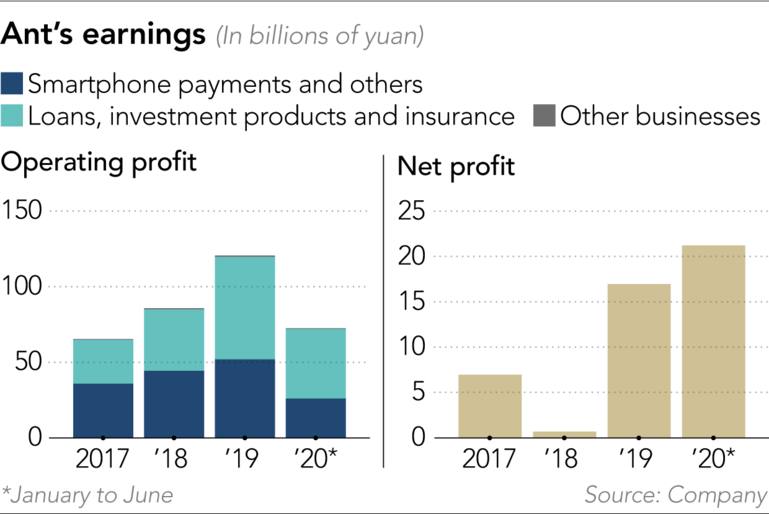 But the Alipay service, Ant's initial business, is no longer the leading earner for the company, which is expected to list its shares simultaneously on the Shanghai and Hong Kong stock exchanges on Nov. 5.

Ant's artificial intelligence system automatically sets credit limits and interest rates, and credit decisions are made using an "all usage history" of services from Alibaba, which owns about a third of Ant.

Ant enjoys a low loan delinquency rate of roughly 1% to 2%, thanks to huge amounts of data collected due to its position as a major online fintech platform and its use of artificial intelligence.

"In the old days, unsecured credit for individuals had to have a delinquency rate of 10% or lower to be profitable," an executive at a consumer credit company noted. Daniel Zhang, chairman and chief executive officer of Alibaba, once said the group aimed to record every human behavior in digital data.

Ant checks its users' credit profiles down to details such as whether a potential borrower has paid utility and phone bills on time.

That serves as a reminder of the company's strategy: Daniel Zhang, chairman and chief executive officer of Alibaba, once said the group aimed to record every human behavior in digital data.

Many customers in China willingly offer personal information, such as details on properties and automobiles they own, and even their employers and annual income, in an attempt to boost their credit scores in Ant's Zhima Credit system, previously known as Sesame Credit.

In China, mobile-payment accounts have to be linked to government-issued identification numbers and bank accounts. Without privacy protection measures in the country, people seem happy to voluntarily disclose personal information.

Still, Ant's strong position in fintech and artificial intelligence do not explain the full picture of why it achieves high profitability.

Of Ant's loans to individuals and very small businesses, 98% are separated from its balance sheet. It had 2.1 trillion yuan in outstanding loans as of the end of June, while its assets totaled just 315.8 billion yuan.

There are two reasons for that. The first is the use of securitization. Many small loans bear interest rates of between 0.03% and 0.04% a day, which translates to about 10% to 15% annually.

According to a prospectus for a securitized product in December 2019, its senior tranche carried an annual interest rate of 3.62%.

Even though these loans can be repaid at any time and, hence, their balances decline gradually, Ant can secure ample interest margins at the time it issues securitized products. But there is another reason. Ant acts as an intermediary for financial institutions and earns fees out of that. The company's partners are now the ones providing most of the financial services it offers app users.

The situation is similar with microfinancing and consumer lending. Ant originates loans, 98% of which had been underwritten by roughly 100 partner financial institutions as of the end of June, with Ant collecting service fees. With insurance, Ant's platform generated 52 billion yuan in premium sales for 90 partner companies.

The bad-debt ratio of online lender MYbank, an Ant affiliate, stood at 1.3% at the end of 2019, lower than the average figure of just under 2% for China's commercial banks.

That performance is a testament to Ant's strength in its ability to use artificial intelligence to analyze all transactions related to Alibaba, such as through Alipay, and use it to produce credit scores.

Ant has been able to boost its outstanding balance of loans to 2.1 trillion yuan in less than 10 years since it started the lending business: Borrowers are not limited to residents in urban areas. A wool processing factory in Hebei province. Li Benlai bought more than 100 tons of wool, using hundreds of thousands of yuan borrowed from MYbank to partly finance the purchase.

In the town of Liulin in Hebei Province, 370 kilometers southwest of Beijing, where wool processing has developed into a core industry, Li Benlai, 39 years old, bought more than 100 tons of wool from the Inner Mongolian Autonomous Region, using hundreds of thousands of yuan borrowed from MYbank to partly finance the purchase.

If the loan is paid back within four months, Li can chalk up enough profit after such payments as wages to part-time workers. Li said he holds down borrowing, despite an ample credit line, due to limits on his processing capacity.

Meanwhile, in the mobile-payment market where Ant and Tencent are competing head-on, fees have stayed at the world's lowest level of no more than 0.6%.

Qi Hengxing, 29, who has an office in a Shanghai suburb and sells auto parts on Tmall, said Ant has halved the interest rate it charges him and raised his credit line to 2.8 million yuan from 2 million yuan thanks to its campaign prior to "Singles Day," Alibaba's biggest annual shopping event held on Nov. 11.

The campaign was a boon for Qi, who was struggling with sluggish auto sales amid the coronavirus pandemic.

His interest rate has dropped to 0.02% a day, though for a limited time. With Tencent's WeBank also offering loans to small-business operators, Ant's promotion reflects its resolve to prevent the flight of customers.

While Ant analyzes loan applicants' purchasing histories on Alibaba to check their creditworthiness, Tencent is reportedly using data from its WeChat platform for the same purpose, analyzing texts and conversations on the social networking site to shut out fraud and crime-syndicate members.

Ant is no doubt a disrupter in China's account settlement and money transfer services. But the country's financial-sector order -- backed by the Communist Party, the government and state-owned banks -- stays firm due to the remaining presence of the regulation of interest rates.

The central bank, which is part of the government and in turn controlled by the Communist Party, still sets prime lending rates. The interest rate difference with commercial banks' one-year deposit rates is about 2 percentage points, which guarantees a certain level of profits for lenders.

As Ant prepares for its dual stock listing, it remains to be seen whether the company will take advantage of its IPO to continue growing or be drawn into bitter competition with copycats and followers.