MUMBAI -- India is planning new measures to clarify a landmark corporate bankruptcy law that was meant to bring the nation's largest corporate borrowers to heel, amid complaints it has become a "mockery of justice."

The law giving more power to creditors was one of the Modi government's signature reforms, but five years after it came into effect, banks are still taking big losses in bankruptcies and the debt resolution process has been plagued by delays and legal uncertainty.

Now, with a wave of defaults that need to be resolved after India's COVID crisis, there are fears that judges could become even more overwhelmed.

"The IBC has more or less collapsed," said Nishit Dhruva, managing partner of law firm MDP & Partners, which advises banks on bankruptcy matters, using the abbreviated name of the Insolvency and Bankruptcy Code of 2016. "Due to several factors, such as a lack of judges and litigation by former owners, it appears that the entire IBC process has now become a mockery of justice and needs to be streamlined before it becomes a complete failure like the insolvency regime that was in effect prior to the IBC."

The 2016 reform was a major plank of Indian Prime Minister Narendra Modi's plans to reform the banking sector and bring its spiraling bad debts under control. For decades, banks had complained that powerful companies were able to routinely skirt their payment obligations by tying creditors up in the courts.

The new code was designed to tip the scales in banks' favor by allowing them to sack the board of the defaulting company and appoint an independent monitor to oversee a speedy auction of the company to the highest bidder, to maximize recoveries. At the same time, banks were required to make provisions against bank loans to cover likely losses.

Nonperforming loans are down to 8.2 trillion rupees ($111 billion), or 7.5% of gross lending, from a peak of 10.36 trillion rupees in the fiscal year ending March 2018, when they accounted for more than 11% of all loans advanced. But the decline has largely been due to write-offs, together with a government recapitalization of the banking system. The latest government data shows that the insolvency resolution process is more likely to lead to a liquidation of a company than any other outcome, likely the worst result for creditors.

Of the cases closed under the IBC so far, 47% ended in the company being wound up, versus 14% that were resolved with a sale. In the rest of the cases, banks settled with the owners and handed the companies back to them or are still litigating in the courts. The Indian government says the IBC has helped cut the length of the average bankruptcy case in half, to less than two years. But only a minority of cases are completed in the 180 days stipulated in the code.

The Insolvency and Bankruptcy Board of India records that, even for cases resolved with a sale, creditors recovered 36% of what they were owed. Only a few good assets, like Essar Steel and Bhushan Steel, attracted buyers as going concerns. Lenders to consumer electronics maker Videocon Industries were set to recover 5% of a 648 billion-rupee debt following approval of a bid of 30 billion rupees from billionaire Anil Agarwal, though they are now seeking to redo the bidding process after criticism by the courts.

A committee of Indian members of parliament last month produced a weighty report detailing the shortcomings of the IBC and recommended a thorough evaluation of the code.

"The low recovery rates, with haircuts as much as 95%, and the delay in resolution process, with more than 71% cases pending for more than 180 days, clearly point toward a deviation from the original objectives of the code intended by parliament."

The panel bemoaned a shortage of bankruptcy court judges and asked the government to appoint more -- including those with High Court experience -- to improve the quality of judgments and limit the risk they can be challenged.

Long delays in taking up a bankruptcy petition have potentially serious consequences for creditors as the company remains under the control of the defaulting owner, making it possible for them to shift funds and assets around to shield them from creditors. The panel has suggested giving the courts a 30-day deadline to admit cases and that companies be immediately handed over to a resolution professional.

"The courts will need to ensure that resolutions are not delayed on account of frivolous challenges or challenges to settled positions of law," said Ajay Shaw, partner at DSK Legal, a law firm specializing in bankruptcy cases.

There have been other complications. A lenders' panel known as the Committee of Creditors has made decisions that later failed to pass judicial scrutiny, delaying the entire process and angering the courts.

Several owners of bankrupt companies have litigated all the way up to the Supreme Court over the interpretation of the IBC, about whether they can bid for their companies via the resolution process. The matter was finally settled in favor of their being allowed to bid -- provided no other companies in the same group are in default and 90% of the lenders agreed to the settlement.

The parliamentary panel's report also points out that potential suitors for troubled companies have been able to make unsolicited bids outside of the formal resolution process. In many cases, after the banks selected the highest bidder, fresh suitors suddenly emerged with better offers, creating procedural uncertainty, the panel said. Genuine bidders are discouraged from bidding at the right time. 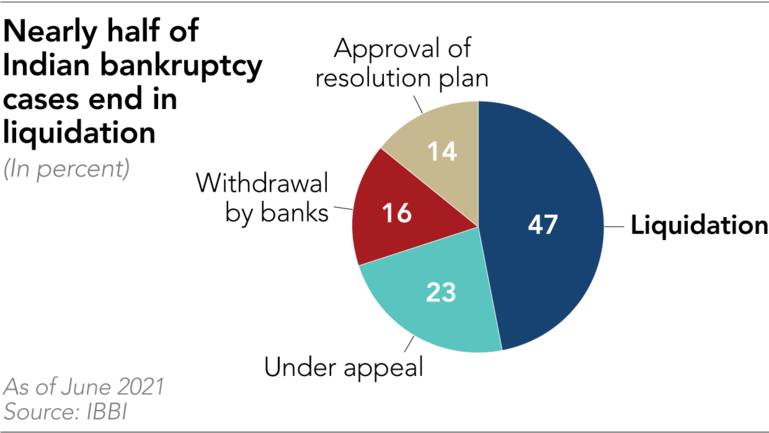 The Indian government has already started consulting stakeholders with a view to bringing clarity. The corporate affairs ministry, finance ministry and other regulators plan to come out with a code of conduct for the Committee of Creditors for selecting the winning bidder in a resolution.

The issue is urgent because the IBC system is likely to face even more stress in the months ahead. The Reserve Bank of India has warned that business disruptions and COVID-induced uncertainties will hit the banking system's asset quality in the coming months. The gross nonperforming asset ratio across all Indian banks may increase to 9.8% by March, the RBI said, and may further increase to 10.36% and 11.22% under medium stress and severe stress scenarios.

Rating agency Care says the government has taken several steps in the past to reduce bad debt but additional structural reforms are needed to address the problem. "These structural reforms include bank capital infusion, better governance, and loan underwriting, monitoring for early warning signs of distress, creating a secondary market for bad loans for better price discovery, and faster implementation of IBC," Sanjay Agarwal, Senior Director of Care Ratings, said in a note.

The Indian government had suspended the ability to start insolvency proceedings against defaulters for a year from March 2020 due to the pandemic, and the RBI allowed a moratorium on loan repayments, but the process has now reopened.

Some think a code of conduct and a raft of new judges might not be enough to improve the law and that other changes are needed.

Earlier this year, the government introduced a "prepackaged" bankruptcy process similar to those prevalent in other countries, under which banks and borrowers agree to a financial settlement before the courts get involved, only approaching a judge to obtain approval. This system is so far only for small and mid-size enterprises, however.

"The outcome of recently introduced prepackaged insolvency for small loans may hold the key to the future direction of IBC," said Hari Hara Mishra, director of UV Asset Reconstruction Company, a distressed debt investor. "It's time to make some urgent changes."