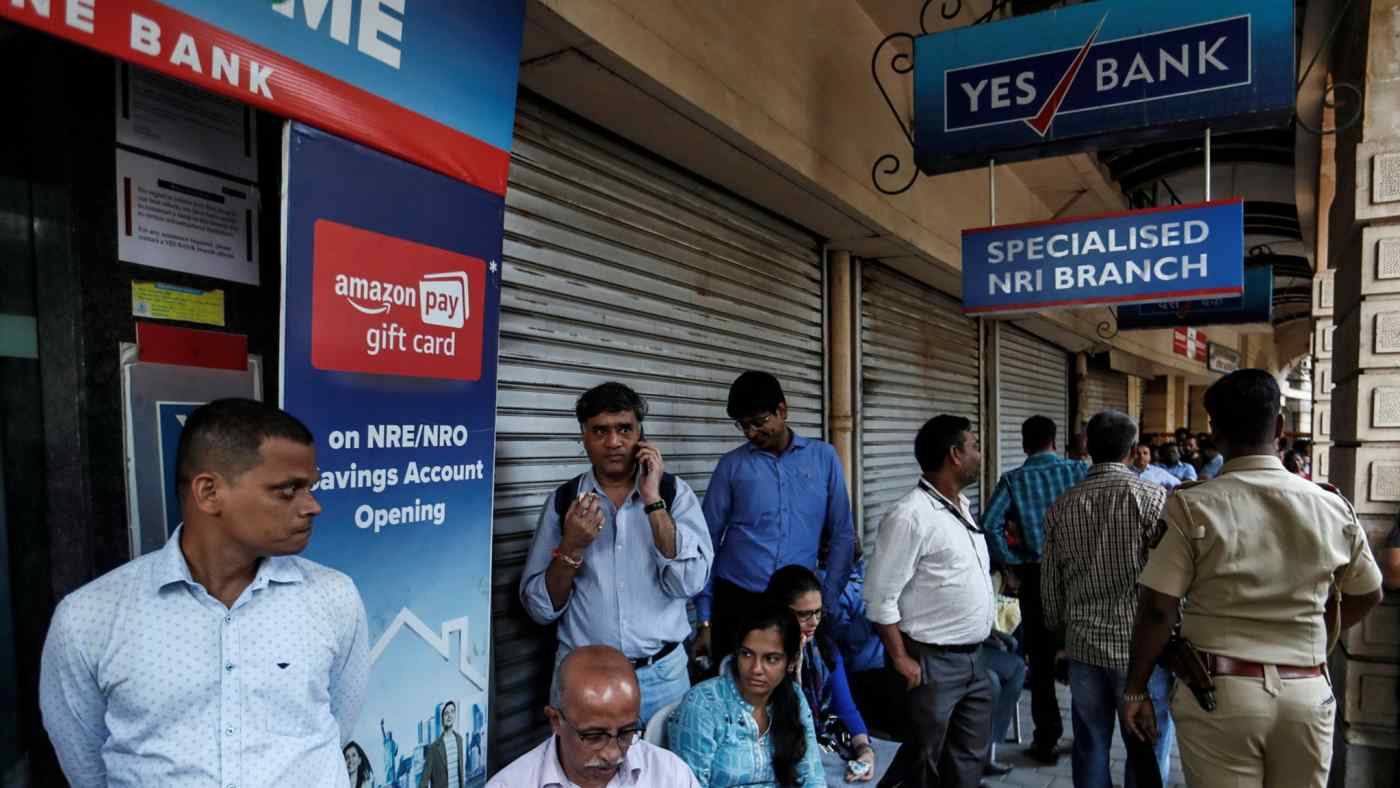 NEW DELHI -- India's troubled Yes Bank has resumed operations after a coordinated intervention meant to prevent a run on the private-sector lender.

Many customers still complained of difficulties in accessing their accounts Thursday, though there were no reports of panic surrounding the bank's rescue by public-private consortium.

"Our banking services are now operational," Yes Bank said in a tweet Thursday, adding that it would offer extended hours. The central bank lifted its moratorium on the lender the previous evening.

The situation provides a test of the ability of India's government and regulators to handle rising financial-sector risks as bad loans mount in a slowing economy.

On March 5, the Reserve Bank of India stepped in and capped withdrawals at 50,000 rupees ($670) at Yes Bank, owing to the private lender's inability to raise capital buffers against potential nonperforming loans.

Prime Minister Narendra Modi's cabinet on March 13 approved the bank's reconstruction plan, under which the government-run State Bank of India is to take an equity stake of up to 49%. Private-sector investors that have come forward to join the SBI-led consortium include HDFC Bank and ICICI Bank. The new Yes Bank board, which will include two SBI directors, is to take charge on Mar. 26.

After the moratorium was lifted at 6 p.m. Wednesday, Yes Bank customers took to Twitter complaining that they were still unable to access mobile and internet banking or withdraw money from kiosks. The bank acknowledged that it was facing an intermittent problem and trying to solve them.

Swati Sharma, 27, a New Delhi-based public-sector worker, said she has her salary account in Yes Bank, but she has now requested her employer to deposit her pay to a government-run bank.

"It was days before the moratorium on Yes Bank was lifted that we were given this option to shift our salary account to some other bank, which I decided to accept," she told the Nikkei Asian Review. "However, my Yes Bank account is also linked to my monthly car loan installments for the next three years, so I'll not close it permanently and keep only as much balance as required for paying the installments."

Sharma said she had seen no panic among Yes Bank customers as the revival plan that the RBI and the government has put in place looks sustainable.

Himanshu Pathak, 50, another customer of the bank, said he would prefer to withdraw all his money.

"I had not kept much of my funds in Yes Bank. However, I have now decided to take out my money from there and close my account," said Pathak, who stayed away from visiting his local branch on Thursday, owing to fears about the coronavirus. "I'm avoiding crowded places nowadays, so I'll go to my branch after a few days."

Others echo Pathak's views. According to a Twitter poll commissioned by financial news portal Moneycontrol on Wednesday, a majority of the Yes Bank customers -- 52.5% -- said they would withdraw all their money.

RBI Gov. Shaktikanta Das on Monday described the coordinated moves by the government, the Finance Ministry and the central bank as "a very swift and fast action -- perhaps a record of sorts."

Das called the Yes Bank restructuring plan "very credible and sustainable," and said it was the first time in India for a private bank to be rescued by a public-private partnership.

Earlier failed banks used to be amalgamated with a larger entity, but this time the identity of the bank in difficulty is retained, Das said, assuring all depositors of Yes Bank that their money "is completely safe and there is no reason for any undue worry [or] rushing into withdrawing their deposits."

Finance Minister Nirmala Sitharaman said Yes Bank's authorized capital "had been raised from 11 billion rupees to 62 billion rupees so that we can accommodate immediate and subsequent raising of capital requirements."

Analysts say it was too early to conclude that the RBI had succeeded in containing panic among depositors, though the central bank went all out to allay concerns.

"It is hard to say [as] they lifted the moratorium in the evening [on Wednesday], so it's barely been a few hours since then," said Saswata Guha of Fitch Ratings. "But my sense is that the amount of effort the RBI has put in explaining depositors through its commentaries [or news conferences] it is possible that to certain extent we can say the containment has been averted."

Meanwhile, the government's efforts toward improving the financial health of the country's lenders may be gauged from the reduction in the public sector banks' nonperforming assets, which have decreased from 8.96 trillion rupees, or 14.6% of total assets, in March 2018 to 7.17 trillion rupees, or 11.3%, in December 2019.