Tokyo and Singapore could emerge as alternative regional financial hub TOKYO -- The growing integration of Hong Kong with China has increased the importance of the territory as a gateway to the world's second-largest economy, but those who want to invest across the rest of Asia are being forced to consider alternatives.

Singapore and Tokyo are among the obvious candidates to possibly replace Hong Kong as Asia's financial hub and both cities are keen to win that title, setting the stage for intense competition to attract investors.

Hong Kong, a former British colony, has long had competitive strengths as a regional financial center, including a British-based legal system, low tax rates, the English language and openness to human resources from both China and overseas.

But following the imposition of a Chinese security law there earlier this year, concerns are rife about "big threats to Hong Kong" in the areas of degradation of the rule of law, quality of life and freedom of expression, Kurt Tong, a former U.S. consul general to the territory, said at the Nikkei Virtual Global Forum on Wednesday.

Investors were reminded of Hong Kong's changing role when its stock exchange announced the postponement of the initial public offering of Ant Financial, a Chinese financial technology giant, just two days before the scheduled date of Nov. 5, presumably at Beijing's instruction.

Such an abrupt IPO cancellation "wouldn't happen in Japan," Toshiyasu Iiyama, deputy president at Nomura Securities, said at the forum. "Predictability of the rules is important."

Tong's concern is shared by businesses in Japan.

"Japanese businesses are concerned that their access to information has been curtailed by the national security law," said Seiji Imai, senior managing executive officer at Mizuho Financial Group.

"Hong Kong will strengthen its role as China's financial center," Imai points out, as Chinese companies seek to raise capital and financing in the territory. He said that Hong Kong's integration into China had long been expected but added that it is now taking place at an accelerating pace. "In the long term, the standing of Hong Kong could decline" due to tighter control by China, concern about judicial independence, free access to information and an exodus of talent, Imai added.

Lawyer Yuri Suzuki, who is a senior partner at law firm Atsumi & Sakai, adds that such fundamental rights are sometimes taken for granted, but they are vital considerations for investors.

"You used to see books critical of the authorities in Hong Kong. Such books are now no longer seen in the bookstores," Suzuki said.

Some experts argue that Hong Kong's changing status should present an opportunity for Tokyo to attract investors and financial players.

Japan has advantages, including a global reserve currency, the yen, and a central bank in the Bank of Japan that has direct access to the U.S. and European central banks, meaning it is thereby able to serve as a financial backstop during a time of a crisis, said Hiroshi Nakaso, former deputy governor of the BOJ.

"If you look at the opportunities and advantages that Tokyo has, there is no reason why we should not see" more financial flows into Tokyo, said Suneel Bakhshi, chairman of the Japan Advisory Group at the London Stock Exchange. 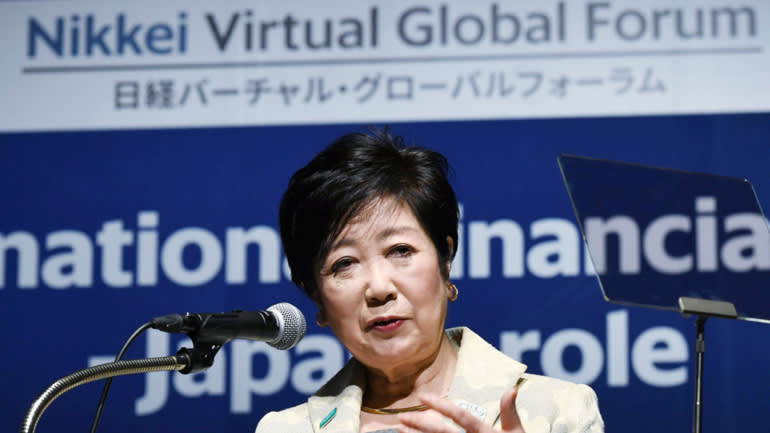 Tokyo Gov. Yuriko Koike has a vision to make Tokyo a more attractive city to foreign businesses, including financial institutions, and use it as an engine of growth for the capital city and the country.

"This is our last big chance to establish Tokyo as a financial hub for Asia, and for the world," Koike said at the forum.

Japanese business leaders are of a similar mind.

"The population is declining in Japan. Tokyo must win a competition to attract the Asian head offices of foreign companies or it won't have a future," says Shingo Tsuji, president and CEO of real estate developer Mori Building,

"There is a role that Tokyo can play. We will compete with Singapore more," said Keiko Tashiro, deputy president of Daiwa Securities Group. "Singapore is very competitive. The government is very competitive, (but) we've been looking into what we need to do," Tashiro said.

"We need more (international) schools, We need to do something about taxation, which is something [in which] Singapore has a great advantage," she added.