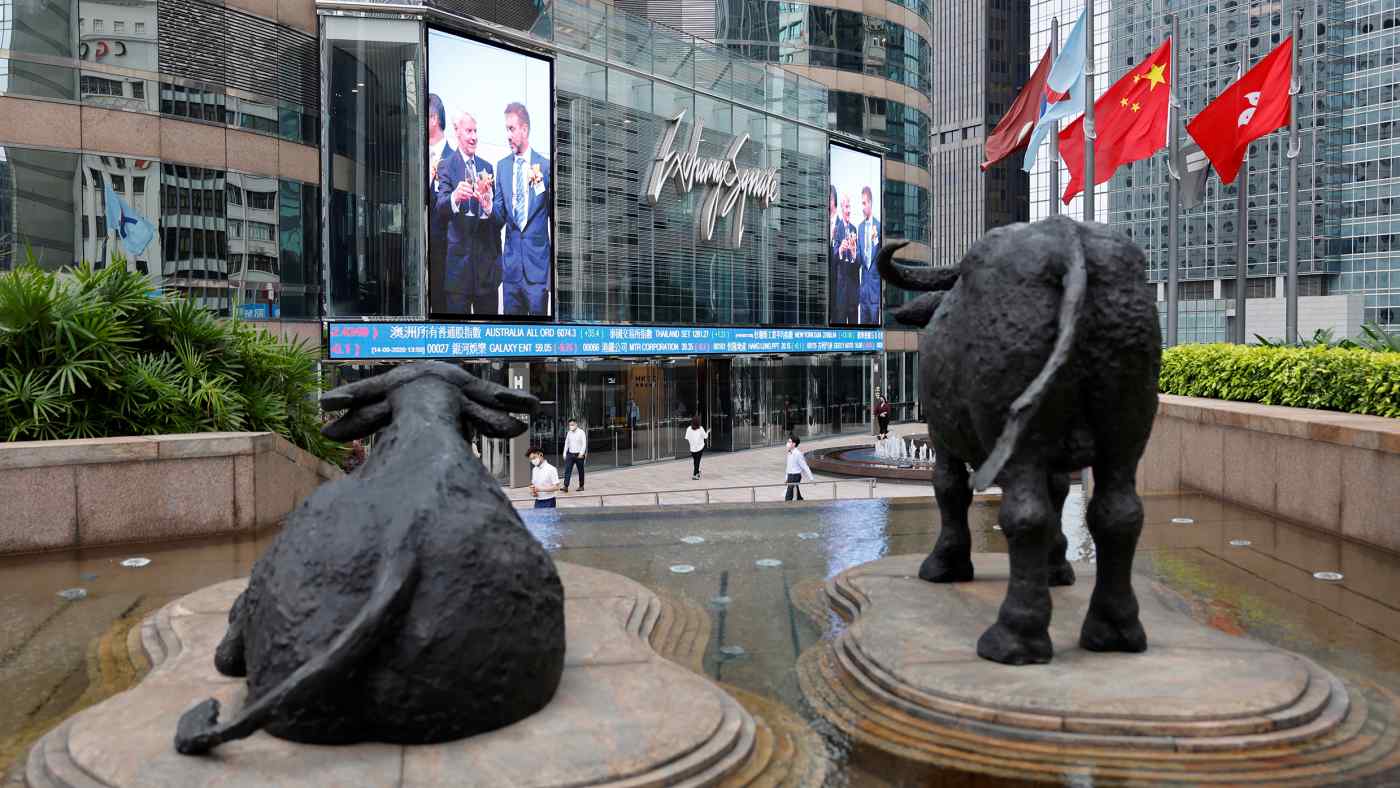 Traders expect the trend to accelerate as Ant, the world's most valuable fintech, marches towards what is shaping up to be the largest ever initial public offering. The share sale, which is expected to be at least $30 billion and could reach $35 billion according to some estimates, is expected early next month.

The deluge has prompted the HKMA -- the city's de facto central bank -- to intervene almost every day since Sept. 14 to keep the currency within the pegged trading band of 7.75 to 7.85 against the U.S. dollar, boosting domestic currency liquidity to a three-year high.

"I haven't seen such investor anxiety in my [five years] in Hong Kong," said a person involved in preliminary discussion with potential investors over Ant's offering. "Everyone I have spoken to says they are building cash reserves either by moving cash or selling existing investments to be ready when the offering opens." 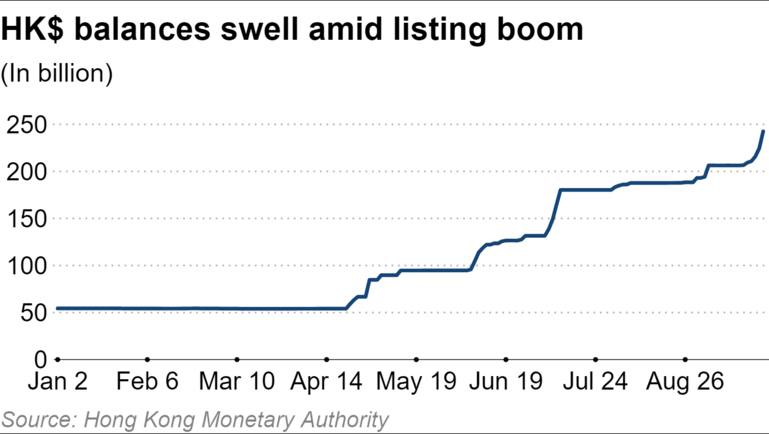 The scramble for the local currency is also starting to show up with short-term borrowing costs climbing to a three month high.

"While there is a seasonal element to the rise as bank demand for cash increases as the quarter end nears, the IPO activity is the main driver this time," said Ken Cheung, chief Asian FX strategist at Mizuho in Hong Kong. "Multi-year high liquidity should keep a lid on the increase but the trend is clearly higher given the size of the Ant offering."

The one-month Hong Kong Interbank Offered Rate -- the rate at which banks lend to each other -- touched 0.54% on Tuesday, the highest since June, after climbing for six consecutive days. It was quoted at 0.51% on Thursday.

The spread to the one month U.S. dollar Libor rate, another interbank rate, also reached a three-month high, indicating demand for the local currency.

That came as the HKMA's aggregate balance, a key gauge of the amount of cash in the banking system, reached HK$242.5 billion, the highest since September 2017. The measure stood at HK$187.8 billion on Aug. 24, a day before Ant filed its prospectus.

Traders anticipate the measure to tick up further as the Ant IPO approaches, with inflows seen at multiple times the shares on offer.

While Ant has not disclosed how it intends to split its offering between Hong Kong and Shanghai, people familiar have said it could be evenly divided or even turn out to be slightly higher in the former if preliminary roadshows indicate "overwhelming" demand. That is because existing investors can only sell in Hong Kong, with the Shanghai leg restricted to new stock.

Liquidity typically tightens ahead of large and sought after transactions in Hong Kong where retail subscription for recent offerings such as bottled water maker Nongfu Spring's $1.1 billion IPO has topped 1,000 times the shares on offer.

Institutional investors have also been aggressive, with companies such as online retailer JD.com in June attracting bids for more than 11 times the shares available.

When Alibaba opened for subscriptions for its $12.9 billion secondary listing in Hong Kong in November 2019, short-term borrowing costs rose across the curve with the one-month rate shooting up by 100 basis points. Back then, liquidity in the banking system was about a fifth of current levels.

Since then, a surge in initial public offerings and "homecoming" listings by U.S.-traded Chinese companies -- amid worsening relationships between Beijing and Washington -- have underpinned the currency.

Six companies including Alibaba and Yum China, operator of KFC restaurants in the mainland, have raised more than $20 billion since November. A further 36 Chinese companies listed on the New York or Nasdaq stock exchanges are eligible to list in the city based on Hong Kong exchange rules.

The currency peg was introduced in 1983 to stop a rapid fall of the then free-floating currency, as the U.K., which then ruled the territory, discussed the city's future with China. It is backed by foreign exchange reserves held in a currency board managed by the HKMA.

The HKMA has a mandate to buy up U.S. dollars for Hong Kong dollars when inflows push the exchange rate to the trading band's upper limit of HK$7.75 per U.S. dollar. When there is a rush of outflows, it does the reverse. The HKMA last stepped in to prop up the currency in April.

Since touching a low of HK$7.84 for each U.S. dollar in August last year, the currency strengthened to HK$7.79 at the end of 2019 and currently trades at the stronger limit.

The peg has held its ground despite concerns about capital outflows and bets by traders that social unrest in the city and China's creeping control would spur capital flight, drive up interest rates and bring about the demise of the currency policy.

The Hong Kong Monetary Authority and the government have reiterated that the peg will stay.

"In the short to medium-term, large bond sales by companies and IPOs such as Ant will continue to bring in capital and bolster demand for the local currency," said Alicia Garcia Herrero, chief Asia Pacific economist for Natixis in Hong Kong. "While there could be some volatility after such big offerings, the trend of more Chinese companies looking at secondary listings in the city would lend support."