Investors swarm to China fintech as Ant and Lufax debut HONG KONG -- Investors this week showed an insatiable appetite for Chinese financial technology stocks, splurging record amounts of cash on two initial public offerings in Hong Kong and New York, each promising a slice of a fast-growing segment of the world's second-largest economy.

Ant Group, which is wrapping up the world's largest IPO, lured more than $3 trillion worth of retail investor orders between the Shanghai and Hong Kong portions of its offering.

By the close of the retail subscription period in Hong Kong midday Friday, about 1.5 million people had submitted orders for close to 400 times the shares on offer, according to two people familiar with the matter.

Lufax, a rival online financial services platform backed by Ping An Insurance Group, debuted on the New York Stock Exchange on Friday after raising $2.36 billion in the biggest U.S. offering by a Chinese company so far this year. It priced its shares at the top end of a marketed range of $11.50 to $13.50 each. The stock opened 14% lower in the morning and closed at $12.85. The Dow Jones Industrial Average ended down over 150 points Friday.

Investors are betting the two companies will gain from the surge in demand for credit, investment and insurance products as China promotes domestic consumption and small businesses. The largest mainland Chinese lenders have struggled to serve such clients, paving the way for the likes of Ant and Lufax to grow. 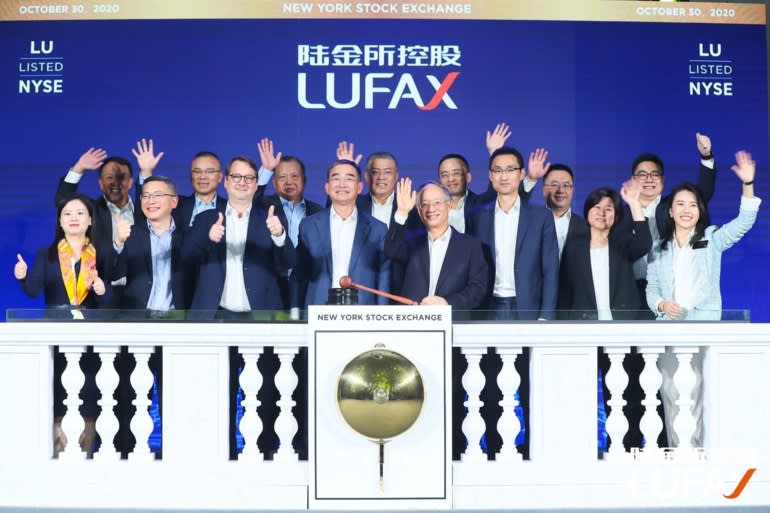 "Ant and Lufax are among the top fintech players in China, and investors have been waiting for a long time to invest in these names," said Ke Yan, head of research at Singapore-based DZT Research. "The two companies are primed to grab the growth opportunity. The interest from some of the largest fund managers and sovereign wealth funds just illustrates IPO valuations were attractive."

Alibaba Group Holding-backed Ant, which started from online payment service Alipay, has since evolved into a digital finance platform offering everything from loans and travel bookings to mutual funds and insurance policies. Post-IPO, Ant will become the most valuable financial services company in the world, ahead of JPMorgan Chase and the largest Chinese lenders.

Lufax, an online wealth-management and retail-lending company, is valued at $33 billion. It closed its book-building on Wednesday, a day early, on heavy demand from investors.

Asked about the company's decision to list in the U.S., Lufax CEO Gregory Gibb told Nikkei Asia that the NYSE is the No. 1 global listing exchange "at the heart of the capital markets."

Lufax is "pleased to find a welcoming home on the New York Stock Exchange," Gibb said in a written response.

"Lufax's business is not limited to mainland China," he wrote. "The U.S. listing can better help Lufax to promote global development and enhance Chinese brand awareness."

The company has no operations in the U.S. but has expanded into Singapore, Hong Kong and Indonesia in recent years. "While our income from international operations is not yet material to our company as a whole, we intend to build on our initial presence in Singapore and Hong Kong to better address the pool of investable assets held by wealthy overseas Chinese throughout the region, while exploring partnerships with Asian financial institutions to best navigate local regulatory and market environments," Gibb wrote.

"Investors just love Chinese fintechs," said a person involved in the Ant transaction. "Be it Ant or other fintechs that we have shown to them, they are eager to grab a portion of the IPO. We have been overwhelmed by how they want to know about the company and the prospects for the sector."

On Thursday, Ant said that retail subscriptions for the Shanghai portion of the IPO reached 872 times of shares on offer. Ant could raise about $39.6 billion if a 15% overallotment option is exercised for both parts of the IPO.

The company closed its Hong Kong institutional book-building on Wednesday, also a day earlier than planned.

Ant has set a price of HK$80 a share for the Hong Kong leg of the $34.5 billion IPO and 68.8 yuan a share for Shanghai. Trading is set to begin in both cities' exchanges on Nov. 5. In its prospectus, Lufax estimated that the unmet financing demand of small businesses in China was about $7 trillion and said fintech companies like it -- armed with customer data and artificial intelligence -- were plugging the gap. These companies also are helping salaried workers with needs not met by credit cards and traditional loans, it said.

Ant and Lufax are positioning themselves as virtual malls for financial services. Most of the financial products they offer are provided by third parties that pay fees on the sales they get through the two companies' platforms.

The growth of such business has boosted profit margins for both Ant and Lufax.

Ant's net profit margin soared nearly tenfold in the first half of this year to 30.2% while that of Lufax rose to 28.3% in the six months ended June 30 from 21.7% in 2017, according to their prospectuses.

Credit to small businesses in China stood at 6 trillion yuan ($893.5 billion) at the end of 2019 and is set to climb more than quadruple to 26 trillion yuan by 2025, while personal investable assets are expected to nearly double to 287 trillion yuan during the same period, according to consulting firm Oliver Wyman.

While the growth opportunity for fintechs is clear, analysts cautioned that they face a volatile regulatory environment, and rapid growth could unnerve the state-run banks, which will in turn demand authorities protect their turf.

Shortly after Ant filed its prospectus in August, Chinese regulators unveiled a flurry of rules to curtail risk in the digital-lending sector. New rules include a limit on use of securitization to fund consumer loans, a cap on loan rates, and new capital and license requirements for financial conglomerates.

Lufax, which started as a peer-to-peer lender, transformed itself into a fintech platform after China clamped down on the P2P sector in 2017.

"The Chinese government believes fintech is a growth area and the untapped market is huge enough to give years of expansion for the likes of Ant and Lufax," said Andrew Collier, managing director of Oriental Capital Research in Hong Kong and previously president of Bank of China International USA.

"At some point, the state-owned banks are going to protest and ask for rule changes," Collier said. "Regulators have also been wary of the rapid growth of such players and inevitably will force new regulation to clamp down on risk."