HONG KONG -- Ant Group, Alibaba's financial technology affiliate and operator of China's largest digital payment network, has filed to sell shares on the Hong Kong Stock Exchange and Shanghai's STAR Market in what is shaping up to be the world's largest-ever initial public offering.

Ant, which carries a valuation of $200 billion and is the world's most valuable fintech company, will sell at least a 10% stake, split between the two markets, it said in filings to the two exchanges on Tuesday.

"There is no doubt that Ant could raise a huge IPO," said Tian Jie, an analyst with consulting company Analysys International in Beijing. "Ant's IPO is viewed as iconic for both Hong Kong and mainland Chinese stock markets. Both markets welcome a blockbuster."

While the IPO applications did not specify Ant's fundraising target, two people familiar with the transaction said it was looking to sell about $30 billion worth of shares depending on market conditions. At that level, the listing would top state oil producer Saudi Aramco's record-setting $29.4 billion IPO at the end of 2019.

The inner workings of Ant's finances had been closely guarded until now. The company's preliminary offering prospectus shows how its business focus has been diversifying away from its Alipay mobile payment system and direct provision of financial services. The company recently changed its name from Ant Financial Services Group.

Digital payments and merchant services, which accounted for 51.7% of revenue in 2018, only accounted for 35.8% of receipts in the first half of 2020 as Ant's digital financial technology platform took a 63.4% share. This newly dominant segment covers service charges collected from other companies offering financial products on Ant's mobile platform. 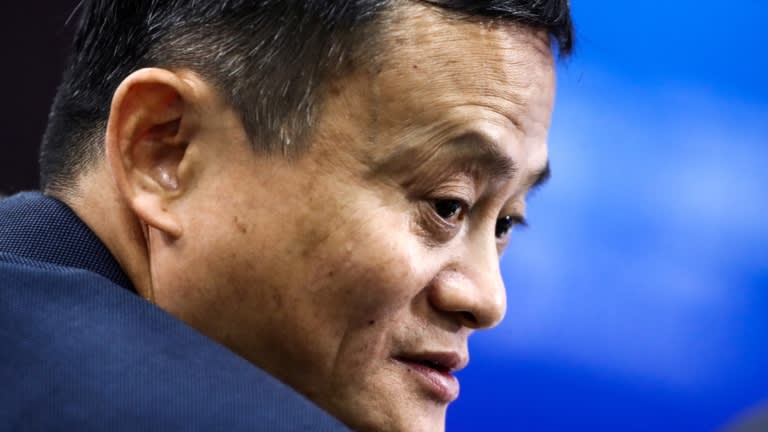 Alibaba founder Jack Ma will retain control of a 50.5% stake in Ant through his control of the general partner of two investment partnerships, but he holds no official role at Ant.   © Reuters

The shift is expected to reduce Chinese regulatory pressures on Ant, which previously came under scrutiny for its Yu'E Bao money-market fund, which became the world's largest by providing outsized investment returns from customers' idle Alipay balances.

In its prospectus, Ant warned that China's plans to roll out a digital currency could affect its payments business, noting that details of the digital currency electronic payment project, or DC/EP, "remain unclear."

"We do not have sufficient visibility as to the impact of the DC/EP on consumers' payment behavior and the payment industry," it said. This month, the Ministry of Commerce said the DC/EP test would expand across the nation's three leading urban clusters, centered on Beijing, Shanghai and the southern cities of Guangzhou, Shenzhen and Hong Kong.

Alipay's transaction volume reached 118 trillion yuan ($17.1 trillion) in the 12 months to June 30, with its app boasting 711 million monthly active users, according to the prospectus. More than 80 million merchants used the app.

Ant's IPO would be the first offering to be held simultaneously on the two greater China exchanges, which have been vying over the past year to lure the country's top-flight tech companies following reforms of listing rules. The competition comes amid U.S. moves to curtail the companies' access to New York's stock markets, long their favored destination.

"Beijing clearly wants 'homegrown champions' to float on domestic exchanges, and Ant is ready to comply," said Brock Silvers, former managing director of Kaiyuan Capital, a private equity firm in Shanghai. "China is in the middle of a sustained run of IPOs, most of which haven't warranted the excitement that is sure to accompany Ant Group's new listing."

Alibaba Group Holding, which owns a third of Ant, listed on the New York Stock Exchange in September 2014 in what was then the largest-ever IPO. The U.S. Securities and Exchange Commission opened an investigation in 2016 into Alibaba's accounting practices. Audit reviews remain the focal point of tensions over Chinese listings in the U.S.

In the wake of recent moves by the administration of President Donald Trump to curtail transactions with Chinese tech companies, including Huawei Technologies, ByteDance, Tencent Holdings and Hikvision, Ant warned in its prospectus that it, too, could become a target and lose access to technologies or the U.S. market.

Alibaba founder Jack Ma retains control of a 50.5% stake in Ant through his control of the general partner of two investment partnerships, but he holds no official role at Ant.

According to the prospectus, Ma last week transferred two-thirds of his holdings in the general partner to Ant Chief Executive Eric Jing and two Alibaba executives, while retaining 34% and ultimate control. The document said Ma will donate his economic interest in another block of equity to charity in the future.

Chinese state investors, including the National Social Security Fund and China Life Insurance, have a combined stake of around 10% in Ant, according to the filing.

Ant plans to use the proceeds to expand its user base both at home and abroad and invest in research and development. It has been extending its reach in Asia by partnering with payment startups, including Paytm in India and GCash in the Philippines. In China, it is building out consumer and technology services, including cloud computing, artificial intelligence, blockchain, robo advisory and loan advisory.