For the year ended March, overseas business accounted for about 40% of MUFG's net operating profit. The probability is that domestic lending operations will continue to deteriorate due to Japan's low interest rates. Meanwhile, acquisitions like the Bank of Ayudhya of Thailand and Union Bank of the U.S. are starting to contribute to profits.

MUFG to appoint its first foreign external board members

Big Japanese banks bulging at the seams with pent-up cash

In its midterm management plan, which covers the three years from fiscal 2018, MUFG sees the net operating profit at its overseas division generating about 50% of the total.

To cater to this shift the group will undertake its largest reorganization since Bank of Tokyo-Mitsubishi UFJ, the group's flagship company, was founded in 2006. The conglomerate will tear down the wall between its corporate and international divisions in fiscal 2018.

Kanetsugu Mike, president and CEO of BTMU, explained in an interview that the group cannot become truly global as long as it separates its overseas activities under an "international" division.

JPMorgan Chase generates about 50% of its revenue overseas, while the figure stands at 70% for HSBC. Nobuyuki Hirano, president and CEO of MUFG, is shooting for HSBC-like status. MUFG decided to take the acronym route with its name based on its respect for HSBC, which formed its name from subsidiary Hongkong and Shanghai Banking Corp.

MUFG expects the restructuring to reduce its dependence on domestic operations and make it more competitive in the cutthroat world of international banking. 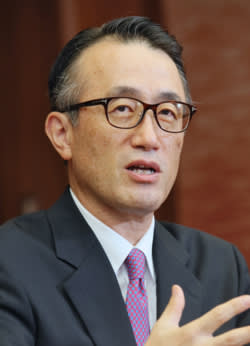 Kanetsugu Mike, president and CEO of Bank of Tokyo-Mitsubishi UFJ

MUFG has globalized more than Japan's other megabanks, which get about 30% of their profits from overseas. At the same time, MUFG remains more dependent on its domestic operations than do its foreign rivals.

Japanese financial institutions have ventured out into the global sphere before, most famously when Nomura bought the Asian and European assets of the bankrupt Lehman Brothers in 2008. But Nomura could not get out of the red as it struggled to rein in costs and was forced into multiple rounds of lay offs.

MUFG believes that its measured approach, building local business through its foreign subsidiaries, Bank of Ayudhya and Union Bank, will lead to more positive results.

Among the hurdles ahead are compliance costs, which will weigh on MUFG as it endeavors to follow the regulations in each market in which it conducts business. The banking organization is re-examining its domestic operations, too, with plans to review its system for small businesses, which make up the bulk of its 350,000 clients in Japan.

Mike said MUFG is trying to consolidate a complex structure in which branch officers deal with company owners and founding families while bankers from the head office deal with these companies' financial needs.

A private banking unit that is to provide wills, trusts and other wealth-management services will be established and operate across the boundaries of the group's bank, brokerage and trust bank businesses.

MUFG's corporate lending business will also be streamlined. In addition, the group plans to digitize and cut its workload by 30% by fiscal 2023.