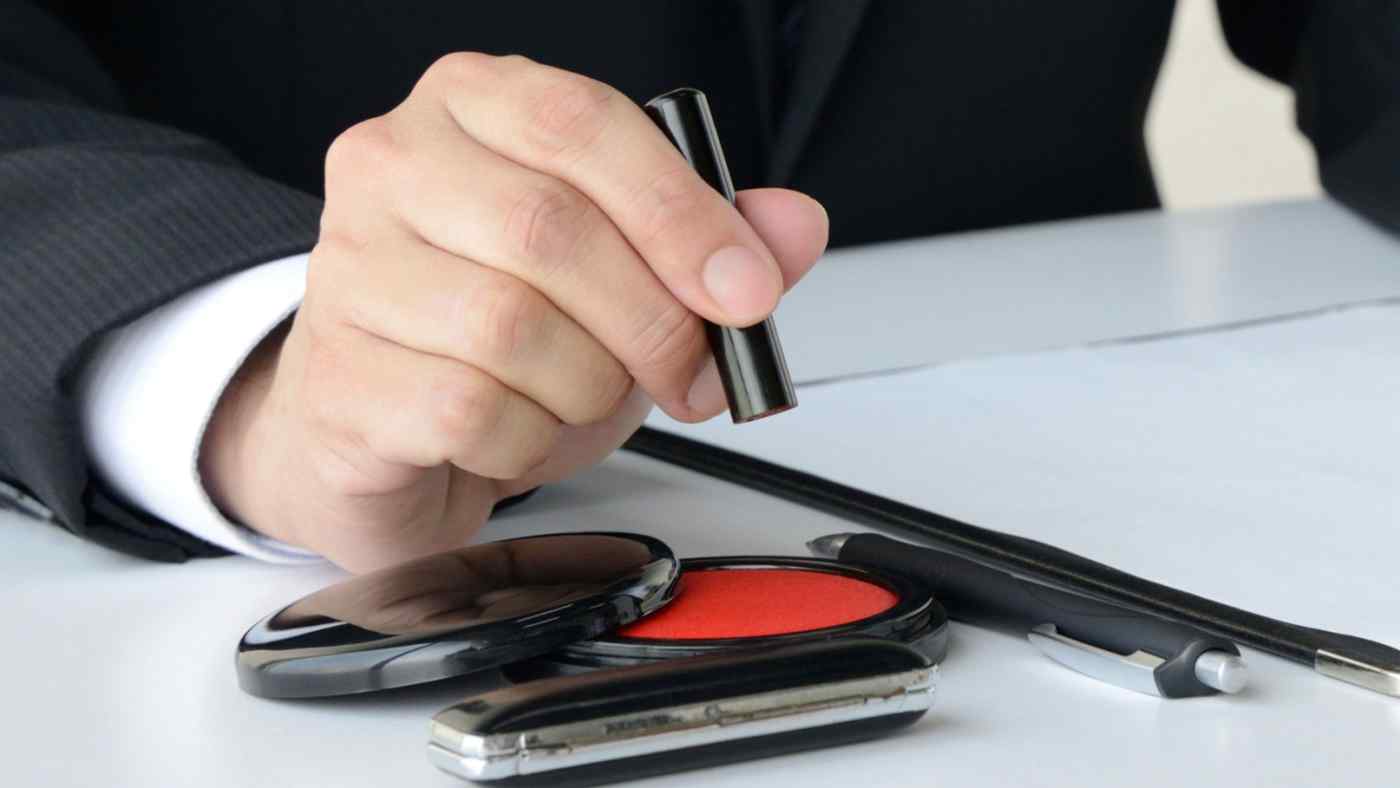 'Hanko' seals have been widely used in Japan since at least the nineteenth century as a way to authenticate contracts.
MITSURU OBE, Nikkei staff writerAugust 1, 2020 18:28 JST | Japan
CopyCopied

TOKYO -- SMBC Nikko Securities, a top Japanese brokerage house, will allow clients to open an account without the need to provide hanko seals on their contracts at all its branches starting this month. All they will need is a Nikko sales representative to fill in a form on an iPad and take photos of their IDs using the tablet.

The digital form sends an alert when it is not filled in properly, eliminating any need for it to be refiled. Information about how to invest in the account will be sent by email. "It improves both customer satisfaction and business efficiency," said an SMBC Nikko spokesperson.

Efficiency matters to SMBC Nikko, the brokerage and investment banking arm of Sumitomo Mitsui Financial Group, as it tries to offset a revenue slump related to the coronavirus pandemic with cost cuts. During the April-June fiscal first quarter, its net operating revenue fell 2% from a year before. But with a 4% reduction in operating costs, the brokerage house managed to report a 27% increase in net profit to 6.4 billion yen ($61m).

Hanko seals have been widely used in Japan since at least the 19th century as a way to authenticate contracts. The need for a stamp on contracts has been a reason why paper still proliferates financial transactions in Japan. But financial institutions are moving away from the tradition amid the pandemic and the recession.

The government of Prime Minister Shinzo Abe is now leading efforts to end the hanko practice, declaring that the government would use electronic signatures more widely in its own contracts. In June, the government published clarifications that e-signed documents carry at least as much legal weight as those with a hanko seal, and are arguably more secure.

The need to affix a seal on a document has sometimes made working from home difficult. For example, a working mother seeking a nursery place for her child has to provide proof of employment, which requires a company seal.

Digitization is inevitable amid the pandemic, which shows no signs of abating in Japan as daily cases surged to new highs this week.

"There are still customers who want to avoid in-person consultations," said Kazuhiro Notsu, senior managing director of SMBC Nikko, in a news briefing on Wednesday. "We haven't been able to do sales activity in the same way as we did before."

"We took emergency cost-cutting measures in the first quarter. A separate medium-term cost-control program is also in progress," he added.

Daiwa Securities Group has been offering a hanko-free account since late last year. Its sales representatives carry a Microsoft Surface Pro tablet when they visit customers. The sales representative takes a photo of the customer's ID, then an app in the tablet picks out information such as the customer's address and date of birth, sending this on to Daiwa's back office for further processing. "It has cut the time needed for opening an account in half, to 30 minutes," said a Daiwa spokesperson.

Daiwa is well ahead of the pack when it comes to digitization. Its sales agents use the Surface Pro not just for creating accounts, but also to show charts, have online consultations, and receive and execute orders, all while they are out in the field.

Complex financial products, such as mutual fund wraps and structured bonds, still required agreements and confirmations in paper in the April-June period, but Eiji Sato, Daiwa Securities Group chief financial officer, said that even order placements for such products were digitized now. "We are prepared for the 'with corona' environment," he said in a news conference on Friday. "We will accelerate the digitization drive to raise our productivity."

He said Daiwa's customers, who are usually in the older age brackets, had also grown used to digital technology following the pandemic. They have learned to use video conferencing services like Zoom and other technologies to stay in touch with their children and grandchildren remotely, he added. "More and more of our clients are ready to hold consultations online," Sato said.

Daiwa Securities Group reported a 9.2% increase in net profit in April-June, despite a 1.6% drop in net revenue.

Sales agents at Nomura Securities have been using iPads for hanko-free account opening since last year. Nomura's retail sales force had not been known for its digital savvy, but the first annual loss in a decade last year has forced the group to pursue efficiency more aggressively. During April-June, its sales reps mounted a phone call campaign and have achieved a surge in retail orders for exchange-traded funds, lifting Nomura Holdings' net profit by 2.6 times to 142.5 billion yen in the period.

Banks are also moving away from using hanko seals, albeit more gradually.

Among them, Resona Bank is a front-runner. Resona and its affiliated Saitama Resona Bank have enabled customers to open an account and conduct most transactions without hanko seals at all branches since 2018.

Sony Bank, a unit of Sony, launched an app in March allowing foreigners to open an account in English and without a hanko seal, making banking services more accessible to people not familiar with the Japanese language or culture.

Most other banks, however, still ask customers to register a seal when they open an account. The registered seal becomes necessary for transactions including taking out a loan or making large transfers. Masatsugu Yoshioka, a Cabinet Office official responsible for financial sector deregulation, says the "hanko-less movement has to reach loan contracts."

At Sumitomo Mitsui Banking Corporation, people can open an account without a seal, but they will be asked to supply one later. Mizuho Bank says that a seal is not necessary for online-only accounts, but for a regular branch account, it is still required.

"Some banks have done away with hanko seals for retail transactions, and we expect to go in the same direction," a Mizuho official said.