Japanese megabanks use M&As to establish beachheads in SE Asia

TOKYO -- Two Japanese megabanks are poised to explore the Southeast Asian market in earnest by acquiring local banks. Mitsubishi UFJ Financial Group (MUFG) last December purchased a 72% stake in Thailand's fifth largest bank Bank of Ayudhya Public (BAY), while Sumitomo Mitsui Financial Group (SMFG) acquired last May about 24.26% of the outstanding shares in Bank Tabungan Pensiunan Nasional (the national pension savings bank), a midsize commercial bank in Indonesia known as BTPN. It remains to be seen which country is the better choice as a foothold in the potentially lucrative market.

A first for Thailand

In BAY's gigantic head office building by the Chaophraya River in central Bangkok, task force meetings have been a common occurrence since the beginning of the year. About 15 Japanese officials dispatched by MUFG and several staff of the Bangkok branch of Bank of Tokyo-Mitsubishi UFJ (BTMU), the core banking unit of MUFG, joining the meetings. At the meetings, the 12 task forces in charge of personnel matters, business deals, retail transactions and other affairs, hammer out strategies for their operations. 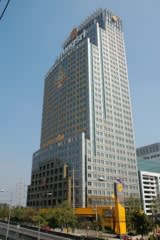 "Thanks to the approval (of the Thai banking regulatory authorities) for our purchase of a majority of BAY shares, we have been able to capitalize on a rare opportunity to acquire this big bank," said Takashi Morimura, BTMU's deputy president. BTMU, Japan's largest bank, decided in July last year to buy a more than 50% stake in the Thai bank, including the 25.33% owned by GE Capital International Holdings, a financial arm of General Electric of the U.S. which had been the largest shareholder of BAY. The purchase was made through a voluntary tender offer (VTO), which the Japanese bank completed on Dec. 13 last year, becoming the first foreign company in Thailand to acquire a major local bank as its subsidiary. The total investment was 536 billion yen ($5.12 billion).

On Jan. 2, BTMU Executive Officer Noriaki Goto assumed the post of CEO of the Thai bank, which had been occupied by an official from GE. All the other executives from GE were also replaced by MUFG personnel. Along with the management reshuffle, task forces at BAY are stepping up their activities. One of the most important issues facing the task forces is to combine the operations of BTMU's Bangkok branch and BAY. The Bank of Thailand, the country's central bank, which oversees banks in the nation, sought to apply its "one presence policy" -- a financial group is not allowed to own more than one bank -- as a condition for its approval of MUFG's acquisition of BAY. Therefore, the Japanese bank is required to merge its Bangkok branch and the Thai bank.

Although it is a branch, BTMU's Bangkok unit has assets as large as those of a second-tier bank in Thailand, at 200 billion baht ($6.2 billion). Furthermore, the branch, which was established in 1962 as a branch of the former Bank of Tokyo, one of the predecessor banks of BTMU, has been boosting its lending in recent years on the back of demand from about 1,500 Japanese automobile-related and other companies operating in Thailand. Combining the branch and the Thai bank, which have entirely different corporate cultures, including pay scales, decision-making methods and business practices, is an enormous task entailing considerable cultural conflict.

Meanwhile, SMFG acquired about 25% interest in Indonesia's BTPN last May, investing 92 billion yen. It intends to raise its stake to 40% after obtaining the approval of Indonesia's financial authorities. Bank Indonesia, the nation's central bank, which was Indonesia's banking regulatory authority until last December, is reluctant to permit a foreign company's sizable investment in the country's financial sector. After Singapore's leading bank group DBS Group Holdings attempted in 2012 to put Indonesian bank PT Bank Danamon Indonesia under its wing, financial protectionism flared up in Indonesia, leading to a new law in the summer of 2012 to limit foreign ownership of local banks to 40%.

Since Singapore and Malaysia restrict foreign investment in their financial institutions, "in terms of reciprocity, we are unwilling to accept even 40% investment," said a BI official, underscoring the fact that Indonesia is especially sensitive to investment by neighboring countries' companies in its banks.

Japan has a track record in this regard, having allowed an Indonesian bank to operate in the nation, so Indonesia would not bar a Japanese bank from taking 40% of an Indonesian bank, based on the reciprocity principle. Yet, Indonesia is cautious about permitting investment in local institutions by non-Southeast Asian foreign banks too, with some foreign banks left waiting for approval.

Woori Bank of South Korea was allowed to purchase a stake in an Indonesian bank recently and the bank supervision authority was transferred to the Financial Service Authority, or OJK, in January. So SMFG anticipates that the bank will be granted approval to increase its ownership of BTPN to 40% before long, but the situation remains murky.

In Indonesia, unless an acquirer holds a 40% stake in a firm and is regarded as the controlling shareholder of the firm, it is difficult for the acquirer to send its officials to an acquired bank as its executives and to coordinate a management strategy with the acquired bank. SMFG is still waiting to become a controlling owner.

Since Jerry Ng, the former deputy chairman of the Indonesian Bank Restructuring Agency, was installed as president director of BTPN, the bank has expanded its operations by increasing lending at a faster pace than its larger domestic rivals, partly thanks to the deftly-planned branch network under the new chief. With Takeshi Kunibe, president of Sumitomo Mitsui Banking, saying that BTPN "has encountered a good leader," SMFG intends to retain Ng as the head of the Indonesian bank and indirectly run the bank even after acquiring 40% of BTPN. SMFG is adopting a different management style from MUFG, which put a Japanese at the helm of the Thai subsidiary.

For Japanese banks, Thailand, Indonesia and other Southeast Asian nations are an untapped El Dorado. With year-on-year lending growth at the 10% level in Thailand and 20% in Indonesia, the region looks like a high-growth lending market to Japanese banks, which have long suffered slow growth in lending. Western banks are unlikely to see an increase in lending in an era of deleveraging while Chinese banks, which have enjoyed rapid growth, are expected to face sharp deterioration in their lending environment in the next few years. Against this backdrop, there is no doubt that Southeast Asia has a relative advantage for lenders.

In the region, banks also enjoy healthy net interest margins -- the difference between lending and deposit interest rates. While the margin is 1.0-1.5% in Japan, it is around 3 percentage points in Thailand and 3-4 points in Indonesia where BTPN's margin comes to hefty 12 points. Southeast Asia's dynamism is like Japan's at the height of the economic boom, when the more banks ballooned their assets the more profits they earned.

What both BAY of Thailand and BTPN of Indonesia need to do is enhance their ability to attract deposits.

BAY has expanded its assets by boosting auto loans and consumer finance since it received the investment from GE Capital and a CEO from the U.S. company in 2007. As a result, the amount of lending at BAY has surpassed that of deposits, in stark contrast to all top four banks in Thailand witnessing deposits in excess of lending. The number of BAY's branches, about 600, is also far below the average 1,000 for the top four banks. BAY is burdened with costs of raising funds in the market, but if the bank can augment the amount of deposits, its profitability will surely improve.

In the meantime, Indonesian financial institutions, compared to their Thai counterparts, have not yet sufficiently penetrated into the population, with no more than 70% of Indonesians having bank accounts. This means Indonesia has larger room for growth for banks. Especially BTPN, which has primarily handled the payment of pensions, is appealing for retired government employees and military personnel who are pension beneficiaries.

Another problem in common with BAY and BTPN is a possible further downturn of the already decelerating Thai and Indonesian economies. Amid the weak stock markets in the two nations, BAY shares plunged to the 27 baht ($0.82) level immediately after the completion of the VTO by the MUFG, down 30% from the VTO price of 39 baht. The stocks then recovered to 32 baht by mid-January. Still, MUFG has incurred an unrealized loss of about 90 billion yen from its shareholdings in BAY. The price of the BTPN stocks also fell about 25% between last May, when SMFG bought in the bank, and mid-January, inflicting an unrealized loss of roughly 20 billion yen on the Japanese company.

As the U.S. has begun tapering off its quantitative monetary easing, investment funds will inevitably flee Southeast Asia. The capital flight is unlikely to trigger a currency crisis this time as it did in 1997, but concern lingers that the outflow of money will accelerate the economic slowdown. If that happens, a temporary increase in nonperforming loans will be unavoidable.

Unstable political situations are another negative factor for both Thailand and Indonesia. In Thailand, anti-government protesters are trying to block a general election scheduled for Feb. 2. The political tumult is beginning to impact the economy as the number of foreign tourists has already plummeted. If the confusion is protracted, it could worsen the country's economy, which is already losing steam.

In Indonesia, where a general election will take place in April and a presidential election in July this year, the current administration is becoming ineffective, with a scandal involving one of its members coming to light. Unless Indonesia can elect a new president who can push ahead with economic and administrative reforms, foreign money will keep flowing out of the country.

As a destination for Japanese banks' overseas expansion, Thailand, the economic center of the Mekong River basin, has an advantage in access to financially underdeveloped Cambodia, Myanmar and other peripheral nations.

Indonesia's strength lies in its population, which exceeds 200 million, most of whom are still not serviced by banks. With the remaining Japanese megabank Mizuho Financial Group also set to acquire or invest in a Southeast Asian bank if the opportunity arises, the future moves of Japan's three megabanks should be closely watched.